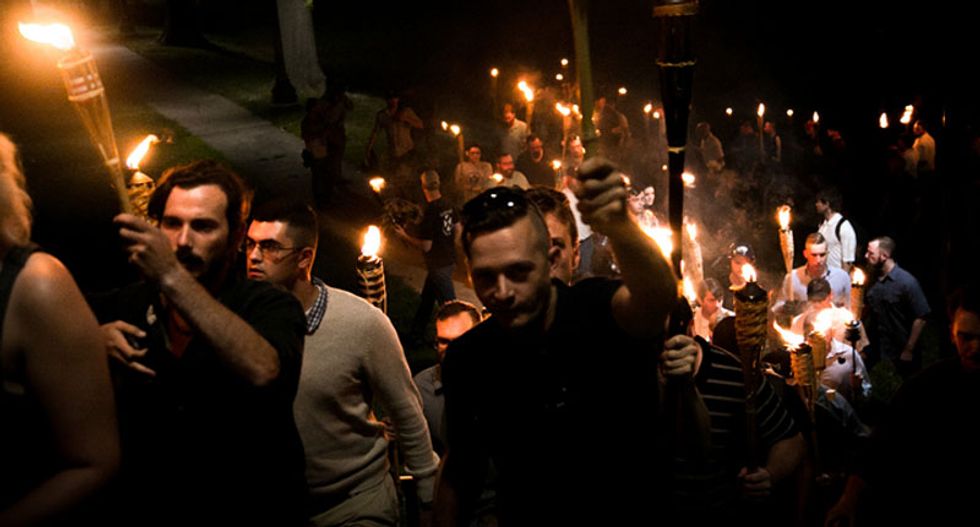 White supremacists march on Charlottesville, VA during the August 2017 "Unite the Right" rally that left a woman dead. Image via Karla Cote/Creative Commons.
As of the time of this writing, the outcome of the 2020 presidential election remains undecided. Joe Biden leads Donald Trump 238–213, per the Associated Press reports, in the Electoral College. The key battleground states of Michigan, Pennsylvania, Wisconsin and Georgia will not finish counting all of the ballots until perhaps as late as Friday of this week. Pennsylvania make take even longer. The Biden campaign remains optimistic that these outstanding ballots will be sufficient to secure victory.

Because he is a neo fascist American authoritarian, Donald Trump preemptively and falsely announced on Tuesday night that he won, and any ballots not yet counted in states where he is currently losing should be disqualified. Trump also said that he would go to the United States Supreme Court to stop votes from being counted past Election Day.

Republican attorneys and other right-wing experts on committing vote-rigging, voter suppression and electoral fraud will now take the next step in their plot to keep Donald Trump in power.

The 2020 presidential election will possibly be decided by the Supreme Court where Donald Trump's handpicked justices will follow through on their quid pro quo bargain and give him the presidency, contrary to the will of the American people.

What is actually known with great certainty about the 2020 presidential election is that white supremacy and racism have been reaffirmed and not repudiated.

Despite hundreds of thousands of people dead in the United States from the coronavirus and Trump's sabotage of the relief efforts, along with his cruelty, violence, tens of thousands of lies, treasonous behavior and destruction of the country's economy; despite the many thousands of brown and Black migrants and refugees held in his concentration camps and other detention centers; despite his vast corruption, lawbreaking, racism, white supremacy, and nativism; despite his destruction of America's and the world's environment, thereby imperiling the survival of the human race; despite being credibly accused of rape and sexual assault by dozens of women; and despite his ignorance, stupidity and overall evil, Donald Trump remains remarkably popular in the United States.

Moreover, Donald Trump has the highest base level of support in the history of modern polling in the United States. His political cult members and other followers love Donald Trump precisely because of how horrible he is and not despite it. It is a form of political sadism. Trumpism and America's current version of right-wing politics is a form of political religion binds its followers to the Great Leader and the movement in a deeply existential way.

More people have voted for Donald Trump so far than did in 2016.

What is also known about Donald Trump, the 2020 presidential campaign, and the results so far is that Trump's enduring popularity and love from his followers can largely be explained as a function of white racism and white supremacy; "racial resentment"; "ethnic antagonism"; social dominance behavior; malignant reality; pathocracy; collective narcissism, existential white racial "anxiety"; the dark triad of sociopathic and psychopathic behavior; white identity politics; and racial authoritarianism, more generally.

How are the pundits and other members of the chattering class and mainstream American news media responding to Donald Trump being so close to victory over Joe Biden in a presidential race where the conventional wisdom predicted a crushing defeat for Trump?

There is shock and awe that the voting and prediction models, were again, as in 2016, so inaccurate.

There is also visible upset and pain that the consensus and traditional wisdom among the so-called "professional" politics watchers is shown again to be inadequate for deciphering events in the Age of Trump. In essence, the mainstream commentariat and political class are experiencing (or should) a legitimacy crisis.

But the most common thread in the reactions online and elsewhere by the mainstream news media to Donald Trump being so close to securing a second presidential term is "shock" and "surprise" at the power of racism, cruelty and intolerance in America.

In that chorus of voices, there are even the "hope peddlers" who are so bold as to actually be praising America's "democratic spirit" because of record turn out as opposed to condemning how so many tens of millions of white Americans so enthusiastically voted for more white supremacy, social inequality and injustice.

So many members of the chattering class and commentariat have a deep and fundamental (and naïve) belief in the inherent goodness of America (White Americans in particular), that to admit such assumptions are incorrect is almost impossible for them. Why? It would cause too much emotional, psychological, intellectual and financial pain.

Most among them are also at a profound disadvantage in their analysis of Trumpism because most of them have refused to accurately describe Donald Trump as being a "fascist" and an "authoritarian" or to summon the moral language of "evil."

As such, those voices now have little if any credibility when or if they try to do so now.

Evil is a helpful word to use here. I have been using that language in my new book "Our Malady." There is an almost taboo-like hesitation to move into truly ethical judgments in our discussions of Trump and his movement. As long as we are avoiding discussions of good and evil then his behavior is normalized. Avoiding that language of good and evil also leaves the public with a hope that this crisis will somehow turn back to normal.

There is a psychological dynamic at work here too. If a person did not name Trumpism as evil before, then it is hard to name it as such later on. If a political commentator or other observer did not see the danger of Trump and his movement back in 2016 then they are probably not getting it correct now even at this late point.

In all, to clearly state that Donald Trump, his Republican Party and movement are committed to keeping America a type of "white space" is verboten for most members of the Fourth Estate.

Contrary to what many liberals and progressives would like to assert, Trump's white "working class" voters are not irrational. Instead, Trump's "white working class" voters have made a different calculation about what is most important to them. Here, Whiteness and the psychological wages which come from it (especially the entitlement and privilege to cause nonwhite people pain and suffering without consequences) are more important for Trump's white voters than their health, income or even lives.

As the United States and the world await the final results of the 2020 presidential election, what are some key lessons that the American news media should learn from how many tens of millions of White Americans have pledged again, as they did in 2016, their loyalty to Whiteness and white supremacy in the form of Trumpism?

Race and the color line are central to American society and life, not peripheral to it. To ignore the color line is to ignore reality. In the end, reality almost always wins.

Any discussion of politics in American politics which does not seriously consider the context of race and the color line is a priori inadequate and imprecise, if not irresponsible and a public disservice.

At present, the white racial frame and how it blinds too many members of the Fourth Estate and political class more broadly to the truth is an extreme liability, one that undermines the overall credibility of the country's news media.

The American news media should also include more true expert voices on questions of American politics, society, race and related topics, instead of the generalists who dominate the 24/7 cable news.

As the United States moves forward from Election Day 2020 to whatever may happen next, those members of the commentariat who are in shock, awe, denial, confusion pain, and experiencing other such emotions about Donald Trump's electoral success — whether or not he succeeds in his legal maneuvers — should accept the realities of the color line and race in America, and then do better in their work as supposed "guardians of democracy."