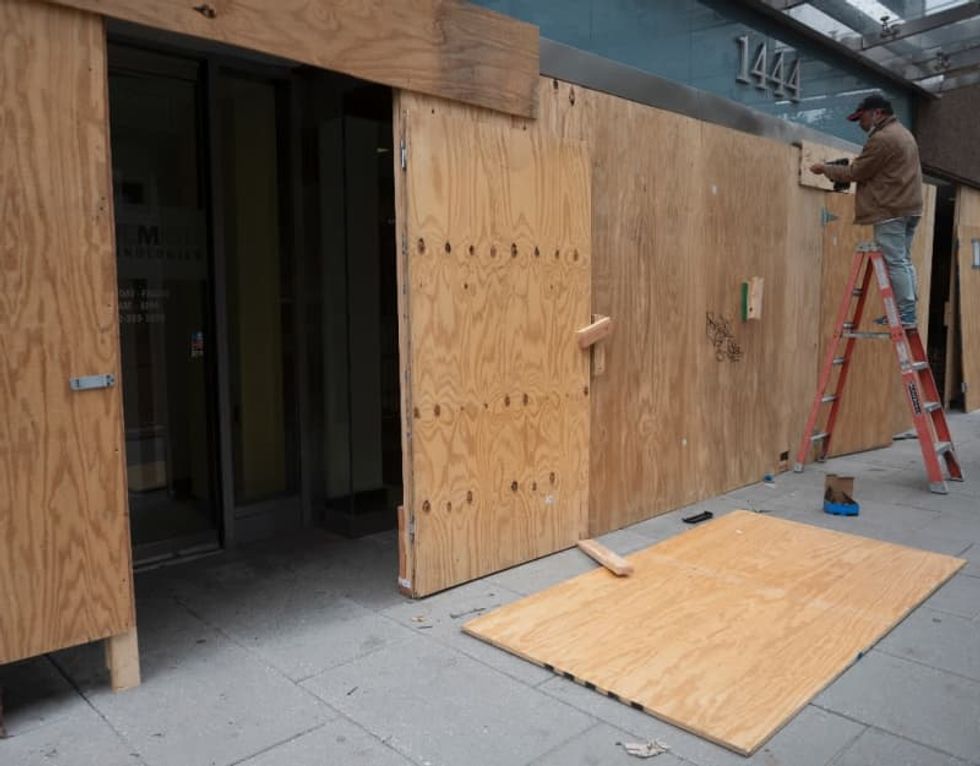 Hammers are pounding and saws are buzzing in Washington as crews board up stores amid fears that the pivotal US presidential election next week could degenerate into unrest.

All around downtown Washington, near the stately White House and elsewhere, many merchants and office building managers are working feverishly to protect their property in the tense final days before Tuesday's showdown between President Donald Trump and Democrat Joe Biden.

Shellshocked by the pandemic, economic turmoil and racial tension, the nation is on edge to a degree perhaps not seen in living memory at election time.

Americans have fresh memories of nationwide protests this summer, some of them violent, after the police killing of African-American George Floyd.

Gun sales are up, Trump has refused to state he will go peacefully if he loses and has even flirted with armed right-wing groups that back him, such as the Proud Boys, whom he told to "stand back and stand by."

More than 90 million Americans have voted early, either in person or by mail -- the latter complicating the ballot count. So it is possible no winner will be known on election night and perhaps not for days or longer.

If the results are in fact slow to be tallied, fears are that people on either side of the national political chasm will take to the streets to protest -- even with weapons -- and demand their man's rival concede defeat.

Sean Anger, superintendent of a construction company with a workforce of 60, says he has been hired to board up at least 20 buildings in recent days.

"We've done these buildings before when they had riots a couple months ago," he said, as workers covered windows with large boards sawed on the spot.

Indeed, violence broke out in downtown Washington as it did in other US cities after the Floyd killing in May triggered widespread unrest and a national reckoning on how police treat people of color and the broader issue of economic and social inequality in America.

In some cases, the boards put up then only came down a few weeks ago.

"We had a broken window on May 30, the first night of the kind of protests. There was damage to the whole street," said Kosta Abatzis, who owns a tailor shop near the White House.

"So for most of the summer into September, we had the boards up waiting for glass replacements," he added.

"I hate the way it looks, obviously, but you know it's better than having to go through the process of replacing everything."

Getting ready for the election, Washington police have announced plans to shut down streets within a large perimeter around the White House on Tuesday and Wednesday.

They have also ordered $130,000 worth of tear gas and stun grenades, said local radio station WUSA9.

Other news outlets have reported that George Washington University in downtown Washington has advised its students to stock up on food and medicine as if they were hunkering down for a hurricane.

"We also know that some people would like to cause mayhem or trouble," Mayor Muriel Bowser said this week at a news conference.

"We don't have anything specific to report to you about that, but we will tell you that we are preparing to ensure the city's safety,” she added.

Some groups are already planning rallies, such as Shutdown DC, which has sought a permit for 10,000 people to gather in the new Black Lives Matter Plaza on a street leading to the White House on election night.

It is to feature music and speeches and a large screen for people to watch the election returns come in.

But the group has also trained its members in how to interact with police if things get ugly and with counter-protesters.

"We've been training for a long time. We talk about quick decision-making and how to keep ourselves and our friends safe in the streets," said Hope Neyer, a spokeswoman for Shutdown DC.

"We're unfortunately prepared to take risks, because we recognize the importance of this moment,” she said.

Other cities are also preparing for possible unrest. In Los Angeles, stores on posh Rodeo Drive in Beverly Hills are boarding up and even closing on Tuesday and Wednesday in case looting breaks out. In Santa Monica, also near Los Angeles, a beefed up police presence is also planned.

One in three Americans is worried about the prospect of election-related violence, according to a USA Today/Suffolk University poll released this week.