African-Americans to play key role in Georgia run-offs, determining control of US Senate 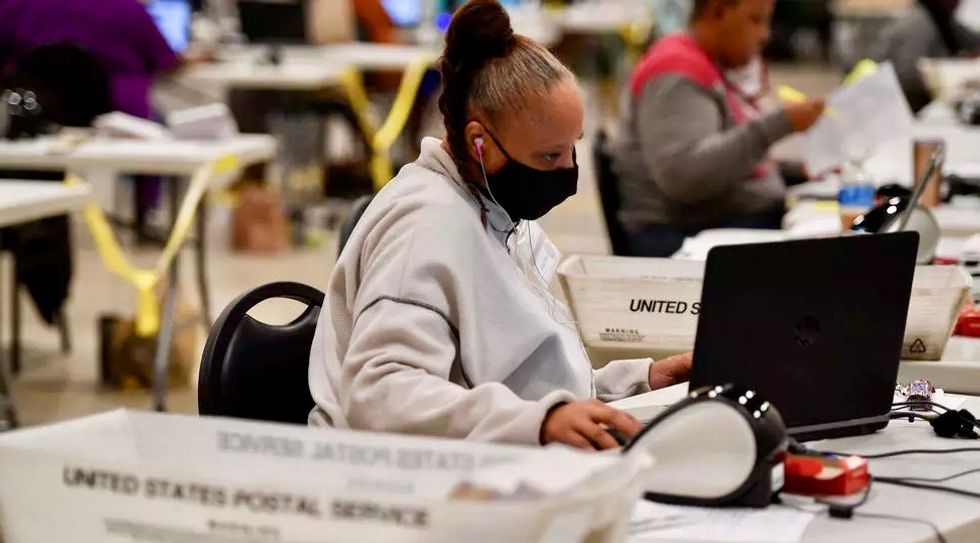 Early voting begins Monday in run-offs for both US Senate seats in Georgia, with the outcome determining whether Republicans or Democrats control the upper house of Congress. African-American voters who played a key role in President-elect Joe Biden’s upset victory in the usually Republican state will need to turn out again if Democrats hope to win both races and take control of the Senate.

In the November election, Biden became the first Democratic presidential candidate to win Georgia since former president Bill Clinton won the state in 1992.

But since no candidate in Georgia’s two US Senate races won more than half of the votes, state law requires run-offs to decide who will join the 50 Republican and 48 Democratic senators already elected to serve in the 117th US Congress. If Democrats win both Georgia races to create an even split of the 100-seat Senate, it would be Democratic Vice President-elect Kamala Harris who casts the deciding vote.

Republican incumbent David Perdue will be fending off a challenge from Democrat Jon Ossoff, a former investigative journalist and small-business owner who lost a 2017 bid to unseat a Republican congresswoman. Perdue, who was elected in 2014, refused to participate in a December 7 debate against his rival, leaving Ossoff to take questions while standing beside an empty podium.

Republican Kelly Loeffler, who was appointed by the governor to her Senate seat in early 2020, has repeatedly used a stock GOP talking point to accuse her Democratic challenger, Reverend Raphael Warnock, of being a “radical socialist”. Warnock, the senior pastor at Atlanta’s storied Ebenezer Baptist Church, has hit back at Loeffler for dumping millions of dollars in shares after taking part in a closed-door Senate briefing on the Covid-19 epidemic in January.

Biden, who defeated President Donald Trump by 12,670 votes in Georgia, flipped the state by gaining support “among affluent, college-educated and older voters” in the Atlanta suburbs, according to a New York Times analysis. The president-elect also performed as well or better than 2016 Democratic candidate Hillary Clinton in some precincts of metro Atlanta with African-American majorities.

Voting-rights activist Stacey Abrams, a former Georgia state representative who ran for governor in 2018, explained in an interview with National Public Radio how the two organizations she founded – the New Georgia Project and Fair Fight – helped increase the number of registered voters in the state. Abrams said that rights groups had registered 800,000 new voters, of whom 49 percent were people of color.

“And we have been working assiduously to get them turned out,” Abrams said.

During the 2018 gubernatorial race that Abrams lost to Brian Kemp, groups including the NAACP (National Association for the Advancement of Colored People) sued Kemp for challenging more than 50,000 voter registration forms. Almost 70 percent of the forms came from Black applicants, according to an Associated Press analysis.

Approximately 1 million African-Americans had already voted in Georgia by the end of the Friday before Election Day, up from 712,000 at the same time in 2016, according to Democratic analytics firm TargetSmart.

Speaking shortly after media called the state for Biden on November 13, the head of the Georgia Democrats was resolute.

“This proves what we’ve been saying all along … that we have the voters here to flip the state blue,” said Nikema Williams, chair of the Georgia Democratic Party, in comments to the LA Times. “It is a matter of making sure that we have the resources and candidates willing to work to get out the vote.”

FRANCE 24 spoke with Dr. Andra Gillespie, a professor of political science at Emory University in Atlanta, about how Georgia’s Black voters could affect the outcome of the upcoming Senate run-offs. Gillespie directs Emory’s James Weldon Johnson Institute for the Study of Race and Difference and authored the 2017 book, “The New Black Politician: Cory Booker, Newark and Post-Racial America”.

How important do you see the efforts of voting rights organizations, such as Black Votes Matter, the New Georgia Project and Fair Fight, in terms of registering new voters in Georgia and mobilizing them to get to the polls?

It’s important to point out that these organizations have actually been on the ground for a long period of time …. There’s a well-established political science literature that establishes that if you remind people to turn out to vote –particularly if you give them a personal reminder – the more likely it is that a person’s going to turn out.

You really do have to talk to voters to convey the significance of the vote and to provide important information, particularly for voters who are new. Groups like the New Georgia Project, Black Voters Matter or the Georgia Coalition for the People’s Agenda do engage in voter mobilization and outreach and education to help make sure that they’re targeting constituencies to maximize their turnout.

This fits into the larger story of how Georgia has changed in the last decade; it’s how we got to the point that Joe Biden could actually win the state. Almost a decade ago, people like Stacey Abrams recognized that Georgia demographics were changing, and that there were more voters who were likely to be Democrats who were moving to the state, but that they weren’t actually being registered to vote. So what Stacey Abrams did is start registering groups that were likely Democratic voters, even though her effort started off as a nonpartisan effort, and then make sure to help them become regular voters by mobilization, by outreach, by education, by reminding them.

In so doing, they’ve managed to change the face of the electorate. Georgia’s electorate is now less White than it used to be, and because people of color are more likely to vote Democratic – Asian-Americans and Hispanics break Democratic at almost a 2-to-1 margin and African-Americans break Democratic at about a 9-to-1 margin – these numbers have helped Democrats narrow the gap between themselves and Republicans in important statewide contests.

On November 3, you’ve got high turnout across the board. You see this large African-American population and then you’re going to add Asian-American and Hispanic voters, who make up 6 percent of the electorate [in Georgia] – but that’s actually twice what they were in 2012. So what you saw was what the multiracial coalition looks like, but you don’t get to 2020 without there having been some party-building that people like Stacey Abrams had done.

What obstacles do you see African-American voters and other voters of color facing in these run-off races?

We could expect some attrition in the Democratic pool and in the Republican pool. The types of people who maybe were compelled to show up for Donald Trump, some of them are low-propensity voters, who wouldn’t be your typical Republican run-off voter. Amongst Democrats, voters of color tend to be younger, and tend not to have the socioeconomic resources that [facilitate] regular voting behavior and so there are disadvantages there. Both groups are going to have their challenges getting their coalitions to turn out to vote.

There is, for all intents and purposes, unlimited money being spent in the state, so there are enough resources to remind voters of what’s going on. Democrats are going to have lots of incentive to try to get people to turn out: One, they want to prove that November 3 wasn’t a fluke, and then two, control of the Senate is up for grabs.

We have seen in the general election some responsiveness to making sure there were ample polling locations, in part because [during] the primary election cycle in June there were some places that historically have sort of a trend of having long lines. And then there were consolidations of [voting] districts because of Covid-19 and fewer poll workers.

I think the big question will be: Are all of the polling locations that were open for early voting in the general election cycle open during the run-off? In at least one county that I know of, they aren’t. Will that create confusion? Will that discourage people from voting?

What data about Black voters during the general election was most encouraging to you as a scholar of African-American politics, and what data most concerned you?

I don’t frame it in terms of what is encouraging or discouraging. While voter turnout increases [were] everywhere overall and certainly in terms of absolute numbers, I would have liked for African-American turnout as a percentage of the overall electorate to match the overall share of registered voters.

The other thing that has gotten a lot of attention nationally is the exit polls that President Trump increased his vote share among Black women and Black men – but in particular among Black men. That certainly warrants future study as something that I’m interested in as a research question. The gains that we saw for Trump among Black men were still relatively small, and the overwhelming majority of Black men still voted Democratic in this particular election, [but] those are still things we want to explain.