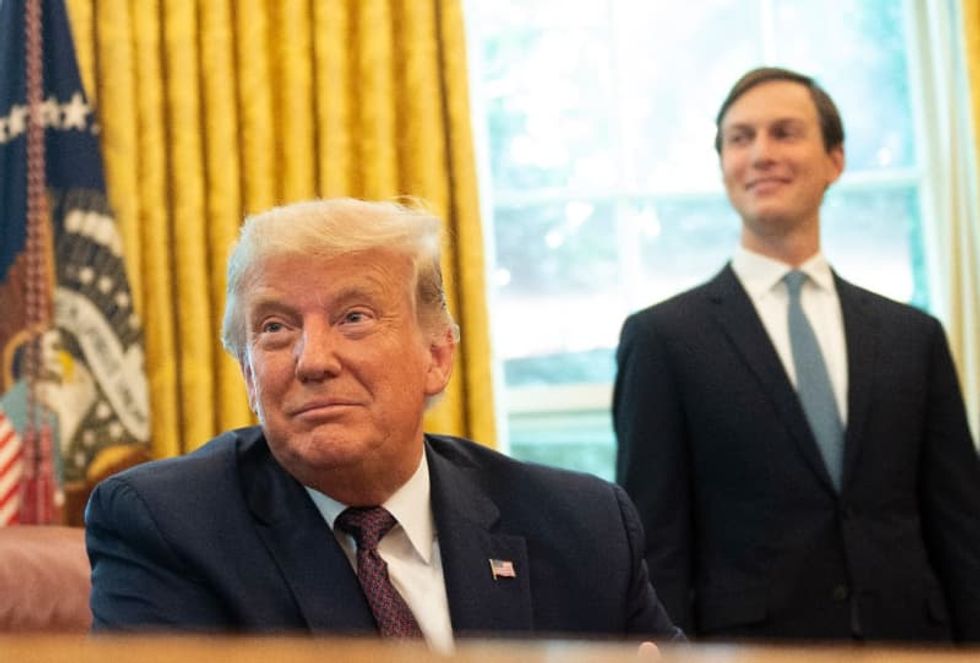 The United Arab Emirates is getting top-of-the-line fighter jets. Morocco is winning recognition for decades-old territorial claims. And Sudan is coming off the US terrorism blacklist.

The Arab nations are suddenly achieving long-sought goals after agreeing to normalize ties with Israel, in a last-minute triumph for the unorthodox diplomacy of outgoing President Donald Trump's son-in-law, Jared Kushner.

Widely mocked for more than three years as a boyish lightweight, who was best known for his famous wife, troubled property deals and his father's stint in prison, Kushner is scoring historic breakthroughs lauded by Trump's base with four Arab nations since September joining the so-called Abraham Accords with Israel.

"President Trump took a contrarian approach," Kushner told reporters Thursday as he announced the latest deal, with Morocco, saying that the Arab-Israeli conflict "has been held back for so long by old thinking and by stalled process."

"He had the authority; he was smart enough to develop personalized relations. I think he clearly deserves some credit for taking advantage of what the landscape showed was possible," said Dennis Ross, who served as Bill Clinton's Middle East envoy.

Kushner, a family friend of Israeli Prime Minister Benjamin Netanyahu, broke decades of US norms on Middle East peacemaking by barely making a pretense of being evenhanded with the Palestinians.

Trump recognized Jerusalem as Israel's capital and, in a long-delayed Middle East plan unveiled in January 2020, gave the US blessing if Netanyahu wanted to annex much of the West Bank.

Speaking to CNN at the time, Kushner warned the Palestinians, who were offered a limited state, not to "screw up another opportunity like they've screwed up every other opportunity that they've ever had in their existence."

Soft-spoken, thin and always sporting neatly coiffed hair and crisp suits, Kushner contrasts in style, if not goals, from his father-in-law.

Trump gave comedians fodder for jokes by putting Kushner in charge of everything from the Middle East to painkiller addiction, but in the Arab world, such familial arrangements showed he spoke for the president.

"In the Middle East, what negotiators or mediators need is unmistakable authority," Ross said.

Kushner, who turns 40 days before Trump leaves office, worked quietly and largely bypassed the State Department, whose top Middle East diplomat, asked at a late 2019 congressional hearing about his contribution to the Trump plan, replied, "Um, none."

Kushner traveled to Morocco for a Ramadan fast-breaking dinner with the king and swapped messages on WhatsApp with Saudi Arabia's powerful crown prince despite widespread concerns about his human rights record.

In Bahrain, another of the four Arab nations to move to recognize Israel, Kushner last year gathered Gulf executives for dinners and cocktails at a luxury hotel as they waxed about economic opportunities for the Palestinians, whose leadership boycotted the event.

Kushner had initially seen Gulf Arab promises of money as a way to pressure the Palestinians -- unsuccessfully -- to accept peace on Israel's terms.

But in mid-2020, UAE strongman Sheikh Mohamed bin Zayed Al-Nahyan -- described by former president Barack Obama in his new memoir as the Gulf's savviest leader -- reached out to turn the dynamic on its head.

Netanyahu would drop his plan for annexation. The UAE, in turn, would become the first Arab nation in more than 25 years to recognize Israel -- and win the right to buy stealth-capable US F-35s.

"It was an initiative that was really driven by the Emiratis but the administration, to its credit, was quick to pick up on it and has used that template these last several months," said David Makovsky, who studies Arab-Israeli relations at the Washington Institute for Near East Policy.

The new concept was "to put bilateral things that have traditionally had some importance to the United States and make those part of the deal."

Makovsky said there were key factors besides Trump and Kushner. Gulf Arabs feared US retrenchment as well as the growing influence of Iran and were aware of Israel's technological superiority.

Trump's unstated quid pro quos have raised alarm in some quarters, with Democrats opposing the F-35 sale and even some prominent Republicans upset over recognition of Morocco's claim to Western Sahara.

But Israel, which alone in the region had F-35s, did not object to the sale as it saw the dawn of a new era.

Makovsky believed that at least the Gulf Arabs' recognition of Israel stood on firm ground.

"If I could build on it," he said of Kushner's diplomacy, "I would hope that a new administration would do it with a twist and see if there is also something on the Palestinian issue."