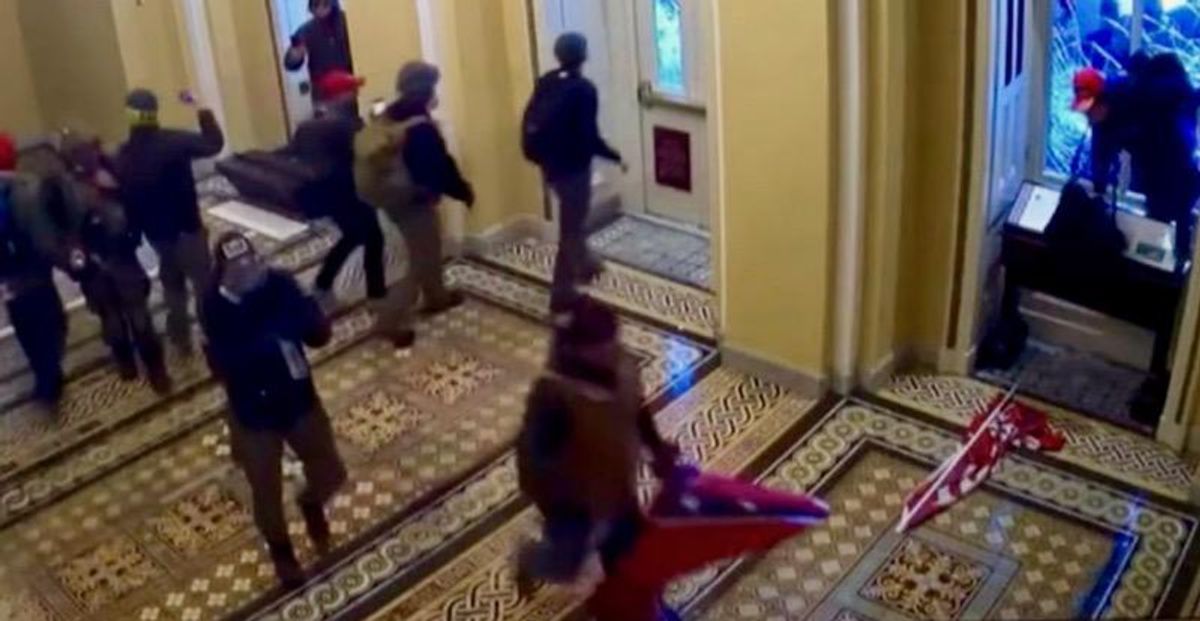 Insurrection on January 6th at US Capitol (Screen Grab)

The videos, never before seen security camera footage of the assault on the building and on hundreds of Capitol Police officers, show just how close the domestic terrorists came to coming in contact with the Vice President and the Speaker of the House – the second and third elected officials in line to the presidency – and Senate lawmakers.

But a few Republicans were also emotionally affected.

Senator Lisa Murkowski, Republican of Alaska, told CNN's Manu Raju, “I don't see how Donald Trump could be re-elected to the presidency" after the videos were shown in the Senate trial, if Senators don't vote to bar him from running for office. She also told him “that the evidence that was presented thus far is pretty damning."

Desiderio also says Oklahoma's GOP Senator James Lankford "was incredibly shaken up after that last video of Officer Hodges being crushed. I and other reporters in the chamber observed Lankford appearing to get teary-eyed. Sen. Daines (R-Mont.) was comforting him and was holding his arm."

Sen. Lankford afterward says of his reaction: “It's painful to see ... Who in God's name thinks, 'I'm going to show that I'm right by smashing into the Capitol'? Who would do that?" https://t.co/G5QRZrhF7R
— Andrew Desiderio (@AndrewDesiderio) February 10, 2021

And one unnamed GOP Senator confessed they hope all Americans watched today's videos.

Sen. Angus King tells @MSNBC a Republican senator, not one of the six who voted to advance the trial, said to him: "I hope everyone in the country is seeing this."
— Kyle Griffin (@kylegriffin1) February 10, 2021

But not all Republicans were affected.

“I've got nothing for you now," Senator John Cornyn told CNN's Raju, who says the Texas Republican is usually very "talkative."

Senator Ron Johnson of Wisconsin appeared to be in total denial of Trump's complicity.

GOP Sen. Ron Johnson would not say to me that Trump is accountable for what happened on Jan. 6, instead pointing to the rioters, saying: “I hold those people responsible." He added: “Those aren't the Trump supporters I know."
— Manu Raju (@mkraju) February 10, 2021

Senator Roy Blunt of Missouri, a Trump die-hard, was untouched.

Blunt: “I don't know what the other side will show from Seattle and Portland and other places, but you're going to see similar kinds of tragedies there as well."
— Manu Raju (@mkraju) February 10, 2021

Several GOP senators make clear they view the footage as chilling and are shaken by what they saw - but are singaling they won't change their plans to vote to acquit
“Same way that I was before," Sen. Mike Braun told me when asked if he was shaken. — Manu Raju (@mkraju) February 10, 2021

It's hard to convict, Braun added, “When you think the process is flawed in the first place."

The Senate voted 55-45 that the process was not flawed, that the Senate had jurisdiction to try the case. Senators are jurors, and swear an oath to deliver "impartial justice." As a juror, Braun does not get to decide whether or not the "process is flawed," because the Senate said it was not.

A law office has filed a lawsuit over the arrest last summer of a 73-year-old Colorado woman who suffers from dementia -- an arrest that Karen Garner's attorney said was "a nightmare," the Times-Call reports.

The lawsuit alleges excessive force was used by Loveland Police Department officers Austin Hopp, Daria Jalali and Sgt. Phil Metzler. Garner, who is 5 feet tall and 80 pounds, suffered a broken upper arm and dislocated shoulder during the arrest, along with other injuries.