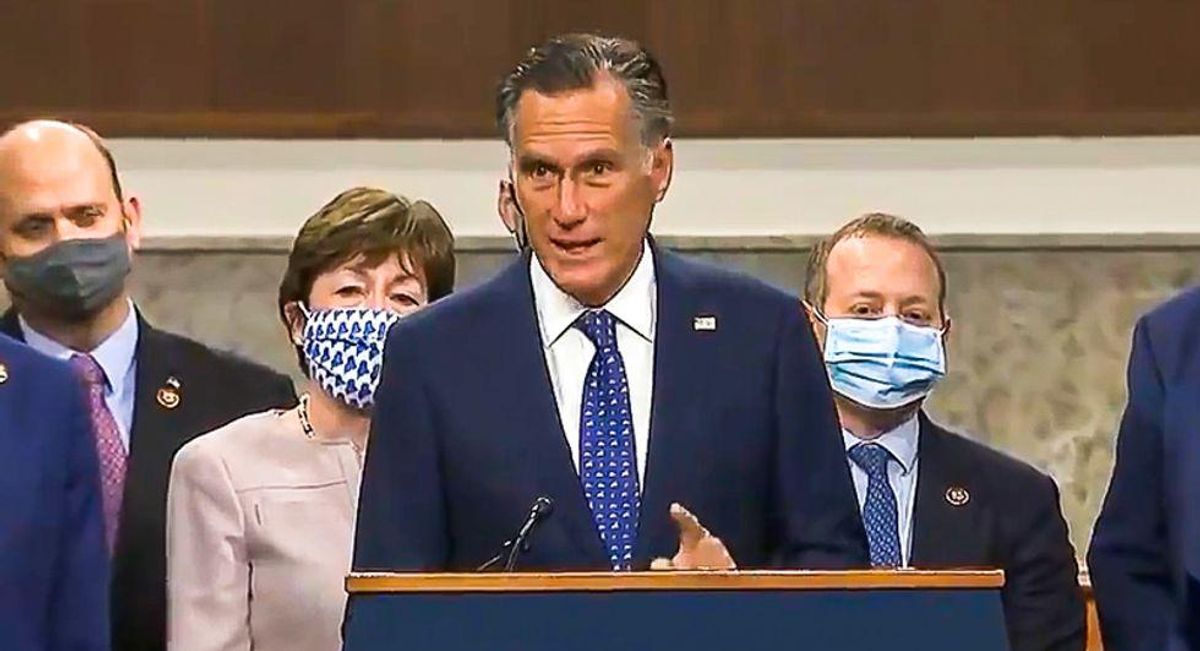 In a two-page memo (pdf) outlining its yet-to-be-finalized infrastructure plan, the bipartisan group lists "public-private partnerships, private activity bonds, and asset recycling" as potential ways to finance the package, which calls for $579 billion in new spending over five years.

Asset recycling refers to the practice of leasing out or selling off public infrastructure to private corporations and using the proceeds to fund other projects—a policy that Australia has used widely and that former U.S. President Donald Trump proposed replicating in 2017.

As the U.S. research nonprofit In the Public Interest noted in a 2017 report (pdf), "the Australian asset recycling program ultimately crashed and burned, and the fund itself was formally ended in December 2016."

"Our own country's experience shows that transferring control of public infrastructure to private interests is fraught with problems," the brief continued. "One such example is the privatization of Chicago's parking meters. In 2009, Chicago signed a 75-year public-private partnership with a consortium of companies for the operation of the city's 36,000 parking meters. Although the city received $1.15 billion in the deal, Chicago drivers will pay the consortium at least $11.6 billion to park at meters over the life of the contract. The contact required Chicago to raise parking meter fees by 200 to 800%, depending on the area of the city, from 2009 to 2013."

In a statement issued Thursday as the details of the bipartisan proposal began to emerge, Mary Grant of advocacy group Food & Water Watch warned that the plan "would pile further burdens on communities struggling to recover from the Covid pandemic."

"It promotes privatization and so-called 'public-private partnerships' instead of making public investments in publicly-owned infrastructure," Grant said. "This package does not provide adequate funding to rebuild and repair our country's infrastructure; it is nothing more than an outrageously expensive way to borrow funds, with the ultimate bill paid back by households and local businesses in the form of higher rates."

"Communities across the country have been ripped off by public-private schemes that enrich corporations and Wall Street investors," Grant continued. "This deal is a disaster in the making, and it must be rejected."

Rianna Eckel, an organizer with Food & Water Watch, similarly cautioned that the bipartisan proposal "would facilitate a Wall Street takeover of public services like water—which would lead to higher rates, worse service, and job cuts."

Led by Sens. Kyrsten Sinema (D-Ariz.) and Rob Portman (R-Ohio), the bipartisan group is crafting its infrastructure plan as an alternative to President Joe Biden's original American Jobs proposal, which calls for over $2 trillion in new spending over eight years financed partially by raising taxes on corporations and the wealthy.

"As chairman of the budget committee, I believe that now is the time to address the long-term crises facing working families."
—Sen. Bernie Sanders

Morris Pearl, chair of the Patriotic Millionaires, said Thursday that by deeming any changes to the 2017 GOP tax law off limits, the bipartisan Senate group is showing that it's "more interested in having less Infrastructure investment in order to justify keeping in place a rigged tax code that favors corporations and the rich rather than actually coming up with a plan that solves the enormous challenges that our country faces."

"If the choice is between a good deal and a bipartisan deal, Democratic senators must choose the good deal," said Pearl. "They must prioritize doing what the American people are asking for, which is to raise taxes on the rich and corporations. Two-thirds of voters support raising taxes on corporations to pay for President Biden's infrastructure investment."

As the bipartisan group continues to hash out the details of its proposal behind closed doors, Sen. Bernie Sanders (I-Vt.) and Senate Democrats are considering a package that includes up to $6 trillion in infrastructure and safety-net spending.

On top of major investments in physical infrastructure and green energy, the $6 trillion plan would lower the Medicare eligibility age from 65 to 60 and expand the healthcare program's benefits to cover vision, hearing, and dental. The proposed expansion would be paid for by allowing Medicare to negotiate prescription drug prices, which Sanders' office estimates would raise $450 billion in revenue over a decade.

"As chairman of the budget committee, I believe that now is the time to address the long-term crises facing working families," Sanders tweeted Thursday. "And, yes. We can pay for many of these proposals by demanding that the wealthy and large corporations start paying their fair share of taxes."