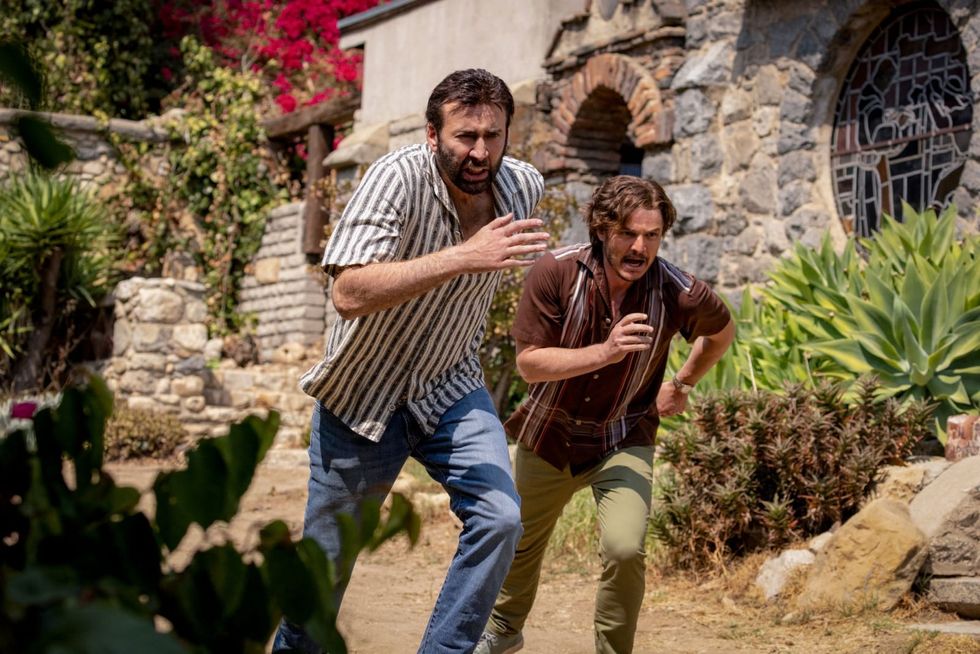 Los Angeles (tca/dpa) — In his more than 40 years of acting, Nicolas Cage has gone to plenty of strange and extreme places for the sake of his art.

In the 1988 black comedy "Vampire's Kiss," he ate a live cockroach. To prepare for his role as a suicidal alcoholic in the 1995 drama "Leaving Las Vegas," for which he won an Oscar, he had a friend videotape him binge-drinking for two weeks. The internet is filled with lists and compilation videos of "10 Top Nicolas Cage Freakouts," "The 25 Most Outrageous Nic Cage Moments" and "Nicolas Cage's 10 Craziest Roles Ever."

But no role has ever frightened Cage as much as the one he plays in his new film "The Unbearable Weight of Massive Talent": Nicolas Cage.

"It was hands-down the scariest thing I've ever done in this path I've been on," Cage, 58, told the LA Times over Zoom this week. "It was a high-wire act, and if I fell, the drop was disastrous."

In the gonzo, mind-bending action-comedy, which is now playing in theaters, Cage plays "Nick Cage," a washed-up, financially strapped star who accepts a $1 million offer to appear at the birthday party of a wealthy fan named Javi (Pedro Pascal). Once there, Cage and his ex-wife (Sharon Horgan) and teenage daughter (Lily Sheen) find themselves swept up in a covert CIA plan to infiltrate and take down Javi's arms-dealing empire, even as Cage and Javi find themselves becoming friends and screenwriting collaborators.

If that's not enough meta-weirdness for you, throughout the movie, Nick regularly converses with a younger, cockier version of himself, "Nicky," who goads him to recapture his former stardom. At one point in the film — which caps a string of well-received turns for Cage in recent films including "Pig" and "Mandy" — Nick and Nicky French kiss.

For Cage fans, the movie is a funhouse-mirror trip through his life and career in all its meme-generating glory. But for those less steeped in the actor's oeuvre, the meditation on all things Cage may require some explanation.

Here, Cage, the film's director, Tom Gormican, and co-writer Kevin Etten unpack some of the film's Cage-ian twists and turns. (Caution: spoilers ahead.)

Fueled by their own love for Cage, Gormican and Etten wrote the script for "Unbearable Weight" on spec, with no idea whether the actor would actually sign on to the film. "One of our friends said, 'As a purely business decision, this is one of the stupidest things I've ever seen,'" Gormican says. " 'It's a one-shot deal, and if he doesn't do it, it becomes a pile of garbage on your desk.'"

Cage initially turned the project down, worried that it would simply take cheap shots at him and his career ups and downs. "I was afraid that the director would want to push it into that kind of 'Saturday Night Live' mockery zone," he says. Ultimately, after Gormican wrote him a letter making clear that the script came from a place of deep admiration, Cage decided to take the plunge.

In creating the Nick Cage character, Gormican and Etten drew largely on the actor's public image rather than any personal knowledge of the man himself. "The idea of a guy having to become the action hero that he was in the late '90s and early 2000s in order to save his family really turned us on," Gormican says. "That was a sort of North Star, and we never wavered from that."

Certain aspects of the Cage character are drawn directly from the actor's life, while others are invented or tweaked. "There are a lot of things in this so-called Nick Cage that are not me," Cage says. "This was a much more absurdist, neurotic, anxiety-ridden version of so-called Nick Cage."

In the film, Cage is depicted as a narcissist who has at times distanced himself from his family in his pursuit of stardom. In real life, Cage, who has been married five times and has two grown sons, with a third child on the way, says he has always put his family before his career ambitions.

"I never had a career — only work," he says. "I've turned down some big movies because I couldn't travel because I was in a divorce situation and it's only so much custody. In the movie, they made him a little bit tone-deaf to his daughter's needs. But I always put family first."

When it came to satirizing his well-documented financial troubles, however, Cage — who has appeared in numerous low-budget films in recent years to help dig himself out of debt — had no real qualms.

"What I did was monumental: I worked my way out of $150 million in debt and I didn't file for bankruptcy because I was there for my family," he says. "You didn't see me do one of those silly Super Bowl commercials — and believe me, they offered. You got a problem with that? I don't. I'm proud. So with that kind of stuff, I was like, 'Yeah, let's talk about it.'"

Indeed, Gormican and Etten say that Cage has a deep awareness of how he's viewed by the general public, for better and sometimes for worse. "The first question anybody asks is, 'Does he get it?' And what they mean is, 'Does he understand what people think about him?'" Gormican says. "And he does."

To provide a kind of foil for the rather beaten-down Nick Cage, Gormican and Etten created a younger, more brazen version of the actor called Nicky. "It came out of a conversation Tom and I had about a voice in one's head that's going, 'What happened? Why is your career not in the place it should be?'" says Etten. "We felt like the most interesting way to dramatize that was to have the younger self."

Cage, who played dual roles as identical twin brothers in Spike Jonze and Charlie Kaufman's "Adaptation," was enamored of the idea of acting opposite his younger self. Instead of basing Nicky on "Con Air"-era Cage, as Gormican and Etten initially planned, Cage suggested basing his younger avatar on his off-the-rails 1990 appearance on the British talk show "Wogan," during which he somersaulted, karate-kicked, stripped off his leather jacket and shirt and threw money into the audience.

"That guy is irreverent, arrogant, obnoxious — I don't like that guy," Cage says. "I wanted that guy to be sort of one of the villains in the movie. I just think his attitude is so vulgar, it's hilarious."

Cage performed both characters in turn, acting opposite a double; then in postproduction Gormican and his visual effects team digitally matched the Nicky character to Cage's "Wogan" appearance. "The de-aging part of it was an algorithm that helps you smooth out any wrinkles and change the shape of the face," Gormican says. "It was a long process of trying to figure out how to accomplish that look."

Cage — who had the idea himself to have Nick and Nicky tongue-kiss — hopes that scenes like those remind people, including studio executives, of his unique comedy chops.

"I've been scratching my head a little bit as to why Hollywood wasn't offering me comedies anymore," he says. "I had done 'Raising Arizona' and 'Honeymoon in Vegas' and 'It Could Happen to You' and 'Moonstruck.' I was just sort of like, 'Where did that option go?' I think this movie will help with that."

Javi and the ultimate Cage superfan

In Pascal's Javi, Gormican and Etten wanted to create a character who could not only help drive the plot but also serve as a kind of stand-in for Cage superfans like themselves.

"When we hired Pedro, he had this conception of Javi that was more like the sort of macho character he's played before, like on 'Narcos' and as the Viper [in 'Game of Thrones']," Gormican says. "We thought the more surprising version would be a character that's closer to Pedro himself, who is actually a Nicolas Cage superfan. That sweeter, softer side of Pedro, where he's actually head over heels in love with Nicolas Cage, was more interesting."

Cage himself has never met anyone quite as devoted to him as Javi, who has constructed an entire shrine to the actor, complete with a life-size re-creation of his character from "Face/Off" alongside memorabilia from films such as "Moonstruck," "Con Air" and "Mandy." But he has certainly met his share of obsessive fans.

"There was one moment in time that I was being stalked by mimes," he says. "These two mimes kept stalking me and putting on their mime shows. That was a weird one. Then there was a time in Romania, of all places, near the Carpathian Mountains — you know what that means, the whole world of Transylvania and what have you. I was trying to get on a plane, and a woman kept following me and calling me 'my Nicolas,' and she would jump and try to bite me on the neck. That was a bit scary."

In constructing the film, Gormican and Etten tried to capture every mode of Cage's career, from the wild comedy of "Raising Arizona" to the testosterone-fueled action of "Con Air" to the pathos of his Secret Service agent role in "Guarding Tess."

The two worked in a few Easter eggs for die-hard Cage nerds, including a scene in which Cage falls into a pool with a drink in his hand that references "Leaving Las Vegas" and another in which he is stabbed in the leg, a la "Face/Off." But they tried to restrain themselves from veering too deeply into fan service. "We had to manage how much we would reference before people would go, 'All right, guys, this is annoying, please stop,'" Gormican says.

The two had faith that the actor himself would supply enough odd, unhinged line readings to satisfy those who prefer their Cage unfiltered and over-the-top. "He would call it 'full Cage,'" Gormican says. "The idiosyncrasies, those things that you love that you're not going to get from any other actor — you can't stop it. That's ultimately why we wrote the movie about him."

One of the most "full Cage" moments in the film comes when Nicky roars out the actor's name — "Niiick! F—! Caaaaage!" — stretching out the line to a truly Cage-ian degree that left the director in awe.

"I called cut, and he walked over and said, 'I wanted that to be transcendent,'" Gormican says. "I never would have thought of that. The only brain that that comes out [of] is Nicolas Cage's."

Former President Donald Trump is facing deep criticism for his latest remarks suggesting voter fraud might now be an issue in Pennsylvania.

On Wednesday, May 18, Trump took to Truth Social with a brief statement amid the reporting of midterm elections results in Pennsylvania, a state he has been fiercely focused on while endorsing MAGA-inspired candidates that align with his political interests.