California winemakers take wildfire-fighting into their own hands 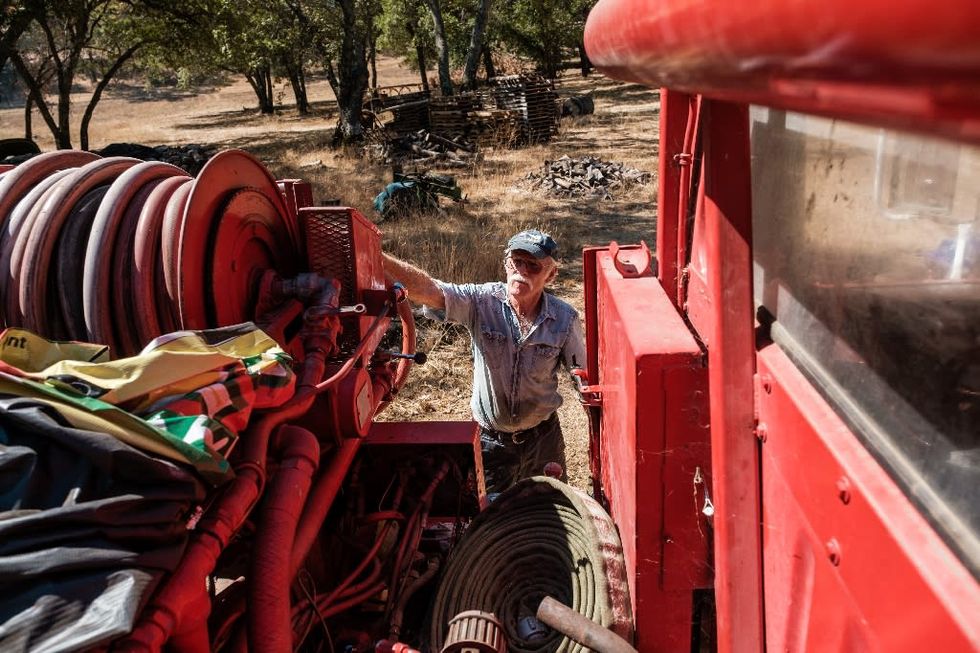 Napa (United States) (AFP) - Water tanks, fire trucks and helicopters: California's Napa Valley winemakers are buying their own equipment to protect their property and their pricey vintages from wildfires.

A historic drought driven by man-made global warming has left large tracts of the western United States parched and highly vulnerable to fires.

That includes the world-renowned vineyards that dot central California, producing billions of dollars in wine every year.

And with fires spreading at an alarming rate -- 2021 is shaping up to be the most destructive year on record -- firefighting resources are stretched thin.

"I know that CalFire cannot be everywhere at the same time and that has shown constantly, not only here but in the rest of California," said Randy Dunn, who founded his 200-acre (80-hectare) winery in 1979, referring to the state's firefighters.

"So I feel strongly that, if you have some protection and you stay here, that you got a chance. If you leave, then I think your chance has really dwindled."

Dunn already owned a vintage 1946 fire truck -- old, but still functional -- and has just bought a newer one.

The siren doesn't work, but its hoses are fine, though so far they have not been battle tested -- it's more of something he has been using for fun with his grandchildren.

But he is confident he would be able to use it if a fire breaks out on his property.

Its purchase was prompted by a close call last year when the Glass Fire scorched more than 67,000 acres of Napa and Sonoma counties -- prime wine-producing country.

"It was about a mile from here," he told AFP pointing to the west, where dried-out pines cling to the dusty earth.

Wildfires are a part of the natural forest cycle, burning away old vegetation and spurring new growth in their wake.

But their reach, intensity and regularity is increasing across the region, as the planet warms and weather patterns change.

Each fire season brings new worries over how much will burn this year, and how far the wind will carry the embers.

Winemakers like Dunn know that they have to work hard to protect their land.

He has spent thousands of dollars to clear brush and forest around the property.

But the cost pales in comparison with the insurance premium, which has gone up more than five-fold this year to $550,000.

For Mike Dunn, Randy's son, the land management is vital to the fight to protect the vineyards.

"If you have defensible space like we do, it certainly doesn't hurt to have some sort of method to spray any possible (fire) startup.

"If something came shooting over here, we can put it out."

The Dunn estate produces tens of thousands of bottles of wine each year, matured in casks from Burgundy, France in an on-site cellar.

Last year's smoke-infused vintage had to be turned into box wine, and fetched the equivalent of just $6 a bottle.

"The two evacuations last year and the proximity of the fire and the resulting ruined vintage... it's just terrifying," says Mike Dunn.

"It's a way of life that's being threatened."

With fires raging across California, the Dunns are not alone in fretting if the fire service will have the resources to protect them -- even with the recent addition of a dedicated helicopter and high-tech fire-detection cameras.

Neighbor Michael Rogerson, a relative newcomer to the area and chief executive of an aircraft company, is offering another private-sector solution to worried vintners.

He has two retro-fitted ex-military helicopters that he wants to provide as dedicated fire-fighting machines.

"Right now, we're finishing equipping the helicopters and we expect that they would be out in this region in about two weeks," he said.

"We would hope to be able to demonstrate it and show it to CalFire and the US Forestry Service and also to the Napa community, that this is a great solution for them."

With just a few weeks to go until the grape harvest, Randy Dunn is hoping that such solutions will not be needed, and that he won't have to press his engines into action -- at least not for fighting fires.

"We've used the old one for great squirt gun fights with the kids," he says.

"They get their high powered squirt guns, I get my hose."