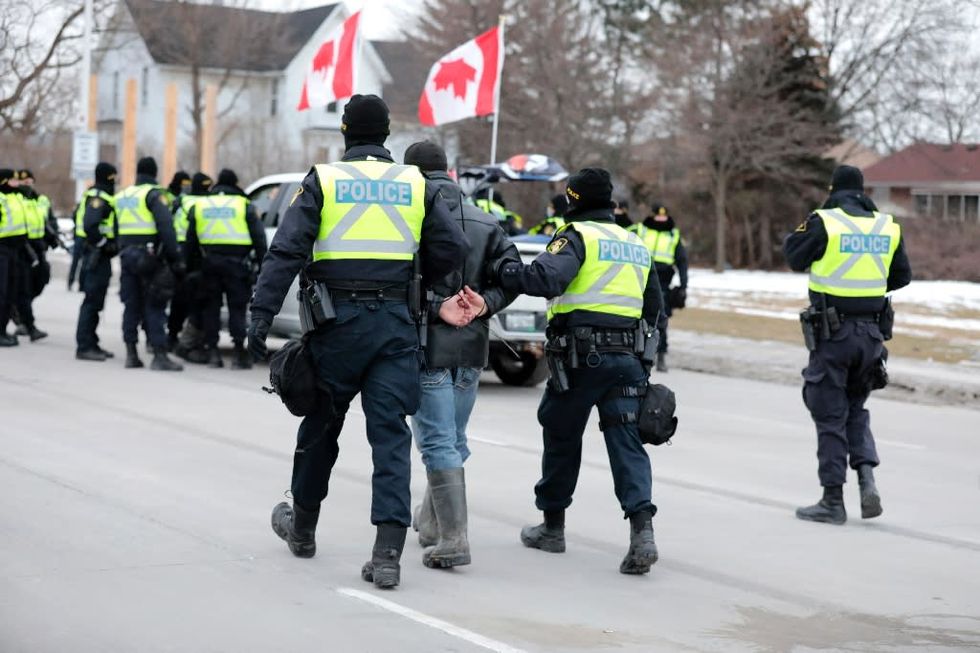 Canadian police detain a protestor as they clear demonstrators against Covid-19 vaccine mandates who blocked the entrance to the Ambassador Bridge in Windsor, Ontario

Windsor (Canada) (AFP) - A Canadian mayor Sunday declared the standoff on a key US border bridge over after police moved in and arrested protesters, but the trucker-led movement against Covid-19 restrictions remained defiantly mobilized in the capital Ottawa and elsewhere.

A heavy contingent of officers backed by armored vehicles made their way to the demonstration near Windsor, Ontario, to clear the Ambassador Bridge, a major border crossing to the US city of Detroit, Michigan.

Authorities began their operation Saturday but several demonstrators had remained, extending the protracted standoff and preventing traffic from flowing.

The road to the bridge was cleared, but cross-border traffic had yet to be restored by midday.

"Today, our national economic crisis at the Ambassador Bridge came to an end," Windsor Mayor Drew Dilkens said in a statement, referring to the heavy toll on trade and other business by a blockade that had been in place since Monday.

"Border crossings will reopen when it is safe to do so and I defer to police and border agencies to make that determination," the mayor added.

The demonstrations have inspired copycat protests around the globe, including in France, the Netherlands, Switzerland and Australia, and with some US truckers discussing a protest for March.

In Ontario, where authorities have declared a state of emergency, the provincial supreme court had ordered truckers late in the week to end their blockade of the Ambassador Bridge.

The protest has forced major automakers in both countries to halt or scale back production.

Canada's Prime Minister Justin Trudeau, who blasted the blockades as "illegal," promised that "this conflict must end," but he has faced mounting criticism for failing to act more decisively.

Initially, no arrests were made at the bridge; but drivers were warned that they potentially faced major fines, jail time and loss of their driver's licenses if they continued blocking traffic.

"I strongly urge all provincial and federal leaders to refrain from any divisive political rhetoric and redouble efforts to help all Canadians heal, as we emerge from almost two years of pandemic lockdowns and restrictions," he said.

The Ambassador Bridge is vital to the US and Canadian auto industries, carrying more than 25 percent of merchandise exported by both countries.

Truckers originally converged on Ottawa to press their demand for an end to a vaccination requirement affecting truckers crossing the international border.

But the movement has spread, as the protesters now seek an end to all vaccine mandates, whether imposed by the federal or provincial governments.

Ottawa has been the epicenter of protests. Police on Saturday estimated that some 4,000 demonstrators were still occupying the center city, in the third weekend of the movement.

The atmosphere among protesters has been festive, with music, dancing and constant sounding of air horns -- but the noise, obstruction and sometimes rude and aggressive behavior of demonstrators has harmed area businesses and infuriated many locals.

The truckers' message, however, has resonated more widely than authorities expected.

One opinion survey found that a third of Canadians support the protest movement.

The truckers have also found support among conservatives and vaccine mandate opponents in other countries, even as Covid measures are being rolled back in many places.

In Paris on Saturday, police fired tear gas and arrested nearly 100 people in an effort to break up convoys of vehicles coming from across France.

By Sunday hundreds of them drove their self-proclaimed "freedom convoy" of cars and trucks northward to Lille, en route to Brussels, where Belgian officials have already banned a demonstration called for Monday.

A vehicle convoy in the Netherlands brought The Hague's city center to a standstill in another Canada-style protest.

In Switzerland, hundreds of protesters marched in Zurich to protest Covid-19 restrictions, while several thousand others rallied against them, Swiss media reported. Police used tear gas, water cannons and rubber bullets to disperse the crowds.

An estimated 10,000 Australian protesters marched through the capital Canberra to decry vaccine mandates.