Why conservative parts of the US are so angry

Decades of political decisions and policies have created a massive and growing chasm between the economic and social disaster unfolding in small-town and rural parts of the United States, and the prosperity and safety of cities and suburbs. Many of those successful urban and suburban areas have reaped the rewards of electing largely moderate, competent Democratic leaders. Meanwhile, rural areas have elected Republicans drawn from a party that is increasingly incompetent, corrupt, and willing to engage in outright racism to win elections.

This disparity may affirm progressive ideas about successful and inclusive governance, but it also holds grave implications for the country as a whole.

Anger is roiling in Republican America, along with conspiratorial fabrications about who to blame for their condition. A harbinger of this trend is Antlers, Oklahoma, where I grew up: a once-thriving town in the southeastern part of the state, bordering the lush Ouachita foothills of dense forests, abundant agriculture, and lucrative tourism resources. The town rebuilt after a devastating 1945 tornado, but it has not weathered 21st century politics.

Racially and politically, Antlers is typical of much of rural Oklahoma, a state forged from the 19th century territory set aside for Native American tribes forcibly removed from other parts of the United States. Antlers is now 75% White and 22% Native American or mixed race, but with very few Latino, Asian, or Black residents. In 2020, Antlers and its county, Pushmataha—which supported former President Bill Clinton in 1996 and even Jimmy Carter over Ronald Reagan in 1980—voted in 2020 for Republicans, 85% to the Democrats’ 14%, up from an 80% share for Republicans in 2016, 54% in 2000, and 34% in 1996.

Antlers’ social statistics are beyond alarming. Nearly one-third of its residents live in poverty. The median household income, $25,223, is less than half Oklahoma’s $55,557, which in turn is well below the national median of $74,099 in January 2022.

In a growing nationwide trend, the median household incomes of people of color, according to the U.S. Census Bureau, now exceed those of White people in nearly 200 of the 1,500 Republican-trifecta counties—those in which the party controls the governor’s office and both legislative chambers of state government (see Figure 1). This is a visible factor that has fueled Trump voters’ complaints alleging White people’s diminished status. 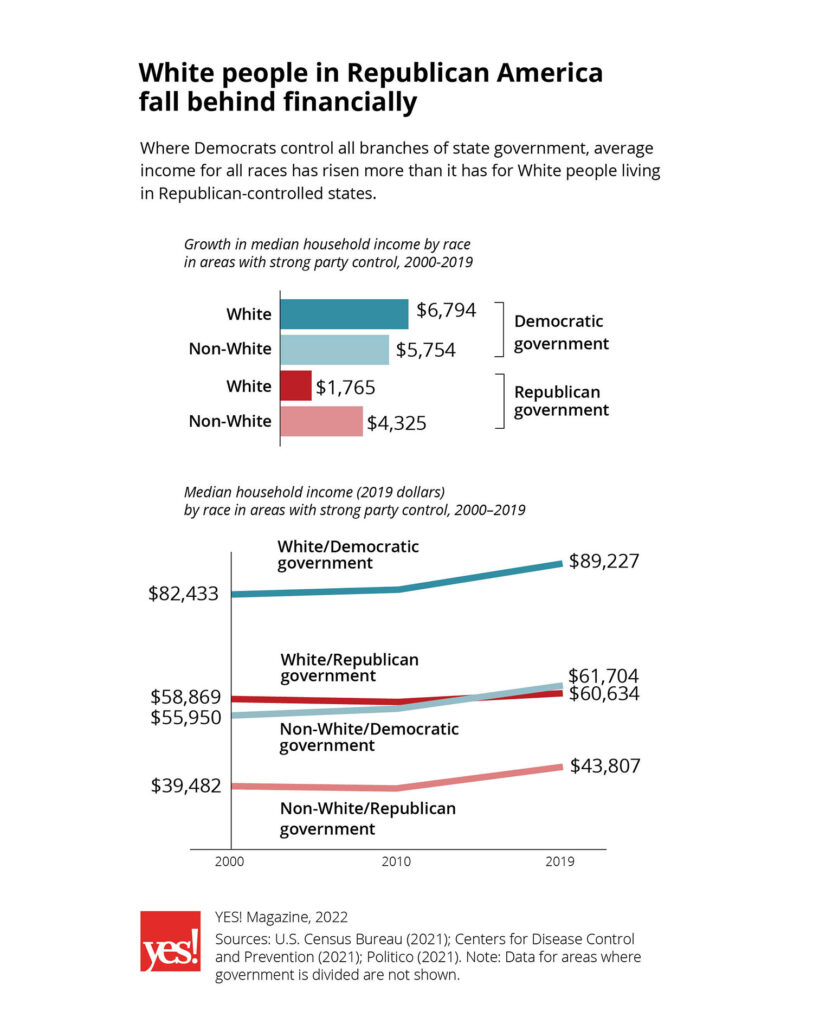 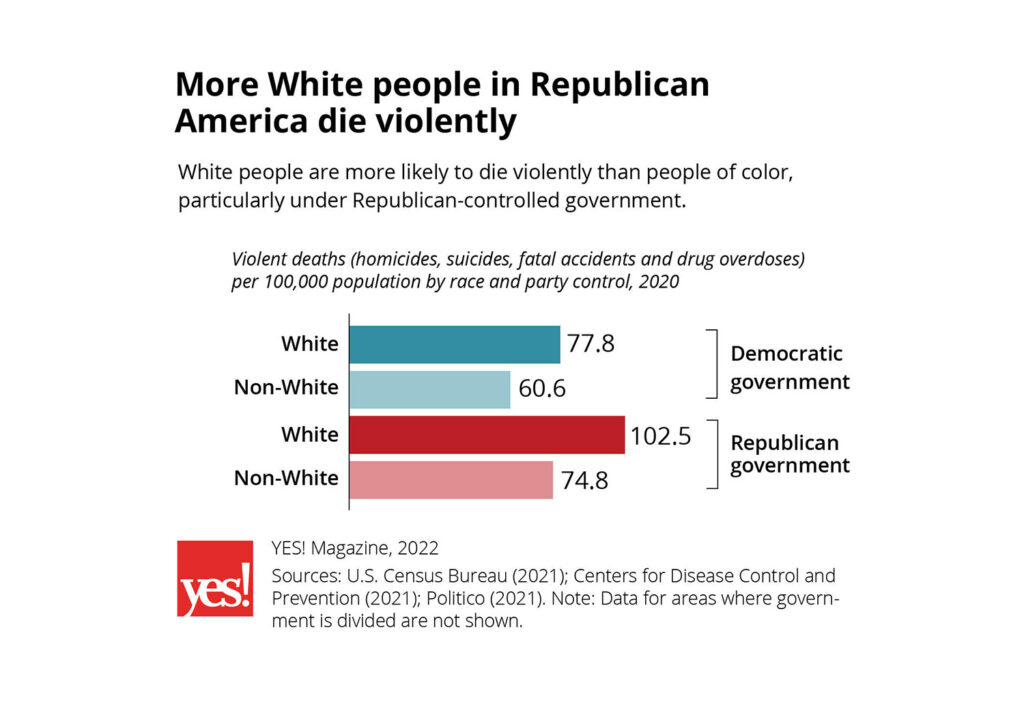 The numbers on paper look bad enough. Seeing them on the ground is a new kind of scary. When I was growing up in Antlers 60 years ago and visited it 20 years ago, my family’s old block consisted of well-kept middle-class homes fronting yards for chickens and horses. On my latest visit in January 2022, I found the houses all boarded up or blowing open in the wind (see photo at top). There are hundreds of abandoned dwellings with collapsing roofs and walls and junk-filled empty lots alongside barely intact, yet still occupied, houses.

Antlers is not all devastation, however. It sports a gleaming Choctaw-built travel center financed by casino revenues, which are also invested in local Native Americans’ well-being. And there are some thriving neighborhoods, including a ritzy mansion suburb uphill from town. Antlers’ 2,300 residents can avail three liquor stores and seven new marijuana dispensaries.

A Widening Social and Economic Chasm

Across America, the partisan gap in gross domestic product per capita is also huge and growing: $77,900 in Democratic-voting areas, compared with $46,600 in Republican-voting areas. Antlers and Pushmataha County are hardly alone: 444 Republican counties have a GDP per capita of under $30,000, and 10 times as many people live in those counties than in the seven similarly low-GDP Democratic counties. Whites in about 40% of all Republican counties lost income over the past two decades. And Trump’s administration was no help to his base. During his presidency, the overall Democrat–Republican GDP per capita gap widened by another $1,800.

This is not simply an urban–rural divide. For the largest urbanized states, the three with Democratic control of all branches of government (California, New York, and Illinois) had GDPs per capita vastly higher than the three biggest Republican-controlled states (Texas, Florida, and Ohio).

The right-wing canard that hardworking White people subsidize welfare-grubbing cities is backward. Democrat-voting counties, with 60% of America’s population, generate 67% of the nation’s personal income, 70% of the nation’s GDP, 71% of federal taxes, 73% of charitable contributions, and 75% of state and local taxes.

Surveys and studies consistently find Trump’s generally older, White supporters enraged at “loss of status” and in fear of being “replaced” by non-White people. That White people are falling behind across key economic, health, and safety indexes is not due to victimization by immigrants and liberal conspiracies, however, but to victimization by other Whites and self-inflicted alcoholism, drug overdose, and suicide.

Is the solution to undividing America massive federal programs to improve Republican America’s struggling economies and troubled social conditions, then? Aside from the problem that Republican members of congress (and two recalcitrant Democrats) have sabotaged beneficial initiatives, former President Barack Obama already tried that. From 2010 to 2016, the Obama administration’s economic recovery measures fostered millions of new jobs and thousands of dollars in real median income growth for Whites in urban and most rural areas alike, reversing the recession under Republican George W. Bush’s presidency.

Yet, despite these gains, White voters vehemently rejected Democrats in successive elections. Today, Trump’s base voters are electing candidates who share their racial resentment and imagined victimization, not those who actually are advancing their safety and economic well-being.

Despite the superficial resemblance of the crumbling neighborhoods, junk-filled lots, and widespread poverty of Antlers and conditions in a devastated city of color like Camden, New Jersey, the origins of their devastations are very different. Camden is the product of systemic racism and industrial abandonment inflicted on poor, primarily non-White residents powerless to prevent their exploitation. Antlers is the predictable endgame of White majorities who had better options instead empowering incompetent, corrupt demagogues (segregationist Democrats in the past; nihilist Republicans today) who flatter White claims to racial and religious privilege while awarding largesse to rapacious outsiders.

Poverty in cities and on reservations requires mainly the sustained political will to work with populations who welcome the effort. In stark contrast, fixing rural White poverty against the angry, anti-democratic recalcitrance of most Whites themselves requires an entirely new political thinking we have yet to imagine.

Mike Males is a senior researcher for the Center on Juvenile and Criminal Justice, the principal investigator for YouthFacts, and the author of five books on American youth.