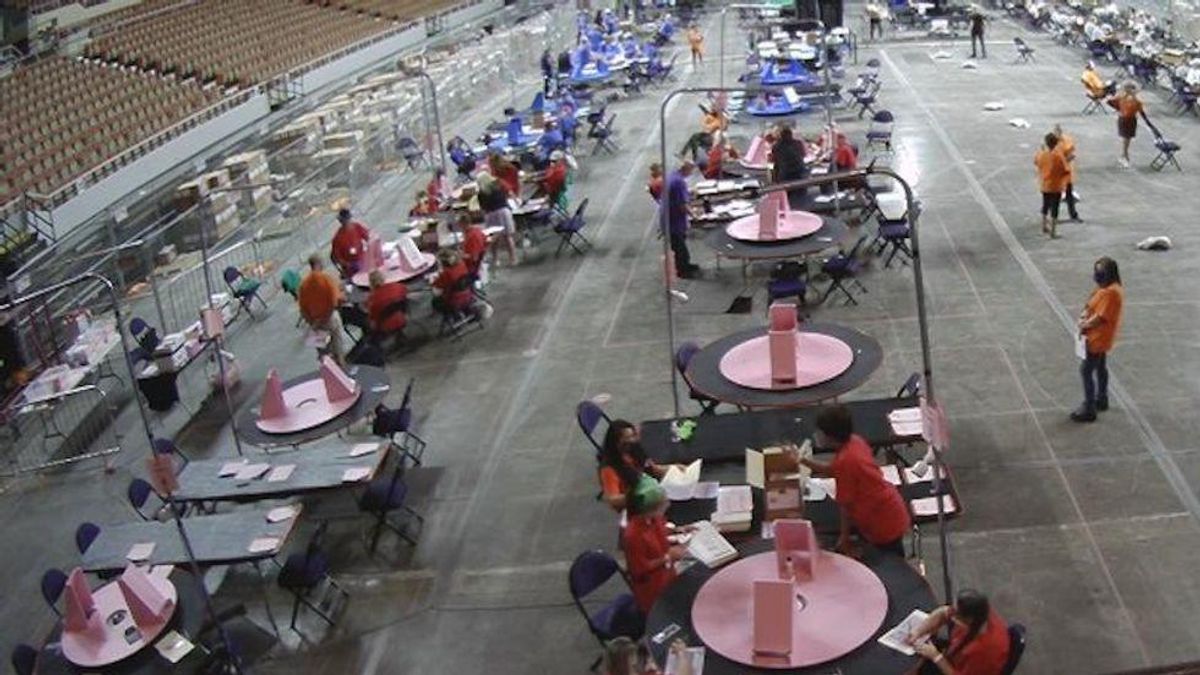 Elections experts watching the Arizona Senate's self-styled audit say Americans should take a deeply skeptical view of the conclusions reached by people they deemed inexperienced contractors using defective procedures for the purpose of intentionally undermining the results of the presidential election and continuing an ongoing fundraising effort.

This article was originally published at the Arizona Mirror

The team conducting the so-called audit ordered by Senate President Karen Fann will submit its draft report on Monday. The Senate will have an opportunity to review the findings and recommend changes before the final report or any of its findings are released to the public.

Various critics of the election review, however, aren't waiting for the Senate to release the findings to warn people to approach the findings with caution.

In a conference call hosted by the Washington, D.C.-based Center for Election Innovation and Research on Monday, a group of election experts and officials recounted a litany of problems they allege have plagued the audit, from substandard and constantly changing procedures to the motivations of the audit team and the people who are funding them.

David Becker, the center's executive director, called Cyber Ninjas, the Florida cybersecurity company that Fann hired to lead the review team, and its CEO, Doug Logan, inexperienced and biased. Logan and his company had no elections-related experience, and Fann hired him despite his public assertions that the election was rigged against former President Donald Trump.

“We're seeing the losing candidate in the presidential race and this ecosystem of grifters that have surrounded him continue to lie to supporters who are sincerely disappointed in the outcome, probably in an effort at grift," Becker said.

Becker described the “audit" as an effort to raise money — including by extending similar reviews into other swing states won by President Joe Biden, such as Michigan, Pennsylvania and Wisconsin — and to undermine public confidence in the election, which Trump and many of his allies have falsely claimed was rigged.

“This has been a half-baked effort by a firm that's completely unequipped to have anything to do with election work. And the result of this effort was fully baked from the beginning. The Ninjas are likely going to intentionally cast doubt on the outcome, even though it's been verified and confirmed more than any election in Arizona history," Becker said.

Benjamin Ginsberg, a prominent Republican election attorney, noted that the “audit" was almost entirely funded by outside groups that have promoted conspiracy theories about the election. Anyone examining the review's findings should keep in mind that those funders, who provided almost $5.7 million — dwarfing the $150,000 the Senate paid — are the real audience for the report, not the public, Ginsberg said.

“The outside funding sources is really important to concentrate on in terms of talking about the legitimacy of the 'audit' results," he said.

Various experts said it would be inaccurate to call the election review an audit in the first place, based on what they said were a lack of professional standards and practices.

Ray Valenzuela, Maricopa County's director of election services and early voting, and Jennifer Morrell, a former elections official and partner at Elections Group who has served as an observer at the audit for Secretary of State Katie Hobbs, described the election review's policies and procedures, which Cyber Ninjas only released after being sued, as highly problematic and likely to result in inaccurate recounts counts. The “audit" team chased wild conspiracy theories about ballots with bamboo traces and secret watermarks, and ignored best practices requiring bipartisan review teams for recounts.

Others alleged that the “audit" team has failed to follow proper chain-of-custody procedures, to the point that a court would likely reject the county's ballots and other election materials as evidence were an issue to arise in court.

“This is an unofficial election review, a partisan review, whatever term you want to use. But it's not an audit," Morrell said. “Election audits are defined in statute. Those processes and policies and procedures are described, they're documented, they're conducted by election officials using best practices."

But the Senate's “audit" spokesman Randy Pullen brushed off the criticism of the election experts, saying only, “They must be worried."

The audit team has already provided the Senate with a separate draft report on the results of a machine count it conducted to double check the total number of ballots cast in the election. The team acquired machines to count the ballots after the initial hand count of votes from the presidential and U.S. Senate races came up with a different number than the nearly 2.1 million ballots county election officials counted from the November election.

Benny White, a Republican election data analyst who was the GOP nominee for Pima County recorder last year, said he and the founder of the Boston-based election services company Clear Ballot Group made several offers to Fann to assist with the recount, but she refused.

Former Secretary of State Ken Bennett, whom Fann appointed as a liaison for the election review, was banned from the “audit" premises at the state fairgrounds for providing White and his colleagues with information about the counts from 20 boxes of ballots. White said his company's analysis found small deviations in four of the boxes and one with a more sizable miscount of 18 ballots.

White also questioned whether the results of the machine count would be accurate, saying the machines are designed to count new pieces of paper that slide easily over each other, not ballots that have been folded and handled repeatedly. And Maricopa County Recorder Stephen Richer noted that, rather than have a third party check the work, the machine count was conducted by the Cyber Ninjas.

“We'll go through any report that they put out, line by line by line, and point out where they're wrong, because they're going to claim that their results are different from the official results. And we're going to say, well, that's because you're wrong. You went about it incorrectly. You produced incorrect results," White said.

Pullen has said the election review team may also release an addendum to its final report at some point in the future if the Senate succeeds in forcing the county to turn over the routers used by its elections department. The county has refused to provide the routers, which the “auditors" say are needed to determine whether ballot tabulation machines were connected to the internet. The attorney general, and possibly the Arizona Supreme Court, will decide whether the county must comply with the subpoena.

But the election experts said the routers are completely unnecessary, given that the “audit" has already examined the machines, which he said contain all the information needed to determine if the machines sent or received online information. An audit conducted earlier this year by two federally accredited labs, and paid for by Maricopa County, concluded that the machines were never connected to the internet.

Matt Masterson, a fellow at the Stanford Internet Observatory and a former election expert for the federal government's Cybersecurity and Infrastructure Security Agency, compared the demand for the routers to an old dodgeball trick of throwing a ball in the air to distract an opponent so you can throw another ball at his face. He said it is a “classic disinfo technique" intended to cast doubt on the election results.

“This is a farcical attempt to again move the goalposts, throw the ball in the air so you can get pegged in the face with other claims, and play Whac-A-Mole," Masterson said.

Hobbs and Richer took aim at the pending “audit" report in their own preemptive rebuttals.

Hobbs, a Democrat who is running for governor, highlighted several previous audits and examinations from both before and after the election that showed accurate counts and no problems with the election equipment. Her report also noted many of the problems that Morrell and other election experts saw while working as observers for the Secretary of State's Office.

“It is clear that any 'outcomes' or 'conclusions' that are reported from the Senate's review, by the Cyber Ninjas or any of their subcontractors or partners, are unreliable," Hobbs' report concluded.

Richer, who defeated a Democratic incumbent in the November election, released an open letter to his fellow Republicans on Thursday urging them to reject spurious voter fraud claims and accept that Trump lost the election.