The primates, to which humans belong, were once thought to be close relatives of bats because of some similarities in our skeletons and brains. However, DNA data now places us in a group that includes rodents (rats and mice) and rabbits. Astonishingly, bats turn out to be more closely related to cows, horses and even rhinoceroses than they are to us.

Scientists in Darwin’s time and through most of the 20th century could only work out the branches of the evolutionary tree of life by looking at the structure and appearance of animals and plants. Life forms were grouped according to similarities thought to have evolved together.

About three decades ago, scientists started using DNA data to build “molecular trees”. Many of the first trees based on DNA data were at odds with the classical ones. Sloths and anteaters, armadillos, pangolins (scaly anteaters) and aardvarks were once thought to belong together in a group called edentates (“no teeth”), since they share aspects of their anatomy. Molecular trees showed that these traits evolved independently in different branches of the mammal tree. It turns out that aardvarks are more closely related to elephants while pangolins are more closely related to cats and dogs. 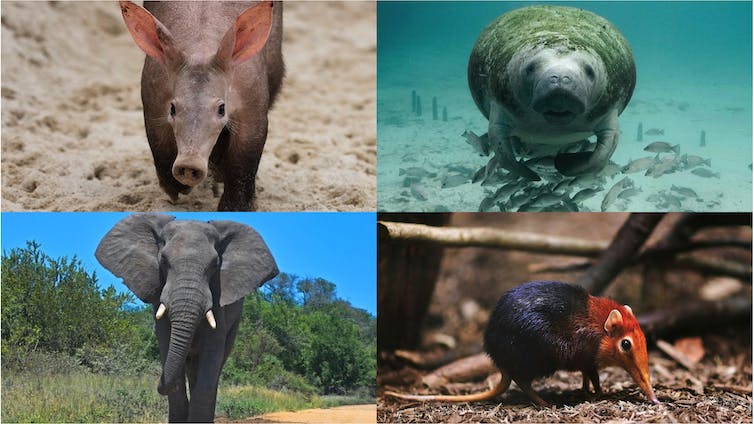 Molecular phylogenies show that mammals as different in appearance as aardvarks, manatees, elephant shrews and elephants are really close cousins.

There is another important line of evidence that was familiar to Darwin and his contemporaries. Darwin noted that animals and plants that appeared to share the closest common ancestry were often found close together geographically. The location of species is another strong indicator they are related: species that live near each other are more likely to share a family tree.

For the first time, our recent paper cross-referenced location, DNA data and appearance for a range of animals and plants. We looked at evolutionary trees based on appearance or on molecules for 48 groups of animals and plants, including bats, dogs, monkeys, lizards and pine trees. Evolutionary trees based on DNA data were two-thirds more likely to match with the location of the species compared with traditional evolution maps. In other words, previous trees showed several species were related based on appearance. Our research showed they were far less likely to live near each other compared to species linked by DNA data.

It may appear that evolution endlessly invents new solutions, almost without limits. But it has fewer tricks up its sleeve than you might think. Animals can look amazingly alike because they have evolved to do a similar job or live in a similar way. Birds, bats and the extinct pterosaurs have, or had, bony wings for flying, but their ancestors all had front legs for walking on the ground instead. 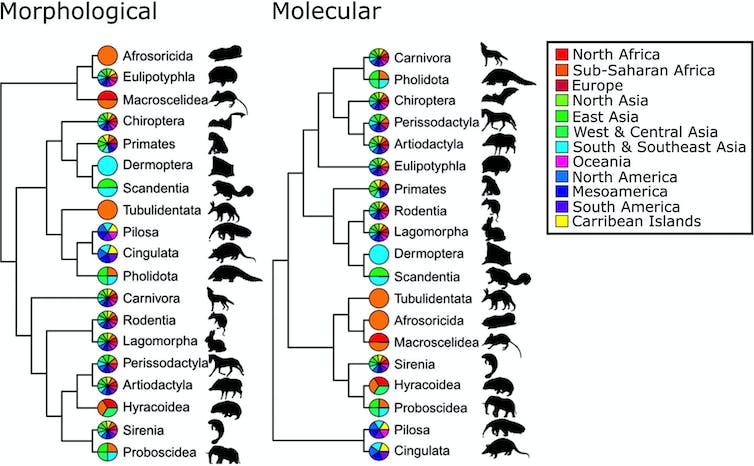 The color wheels and key indicate where members of each order are found geographically. The molecular tree has these colors grouped together better than the morphological tree, indicating closer agreement of the molecules to biogeography. Figure is from Oyston et al. (2022)

Similar wing shapes and muscles evolved in different groups because the physics of generating thrust and lift in air are always the same. It is much the same with eyes, which may have evolved 40 times in animals, and with only a few basic “designs”.

Our eyes are similar to squid’s eyes, with a crystalline lens, iris, retina and visual pigments. Squid are more closely related to snails, slugs and clams than us. But many of their mollusc relatives have only the simplest of eyes. 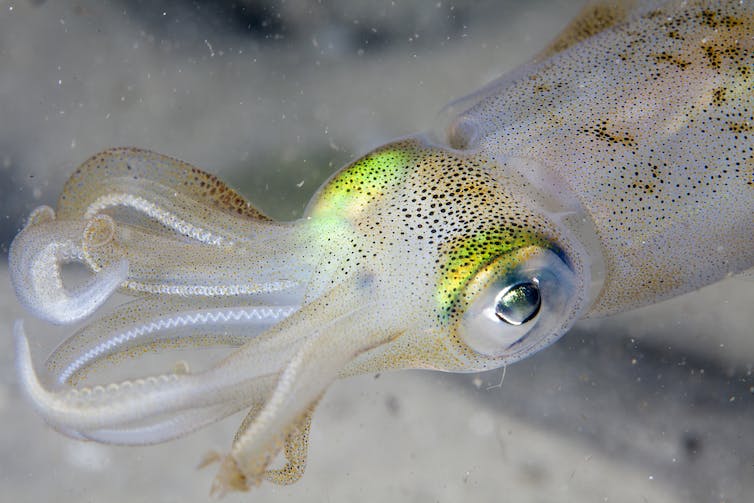 Squid and fish are actually separated by more than half a billion years of evolution.

Until the advent of cheap and efficient gene sequencing technology in the 21st century, appearance was usually all evolutionary biologists had to go on.

While Darwin (1859) showed that all life on Earth is related in a single evolutionary tree, he did little to map out its branches. The anatomist Ernst Haeckel (1834-1919) was one of the first people to draw evolutionary trees that tried to show how major groups of life forms are related. 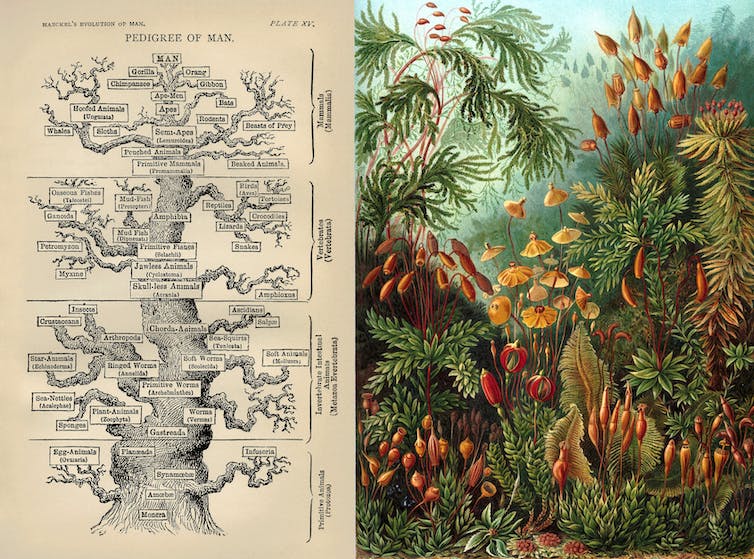 Haeckel’s drawings made brilliant observations of living things that influenced art and design in the 19th and 20th centuries. His family trees were based almost entirely on how those organisms looked and developed as embryos. Many of his ideas about evolutionary relationships were held until recently. As it becomes easier and cheaper to obtain and analyze large volumes of molecular data, there will be many more surprises in store.

Matthew Wills, Professor of Evolutionary Palaeobiology at the Milner Centre for Evolution, University of Bath