'Fire this guy': DeJoy gives himself an 'A,' asks for money to further slow mail 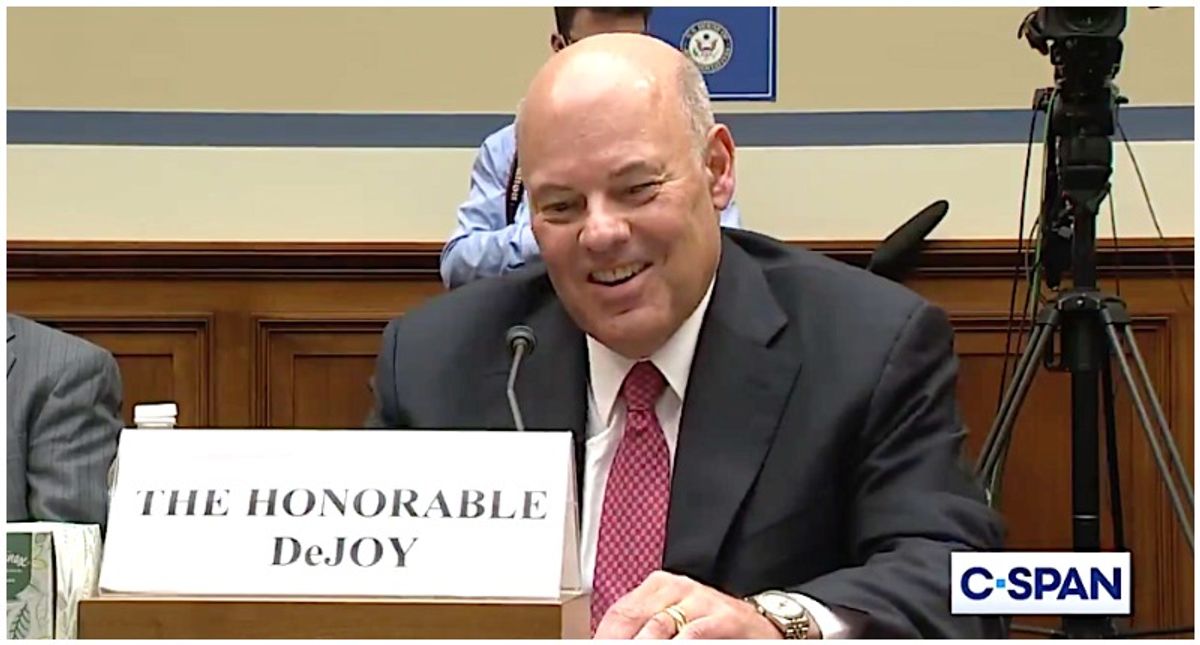 Handing congressional Democrats additional reasons to demand his removal, Postmaster General Louis DeJoy on Thursday asked House appropriators for more money to implement his forthcoming plan to further slow mail delivery and gave himself an "A" grade for his performance thus far at the U.S. Postal Service—a nearly nine-month tenure that has been marked by scandal and nationwide package delays.

"I would give myself an 'A' for bringing strategy and planning and effort to here," DeJoy said when pressed by Rep. Mark Pocan (D-Wis.) to assign a letter grade to his job performance as the postmaster general continues to resist calls to resign over the sharp and persistent mail slowdowns that followed his rollout of major operational changes last year.

Pocan, chair emeritus of the Congressional Progressive Caucus, made clear that he disagreed with DeJoy's self-assessment, pointing to an October inspector general report that found DeJoy imposed policy changes without considering their potential impact—which turned out to be destructive. The IG report observed that package delays reported by post offices across the nation jumped 143% in the weeks after implementation of DeJoy's policies, some of which were later halted by federal courts in the run-up to the November elections.

But with the elections in the rearview, DeJoy—a Republican megadonor—is planning to unveil a fresh set of operational changes that would likely exacerbate mail slowdowns while also hiking prices for consumers and businesses. In testimony before the House Subcommittee on Financial Services and General Government, DeJoy asked congressional appropriators for money to implement the new plan, the details of which have yet to be finalized.

As the Washington Post reported Thursday, DeJoy confirmed earlier news stories indicating that "he would stop flying first-class mail cross-country and planned to eliminate a speedier category of first-class mail to cut costs and help the agency make delivery windows."

While members of Congress, led by Rep. Peter DeFazio (D-Ore.), have sought to shore up the Postal Service's finances by proposing legislation to eliminate the onerous 2006 mandate requiring the U.S. Postal Service to prefund retiree benefits decades in advance, Democratic lawmakers have voiced opposition to DeJoy's plans for additional mail slowdowns.

"The Postal Service has, frankly, become wholly unrecognizable from what it once was," Rep. Rosa DeLauro (D-Conn.), chair of the House Appropriations Committee, said during Thursday's hearing. "Under your leadership, on-time delivery for something as simple as a letter to a loved one declined to just 60 percent and has still not fully recovered."

"This is unacceptable, and frankly, your leadership of the Postal Service has been an utter disgrace," DeLauro continued. "It is simply inexcusable that, even after all this hardship, you are working on a new strategic plan that would permanently slow first-class mail and abandon current service standards."

Rep. Brenda Lawrence (D-Mich.), who worked at the Postal Service for 30 years prior to her election to Congress, told DeJoy Thursday that "we've never had the service issues that I've seen."

"I've never seen trucks backed up for miles to get into a facility," said Lawrence, "and the responsibility of all these things that you've mentioned does rest on your shoulders."

DeJoy's latest appearance before Congress came as President Joe Biden continues to face calls to remove and replace the entire U.S. Postal Service Board of Governors, the body with the authority to terminate the postmaster general. The board is currently dominated by Trump appointees.

"Louis DeJoy grades himself with an 'A' for destroying the Post Office. Fire the entire postal board and then fire this guy now," Rep. Bill Pascrell, Jr. (D-N.J.) tweeted Thursday night.

But Biden has opted to pursue a less aggressive path by nominating officials to fill the three existing vacancies on the postal board, potentially giving the panel's Democrats enough votes to remove DeJoy. The postal board nominees must be confirmed by the U.S. Senate, which is narrowly controlled by Democrats.

"He must be held fully accountable by the Postal Board of Governors, elected officials, and the public for the delays, loss of revenue and business, and for breaking the bond of trust between the people and the public Postal Service," Dimondstein added.