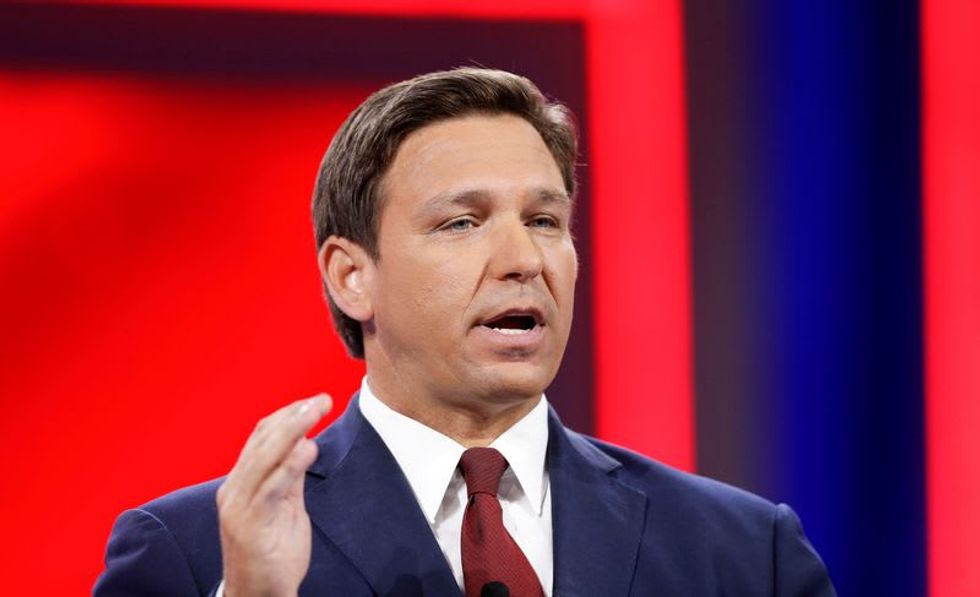 (Reuters) - Florida Governor Ron DeSantis opened a new front in the culture wars this week, taking on one of his state's biggest employers and most powerful lobbyists: Walt Disney Co.

In doing so, DeSantis is attempting to bolster his conservative credentials ahead of a possible run for the 2024 Republican presidential nomination. But he also risks entering a tit-for-tat with a powerful, deep-pocketed corporation that helped attract 76 million visitors to Orlando in 2019 ahead of the COVID-19 pandemic.

At the governor's request, the state's Republican-led legislature swiftly approved a bill during a special session this week that will strip Walt Disney Co of its designation as a self-governing entity.

The move came after the company's opposition to a new state law limiting discussion of LGBTQ issues in schools. Critics dubbed the measure the "don't say gay" bill and called it hateful, but DeSantis said it was needed to protect parents and children.

DeSantis, 43, has been at the forefront of a host of partisan fights playing out across the country.

He pushed back against COVID-19 restrictions, touting Florida as a "citadel of freedom" amid the pandemic. He called for a first-of-its-kind election police force to investigate election crimes and last week signed into law a ban on abortions after 15 weeks of pregnancy.

His rising national profile is driving speculation that the former federal prosecutor, who is seeking re-election this November, is also eyeing a run for the White House.

That could pit him against former President Donald Trump, who endorsed DeSantis, then a low-profile congressman, in his 2018 bid for Florida's governorship. Trump, who lost his re-election campaign in 2020, has repeatedly hinted he wants to seek the presidency again.

DeSantis shares many of Trump's views but would offer the Republican Party a fresh face and less inflammatory style.

"DeSantis is the emerging middle way. If Trump were to quit politics tomorrow, DeSantis would be the heavyweight in the 2024 primary," said Dan Eberhart, a prominent Republican donor and the CEO of oilfield services company Canary, LLC.

DeSantis' spat with Disney carries risks, however, both with centrist voters and corporations.

DeSantis is expected to sign into law the bill that does away with a special tax district created by a 1967 law that allows Disney to self-govern the roughly 25,000-acre Orlando area where its Walt Disney World theme park complex is located.

The financial impact of the legislation on Disney remains unclear, but it may present a major blow to the autonomy it has enjoyed for decades at its sprawling Orlando theme parks. It might also turn into a protracted legal fight between DeSantis and Disney.

Democrats could frame the Disney measure as "anti-economy" in the Orlando area, said Eberhart, adding he thinks DeSantis is "in danger of overplaying his hand on Disney."

Nick Iarossi, a Tallahassee lobbyist who represents business interests and is a DeSantis supporter who lauded his Disney measure, said the move was "raising eyebrows" among Florida companies.

"Companies are calling me and asking: 'Hey if I weigh in on this, what happens?' These companies are definitely reevaluating how, or whether, they weigh in on legislative issues in Florida because there will be adverse consequences," Iarossi said.

Democrats nationally are targeting DeSantis for his stances on Disney and LGBTQ issues.

California Governor Gavin Newsom said on Tuesday that "punishing businesses for speaking out against hatred" was the hallmark of an authoritarian government.

The governor's spokesperson, Christina Pushaw, did not respond to a request for comment.

On Twitter, she said Disney had thrown away its family-friendly brand to side with opponents of the Florida law that bans classroom instruction on sexual orientation and gender identity for children in kindergarten through third grade.

DeSantis remained resolute in a campaign fundraising email to supporters on Wednesday.

"If Disney wants to pick a fight, they chose the wrong guy," stated the email, which was reported by multiple media outlets. "Now is the time to put the power back in the hands of Floridians and out of the pockets of woke executives."