The Conversation
Pterosaurs are not dinosaurs. Warpaint/Shutterstock

If you think of flying dinosaurs, you probably picture an animal with long, leathery wings, sharp claws and a big beak. The animal you are imagining is not a dinosaur, it’s from a group of flying reptiles called the pterosaurs.

These animals are remarkable in their own right: they were the first vertebrates to evolve flight, tens of millions of years before birds or bats. Perhaps people think they are dinosaurs because pterosaurs are sometimes referred to as flying dinosaurs in children’s books. Whatever the reason, pterosaurs deserve attention in their own right.

To this day, a conundrum surrounds pterosaurs: how did they evolve to fly? The evolution of flight has been mapped out for birds. There is a pathway from the development of feathers for display to arboreal (tree-climbing) gliders, then powered flight. However, even the earliest known pterosaurs were specialised flyers with a body moulded for flight. We are yet to find any fossils that give us clues about how pterosaurs first took off from the ground.

Pterosaurs lived alongside the dinosaurs, during a time known as the Mesozoic era (252 to 66 million years ago). They came in a huge variety of forms and ranged the entire globe. Although the most ancient pterosaurs were small, no bigger than seagulls, later members of the group were the largest flying animals to ever exist, with wingspans similar to small planes.

Although pterosaurs were relatives of the dinosaurs, they were an entirely separate group, much in the same way that turtles and crocodiles are related (both are reptiles), but are distinct, with different ancestral origins. Dinosaurs did not fly until true birds (which are a group of dinosaurs) evolved. So pterosaurs were the only reptiles capable of flying for a very long time.

Recently, though, the first steps to solving the origin of pterosaurs were finally taken. Studies in 2021 identified a group of prehistoric animals known as the lagerpetids as the closest known relatives of the pterosaurs by analysing the fossils with modern scanning technology. This helped scientists build family trees of how the fossils are related to each other because the scans showed that they shared anatomy.

Lagerpetids are from the Triassic period, the first period of the Mesozoic era, and appeared roughly 10 million years before the first pterosaurs, 236 million years ago. They were small, graceful and flightless reptiles. One of the 2021 studies showed they shared features of the inner ear with pterosaurs. These features are also convergent (similar, but separately evolved) with features of the inner ear in birds. These features are important to balance and keep the head steady, which could have been integral in the origin of flight. 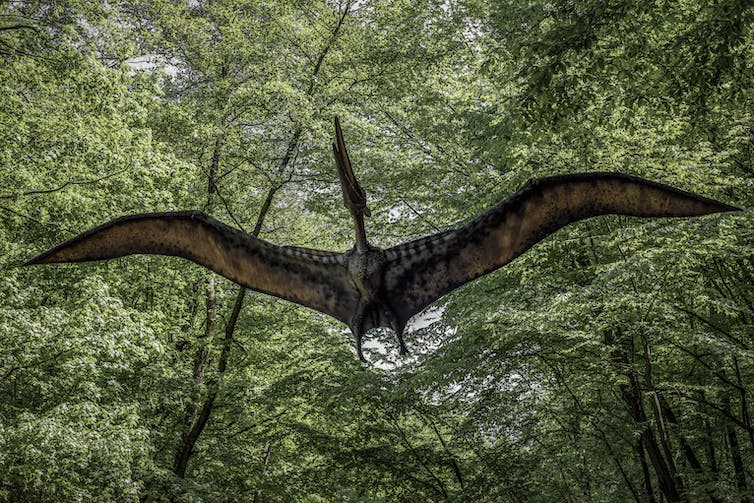 Pterodactyls roamed the land millions of years ago. Jaroslav Moravcik/Shutterstock

Earlier in 2022, scientists took this hypothesis further. They analysed the fossils of a species known as Scleromochlus, a creature that lived in Scotland 235 million years ago.

Schleromochlus was discovered in the early 1900s and is known from seven Scottish skeletons. Their small size and poor preservation made them difficult to study, until now. Palaeontologist Davide Foffa and his team used micro-CT scans to investigate these fossil skeletons. They used this technique to create digital 3D models of every inch of the skeleton and study the anatomy of Scleromochlus in exquisite detail.

Schleromochlus has some fascinating anatomical features, too. Not only did it share features such as its general body structure with other lagerpetids, it also shared skull features with later pterosaurs, such as an elongated, pointed snout.

Schleromochlus, like pterosaurs, couldn’t climb trees. Scientists believe climbing trees and gliding from them probably drove the origin of flight. But Foffa’s study suggests skull features and balance sensory organs set pterosaurs down their evolutionary path to true flight, rather than anatomy associated with tree climbing, such as large, sharp claws for gripping bark.

Although these adaptations for balance could have allowed tree climbing to evolve later, it did not evolve in conjunction with tree climbing. Climbing evolved for some other unknown purpose.

In some ways, the Schleromochlus study raises more questions than answers. When did wings develop? Why did it evolve these sensory balance organs? However, it begins to narrow the differences between pterosaurs and their closest relatives, giving us a more specific point in time to investigate (around 235 million years ago). While their story is incomplete, Schleromochlus takes us one chapter further into telling the tale of the pterosaurs.