Genocide, meaning actions taken with the intent to destroy a group of people because of their identity, happened again in Cambodia in the 1970s. The communist Khmer Rouge regime tried to kill all ethnic Vietnamese and Cham people in the country, resulting in the deaths of 1.5 million to 3 million people. And it happened in 1994 in Rwanda, when the Hutu ethnic group murdered hundreds of thousands of Tutsis.

Today, governments are also carrying out genocide against ethnic minorities in Myanmar, where the military is killing the Muslim Rohingya people. Many experts and some governments, including the United States, also say genocide is happening in China, where the national government is arbitrarily detaining Uyghur people.

Some human rights experts also say that there is growing evidence Russia is committing genocide against the Ukrainian people.

Genocide has not been prevented, almost 75 years after the Genocide Convention was passed, in part because of a misunderstanding about how genocide happens and what prevention looks like.

As co-director of Binghamton University’s Institute for Genocide and Mass Atrocity Prevention and a program director at the Auschwitz Institute for the Prevention of Genocide and Mass Atrocities, I focus on helping students and government officials understand five important things that scholars and practitioners have learned about preventing genocide. Here are those five key points. 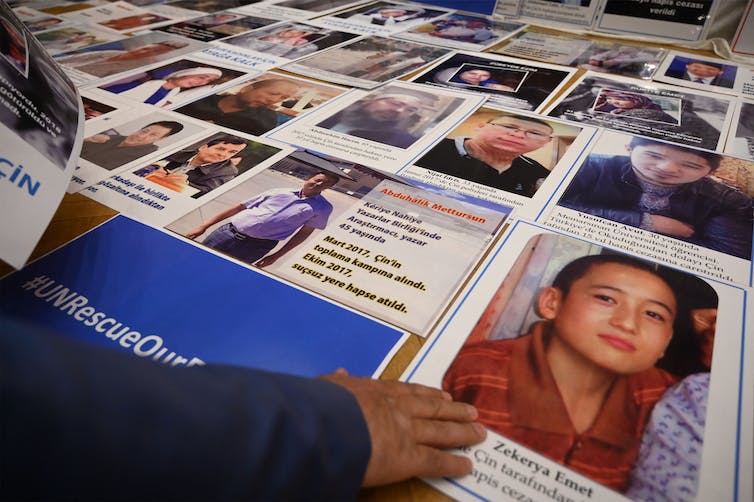 Muslim Uyghur people show photos of their relatives who are detained in China in May 2022.

Genocide is a process, not an event

Although this destruction often happens through mass murder, it can take other forms. It can mean taking children of one group away from their parents and transferring them to another group, for example.

Genocides are not events that happen overnight. They are long-term social and political processes that begin long before mass killing.

For instance, the Nazis did not build death camps immediately when Adolf Hitler was appointed chancellor of Germany in 1933. The Holocaust began with smaller steps, like preventing Jewish people from holding certain jobs, then preventing Jews and non-Jews from marrying each other.

It was not until the late-1930s that the Nazis transitioned to their Final Solution, which called for the destruction of all Jewish people. And the Nazis did not construct the first death camps until 1941. But all these steps over the years constituted what we now call the Holocaust.

Prevention is also a process

When people understand genocide as a process and learn to recognize the early stages that can lead to genocide, there is more opportunity to intervene before people are killed.

First, there are actions people can take before genocide occurs to make sure it never happens. This involves identifying which groups of people are at risk of violence, then passing laws, for example, to protect those groups.

A second stage of prevention involves responses to a genocide once it breaks out. This can include using military troops to quash violence. But it could also extend to things like diplomacy, threats of prosecution and economic sanctions.

Finally, a third stage of prevention only occurs when a genocide has already happened. This stage aims to prevent its recurrence. This can include things like truth commissions, which aim to expose and document mass violence or other periods of turmoil, trials against the perpetrators or reparations to victims.

Obviously, stopping a genocide before it actually happens is the most effective and least costly form of prevention. 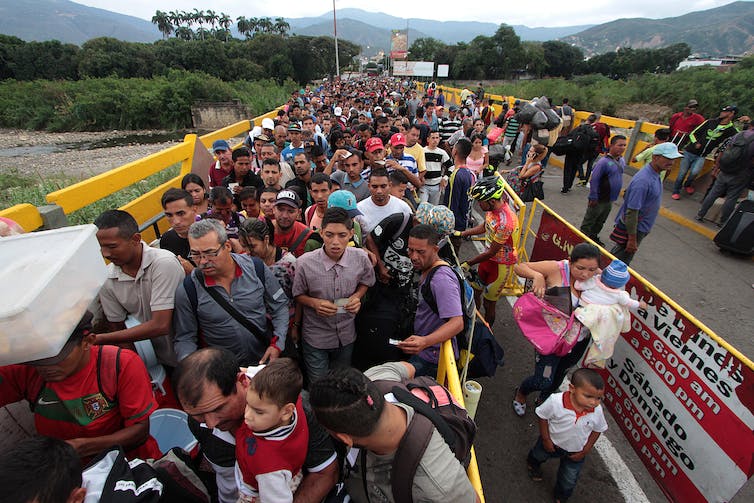 The sudden influx of Venezuelan migrants into Colombia prompted the Colombian government to put in place a plan in 2021 to lower the risk of genocide.

Scholars have identified certain risk factors that make a society more likely to experience genocide. Countries with poor human rights records, for example, are typically at higher risk of genocide.

Poor economic conditions and a country’s history of conflict are also factors that could contribute to large-scale violence against a group of people.

Migrants and refugees are people who are especially at risk of experiencing identity-based violence.

When more than 1 million Venezuelan refugees entered Colombia starting in 2015, for example, many risk factors were present. One risk factor is when a group has unequal access to basic resources and services.

The Colombian government saw this as a risk factor and responded. It introduced a new policy in February 2021 that gave temporary legal status to all refugees. This gave them access to public services, education and health care, immediately lowering the risk for large-scale violence in Colombia.

Every country in the world features some risk factors associated with genocide, including the United States.

But not every country in the world has the same level of risk.

In recent years, many countries have recognized the need to assess their own genocide risk factors. Some have fashioned specific government initiatives focused on genocide prevention. This work spans government departments and ministries to make sure governments keep genocide prevention in focus. Argentina, Mexico, Tanzania and Uganda are among the countries to undertake this kind of work.

The United States also has a national strategy focused on genocide prevention, though it does not look inward at this point – it is only concerned with atrocity prevention in other countries.

There are also several nongovernmental organizations that assist governments in prevention work, including the institute where I work. 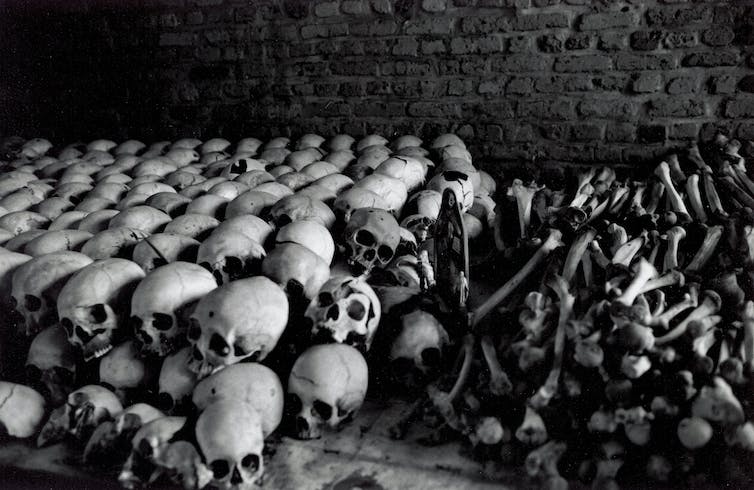 A row of human skulls and remains cover the interior of a church in Kigali following the 1994 genocide in Rwanda.

Prevention isn’t over when the genocide stops

There could be temptation to think that when mass killing stops, the work of prevention is finished. But one of the biggest genocide risk factors is if a society has already been involved with one. For example, the Holocaust happened only a couple decades after Germany perpetrated the genocide of Herero and Nama people in present-day Namibia.

For this reason, the work of prevention continues, even after a genocide is over.

This requires societies to deal with the risk factors that allowed genocide to take place, even as they rebuild.

For instance, after the 2007 elections in Kenya, massive inter-ethnic electoral violence broke out, killing over 1,000 people and displacing at least 350,000. The United Nations and the Kenyan government collaborated with nonprofits and local leaders to develop an early-warning network called the Uwiano Platform for Peace. This provides a hotline system where ordinary citizens can call or text if they hear hate speech or see violent acts. The information is then verified and, if it is credible, the central platform contacts local authorities to respond.

Following the implementation of Uwiano, no large-scale violence was reported after the 2010 and 2013 elections. Of course, Uwiano was not the only reason that Kenya avoided this violence. It took many international, national and local experts and others working together.

There is no single way to prevent genocide. What is clear, however, is that there are many different measures available that, together, can reduce the risk of genocide.

Tech billionaire Elon Musk has triumphed in a Securities and Exchange Commission case that had alleged he broke financial laws with a tweet in 2018 claiming he was going to take Tesla private, reported Axios on Friday.

A jury in San Francisco has ruled in Musk's favor, finding him not liable for securities fraud.

ORLANDO, Fla. — When state investigators delved into the finances of several entities tied to Florida’s 2020 “ghost” candidate scandal, they unearthed major cash contributions from some of the state’s biggest business interests, including an affiliate of the Florida Chamber of Commerce. That entity, dubbed Secure Florida’s Future, contributed $630,000 late in the 2020 election cycle to a network of dark-money groups since subpoenaed by the Florida Department of Law Enforcement. Bank records unearthed by the probe were obtained by the Orlando Sentinel this week. The investigation emerged from r...

Spread of bird flu to mammals could put humans in danger, scientists warn

As a deadly strain of avian influenza continues to decimate bird populations around the world and spread among other animals, some scientists are warning that mammal-to-mammal transmission has emerged as a real possibility with potentially catastrophic consequences for humans.

Over the past year, officials in the United States, the United Kingdom, and Canada have detected cases of the highly pathogenic H5N1 bird flu in a variety of species, including bears, foxes, otters, raccoons, and skunks. Last month, a cat suffered serious neurological symptoms from a late 2022 infection, according to French officials who said that the virus showed genetic characteristics consistent with adaptation to mammals.