How Trumpist terrorism is becoming normalized 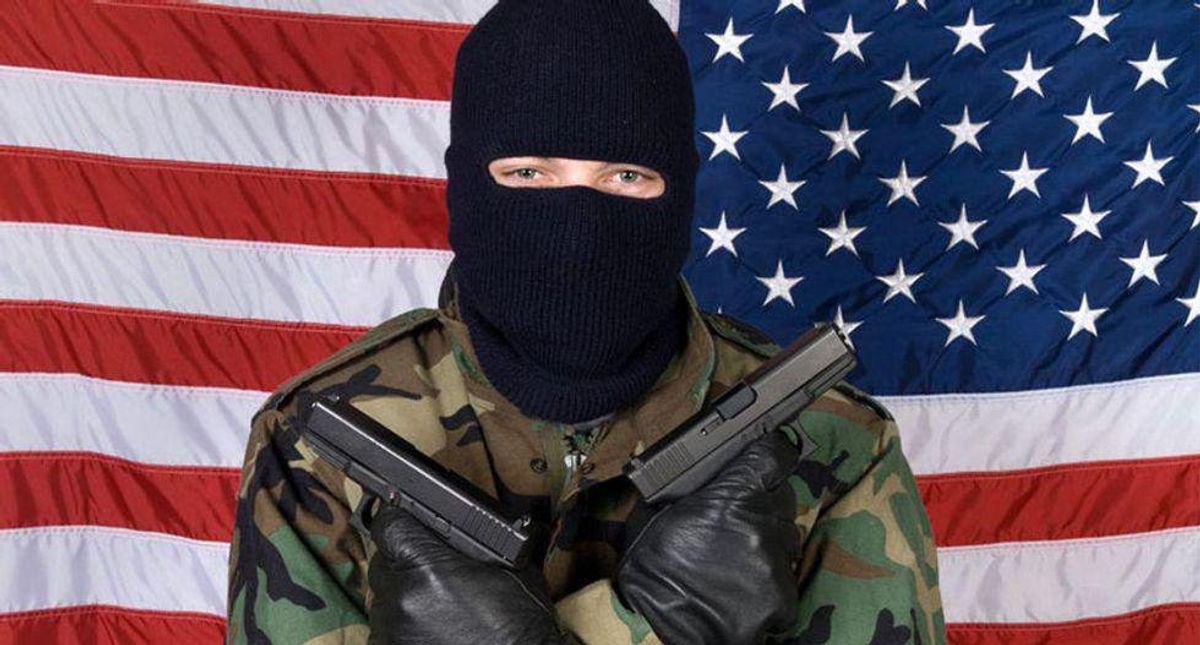 A very particular, cultish and dangerous brand of domestic terrorism has been honed, and we should call it what it is: Trumpist terrorism.

We've rarely if ever experienced domestic terrorism organized not only in the service of an ideology — white supremacy — but in the name of one person, a cult figure for whom people will kill and die, devoted to his cause and taking perceived orders from him.

But that is what is happening now.

Last week the news broke that two California men were arrested for plotting to bomb Sacramento's Democratic headquarters in the name of Donald Trump, inspired by the Big Lie that the election was stolen by Joe Biden. One of the men is alleged to have had five live pipe bombs in his home and "between 45 and 50 firearms, including at least three fully automatic weapons and thousands of rounds of ammunition."

That man, Ian Rogers, also wrote in text messages, before the January 20th inauguration of President Biden, which one agent said showed an attempt to try to stop the inauguration from proceeding:

The men were organizing both before and after the January 6th Capitol assault, and discussed other targets including California's governors mansion, the corporate offices of Facebook and Twitter and Democratic donor George Soros.

In a different time this would be wall to wall media coverage, with strong condemnations coming from the former president himself, and from the leaders of his party. But for much of the media, though they covered it, this was just another story in the blur of insurrection-related stories — including the story of a Virginia insurrectionist group exposed the week before, planning for a "revolution"and led by a man who stormed the Capitol on January 6th and now had the components for 50 homemade bombs.

Needless to say, there was no condemnation statement by the former president — who likely revels in these stories — nor from any Republican Party leader. Even Democratic leaders seemed too busy dealing with all the other assaults on democracy by Republicans to speak out forcefully about these cases.

It's now expected that people will engage in violence in the name of a former president of the United States. That's a blood-curdling reality, but in America right now it's not very shocking, nor surprising. And the greater danger is that if the outcry isn't loud enough — if we don't express outrage no matter how commonplace it now may appear — then it will not only be expected; it will be accepted. More and more extremists will be inspired to take up arms, to organize plots to cause massive violence in the name of Trump, hoping for bigger, more disruptive events to break through.

The Virginia extremists organized a secret militia and used a "bible study group" as cover. They were planning to blow up jails and locations where January 6th attackers who were arrested were being held, and free them. Investigator recovered the bomb components and several weapons, including an AK 47, from the group's leader, Fi Duong, who was seen in the Capitol on January 6th yelling, "We're coming for you Nancy!" The group had been infiltrated by the FBI, and if not for that, as I wrote last week, who knows how far they'd be now? And what other plots are being organized as you read this?

In that case, a member of the white supremacist Three Percenters had been recruited by Duong into the faux bible study group. And the case of the two California men who discussed blowing up the Sacramento Democratic headquarters also has a connection to the Three Percenters:

Court papers said both Mr. Copeland and Mr. Rogers had been previously affiliated with the Three Percenters, whose name is based on the false premise that just 3 percent of American colonists fought the British in the Revolutionary War.
A photograph of a Three Percenters sticker on a vehicle said to belong to Mr. Rogers was included in the documents.

Prosecutors also said one of the men emailed the Proud Boys, another far right white supremacist group loyal to Trump and which was coordinating with others in leading the January 6th attack.

The FBI doesn't officially designate these groups as "domestic terrorist organizations" in the way it labels foreign terrorist groups, constrained by law, because it may be a First Amendment violation to designate Americans in groups based on their beliefs, even as it focuses on "domestic terrorist threats and actions." And there is no charge of "domestic terrorism" under federal law in and of itself, even if someone can be given an enhanced sentence for other crimes on that basis.

Charging these insurrections only with “conspiracy to destroy by fire or explosive a building used or in affecting… https://t.co/XD5hUctV84
— Laurence Tribe (@Laurence Tribe) 1626457504.0

And yet, at this point, we should be even more precisely labeling these particular groups, "Trumpist terrorist organizations."

These are individuals and group sharing an affinity for Trump, whom they take orders from. By not condemning these actions, Trump is implicitly encouraging them. And many of his caustic speeches and attacks on his perceived enemies, including Democrats and the government, promote and incite them.

He of course incited the January 6th insurrection, but he also incited and inspired mass shootings over the past several years, such the El Paso shooting and the Pittsburgh synagogue shooting. And he's inspiring these new plots, as much as any terrorist leader in ISIS inspired attacks in this country and elsewhere.

Trumpist terror groups are clearly organizing around the country, planning violence in the name of Trump and the cause of the Big Lie. They increasingly see Trump now out there giving speeches promoting the Big Lie, and encouraging the anger and the violence. It's hard to know how far and wide this organizing is, but from the the news of the last few months — and even the past three weeks — the danger is rising.

The goal is to make it commonplace to engage in violence, to spread the idea among the Trump minions that they must grasp power by any means necessary. And to make it just another part of the political landscape that the media and politicians view as inevitable.

But we must continually sound the alarm, doing everything we can to keep it from becoming the new normal.