How will the white supremacy brand of today’s Republican Party end? 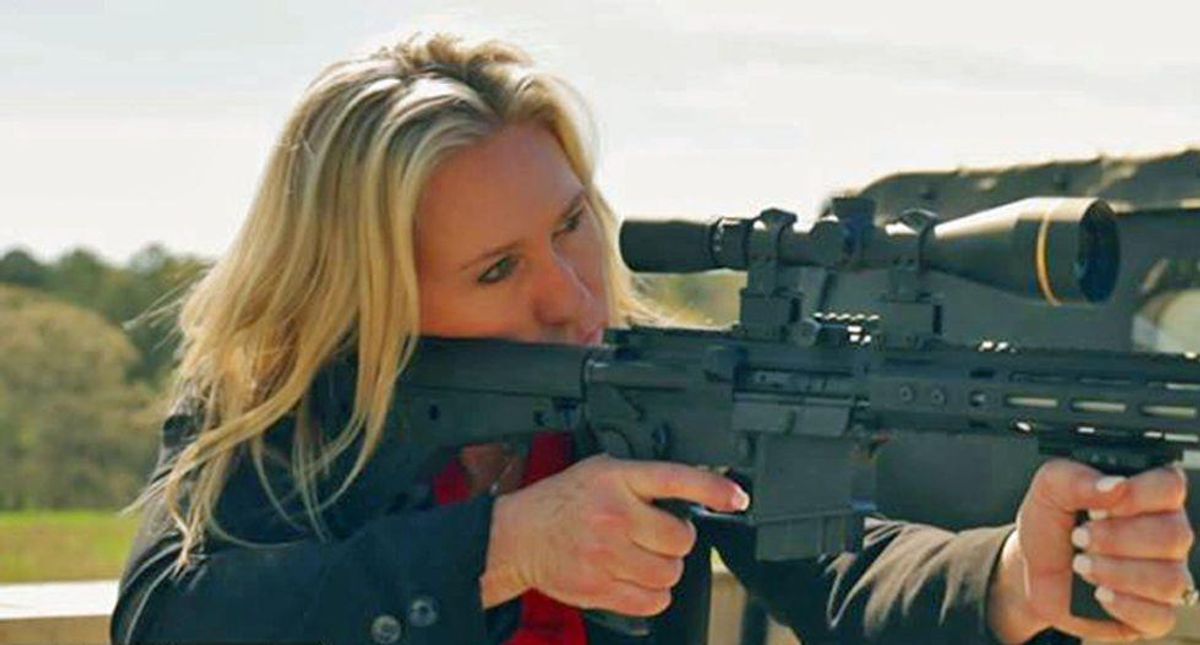 So, Marjorie Taylor Greene, who does not much participate in the legislative process other than occasionally trying to stop it, and has lost all her committee assignments, raised over 3 million bucks in the last quarter.

A really good first-quarter haul for a freshman member of Congress who's actually getting things done would be $250,000 to a half million dollars. Greene blew the doors out.

There was a time in America when "conservative" meant, "In favor of moving toward a better country, but doing it slowly and cautiously."

We use the word "conservative," in fact, to generically mean "cautiously."

But the last five years have irrefutably shown that when American politicians use the word conservative these days, what they really mean is white supremacist.

White supremacy has become the central brand of today's Republican Party, and, in retrospect, has been at the core of that Party's explicit efforts ever since Richard Nixon's 1968 Southern Strategy.

And for "movement conservatives" it really dates even farther back than that. Consider one of the top founders of today's conservative movement (and of the National Review publication), William F. Buckley.

People of a certain age (like me) well remember Buckley's 1966-1999 show Firing Line every Sunday on PBS as he pontificated about the wonders of "conservatism" and promoted Republican politicians. My dad was a religious viewer; it was a major force in national politics.

In a 1957 editorial titled Why the South Must Prevail, he laid out explicitly what the foundation of conservatism must be.

"Again, let us speak frankly," Buckley wrote. "The South does not want to deprive the Negro of a vote for the sake of depriving him of the vote."

No, this wasn't just malice or performance. It was all about power, enforced by the state. And about defining, once and for all, the core animating principle of the newly resurgent conservative movement.

"In some parts of the South," Buckley wrote, "the White community merely intends to prevail — that is all. It means to prevail on any issue on which there is corporate disagreement between Negro and White. The White community will take whatever measures are necessary to make certain that it has its way."

He asked, rhetorically, if the South is "entitled" to "prevail" even in rural areas of the country or large cities with majority Black populations?

"The sobering answer," Buckley wrote, "is Yes — the White community is so entitled because, for the time being, it is the advanced race."

So here we are.

Americans would like to believe that the people who sent Marjorie Taylor Greene all that money were concerned about taxes or trade or America's standing in the world, but it's obvious now that they are not.

They want to support a white congresswoman from Georgia because she, like Buckley in his day, is waving all the flags associated with white supremacy.

After she jumped into the Republican primary in the state where I lived for 13 years, she pushed out a series of videos complaining about an "Islamic invasion" of elected office, presumably referencing Reps. Ilhan Omar and Rashida Tlaib, and conflated Black and Hispanic men with "gangs and dealing drugs."

She started hustling the 2020 version of the Protocols of the Elders of Zion saying that Jewish Billionaire George Soros had something to do with the Nazis and is supernaturally controlling world events. And let's not forget the Jewish space lasers.

This was so offensive that House Minority whip Steve Scalise of Louisiana, who had previously described himself as "David Duke without the baggage," endorsed her primary opponent, and Congressman Jody Hice of Georgia withdrew his endorsement of her. She nonetheless won both the primary and the general elections, using Trump as a symbol of and for white supremacy.

But Greene is not the problem; she's merely one of many, and a symptom of how widespread and popular white supremacy and white nationalism are in today's America. These ideologies have become the number one animating force in Republican politics.

The Chicago Project on Security and Threats did a deep dive into which counties had sent people to Washington DC on January 6 to try to overthrow our republic.

The Project's Director, Robert A. Pape, wrote in The Washington Post, "[T]he people alleged by authorities to have taken the law into their hands on Jan. 6 typically hail from places were non-White populations are growing fastest."

They also did two independent surveys early this year and found that, "One driver overwhelmingly stood out: fear of the 'Great Replacement.'"

The Great Replacement is what animated the white mass murderer in Christchurch, New Zealand as well as the white man who slaughtered 20 people at a shopping center in El Paso, Texas. It's why white nationalist Tim McVeigh blew up the Oklahoma City Federal Building.

It refers to the fear some white people have of being "replaced" by people of color, and was apparently endorsed this week by Tucker Carlson on Fox News.

Using this hook, the Republican Party has explicitly rebranded itself in the last five years.

They've embraced statues of Confederate generals and oppose stripping their names from military bases. They are working as hard as they possibly can to stop Black people from voting, while demonizing cities like Pittsburgh, Detroit and Milwaukee with charges of "voter fraud" because, one must assume, they're majority-Black cities.

As Jessica Corbett wrote for Common Dreams about Texas Republicans:

"Common Cause Texas on Thursday shared a leaked video of a Harris County GOP official discussing plans to 'build an army' of 10,000 election workers and poll watchers, including some who 'will have the confidence and courage' to go into Black and Brown communities to address alleged voter fraud that analyses show does not actually exist."

And it's not just the GOP that has gone down this road. The White Evangelical movement is right there with them, with the emphasis on "White."

This is extraordinarily dangerous stuff.

As Holocaust survivor Sidney Zoltak said, and was reported in yesterday's New York Times, "The diabolic plan to annihilate the Jews in Europe was established in small increments. Way before the establishment of the concentration camps, the ghettos, the death camps, the mobile killing units, it started with words."

Words that characterized Jews, gypsies, gay people and socialists as vermin, as invaders, as an infestation. Words like Donald Trump and his followers use regularly.

And the Nazis were in the streets, both in Germany in the 1930s and in America over the past five years, chanting things like, "Jews will not replace us." Today, they are Donald Trump's "very fine people."

The first generation of majority non-white Americans is already born and entering school. There's nothing white people can do to stop this trend.

Thus, white Americans in the GOP (the vast majority of the Party) are facing a stark choice.

They can go down yelling and screaming and take a lot of lives with them, tearing this country apart pursuing their "Lost Cause."

Or, they can start working for a country that actually realizes the vision of America's founding promise, that "All men are created equal."