Hundreds of truckers pour into Ottawa to protest vaccine requirements 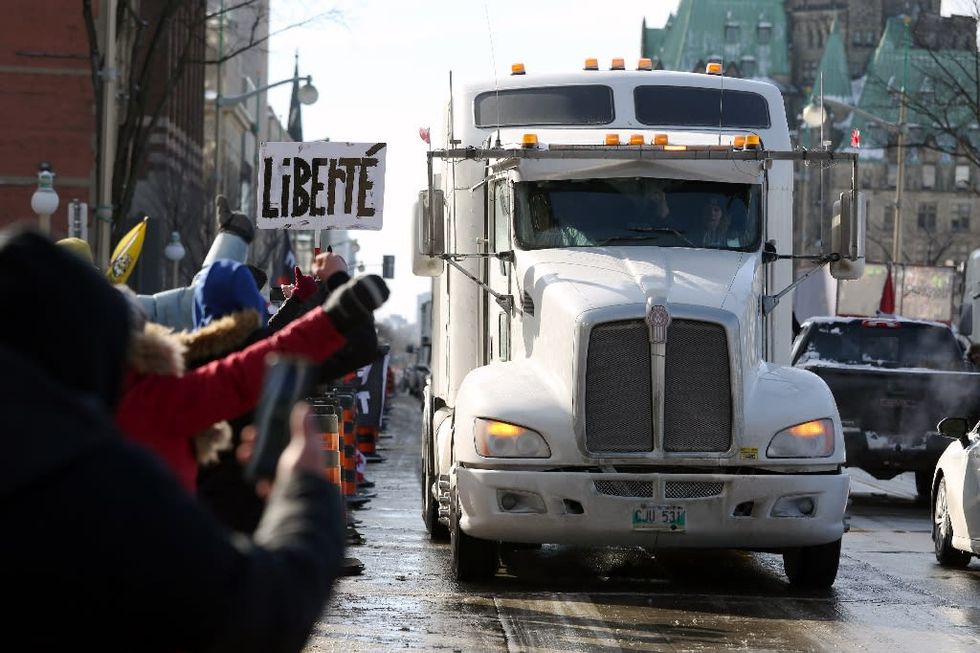 Supporters of the Canadian truckers' protest against Covid-19 vaccine mandates pulled in front of the Parliament building in Ottawa on January 28, 2022

Ottawa (AFP) - Hundreds of truckers drove their giant rigs into the Canadian capital Ottawa on Saturday as part of a self-titled "Freedom Convoy" to protest vaccine mandates required to cross the US border.

Flying the Canadian flag, waving banners demanding "Freedom" and chanting slogans against Prime Minister Justin Trudeau, the truckers were joined by thousands of other protesters angered not only by Covid-19 restrictions but by broader discontent with the government.

There was an enormous clamor as hundreds of big trucks, their engines rumbling, sounded their air horns non-stop.

Closer to Parliament, families calmly marched on a bitterly cold day, while young people chanted and older people in the crowd banged pots and pans in protest under Trudeau's office windows.

Canadian media said the prime minister and his family had been escorted out of their home and taken to a secret location in the capital, with much of the protesters' wrath directed at Trudeau.

"I want it all to stop -- these measures are unjustified," said one demonstrator, 31-year-old businessman Philippe Castonguay, outside the Parliament building.

He had driven seven hours from northern Quebec province to make his feelings known: "The vaccination requirements are taking us toward a new society we never voted for," he said.

The protest originated last week in western Canada, where dozens of truckers organized a convoy to drive from Vancouver to Ottawa to demonstrate against Covid-related restrictions, particularly a vaccination requirement for truck drivers.

Both Canada and the United States imposed that requirement in mid-January, affecting drivers who cross the 5,500-mile (9,000-kilometer) border -- the world's longest.

The movement rapidly gained steam as the original cross-country convoy was joined by others en route to the federal capital.

Their rallying point was Parliament Hill, in the heart of Ottawa.

Stephen Penderness, an unvaccinated 28-year-old trucker from Ontario, said he was protesting for all Canadians, not just his fellow drivers.

"It's actually for every single person... everybody on the road," he said. "It's all about your free choice."

Quebec resident Louise -- who had come to support the truckers but declined to give her full name -- agreed. "We shouldn't be forced to get vaccinated, regardless of the vaccine."

She said vaccine passports "represent an intrusion in our personal lives."

There was a strong police presence around the federal capital, amid fears the protest could turn violent.

"Let me be very clear," he told reporters on Friday, "we are prepared to investigate, arrest if necessary, charge and prosecute anyone who acts violently or breaks the law."

He urged local residents to stay off the roads.

The zone around the Parliament was closed for the weekend.

Police said they fear some demonstrators will stay beyond the Saturday protest, snarling traffic further.

Trudeau, who is currently in isolation after a Covid exposure, on Wednesday defended the vaccination mandate, noting that 90 percent of drivers are already vaccinated.

He called the truckers headed for the city a "small fringe minority" who do not represent the majority of Canadians.

Trudeau said Friday that the truckers' views -- which he described as anti-science, anti-government and anti-society -- posed a risk not only to themselves but to other Canadians as well.

The leader of the Conservative opposition, Erin O'Toole, urged the protesters to remain peaceful. He has promised to meet with the truckers.

To date, 82 percent of Canadians aged five or older have been vaccinated against Covid-19. Among adults, the figure is 90 percent.

The Canadian Trucking Alliance, a major industry group, said the vast majority of the country's truck drivers are vaccinated. It has "strongly disapproved" of the gathering in Ottawa.