Netanyahu says Israel will pursue Hamas as long as necessary 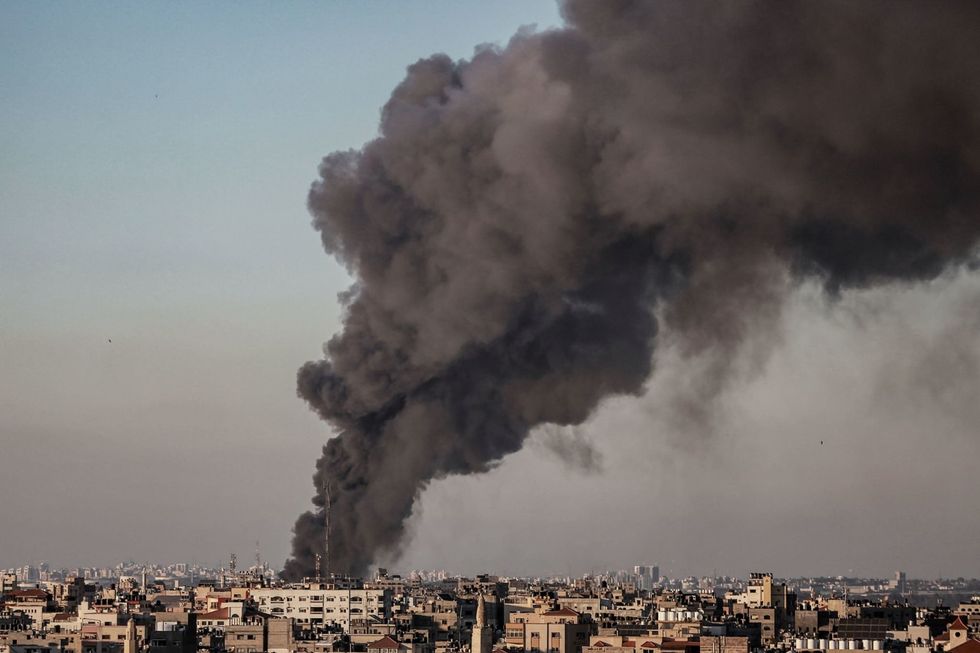 "This [military] operation will continue as long as it takes until we achieve our goals and bring peace and security to all Israeli citizens," the Jerusalem Post quoted the prime minister as saying.

Israel's security cabinet is set to meet on Sunday, the Jerusalem Post reported.

Rockets fired by militant Palestinians continued to rain on Israeli cities on Saturday, while warning sirens wailed in the desert city of Beersheba in southern Israel and in border areas near Gaza, the Israeli army said. Alarms also went off several times in Tel Aviv, with the latest alarm trigged in the Israeli coastal metropolis late Saturday.

At least one person was killed in a rocket attack on the greater Tel Aviv area on Saturday.

The air force destroyed a high-rise in the Gaza Strip that housed the offices of several media organizations, the military said.

The military said the building also contained "military assets" belonging to the Hamas movement, adding it had warned civilians ahead of the strike and left them time to evacuate.

The news agency had been informed in advance of the airstrike on the high-rise, he said. A dozen AP journalists and freelancers were pulled to safety in time, he added.

Pruitt said he was "shocked and horrified" that the Israeli military destroyed a building with media offices. He said the world would now know less about what is happening in Gaza.

Qatari broadcaster Al Jazeera said it too had its office in the high-rise.

After the attack - the fifth high-rise destroyed by Israeli airstrikes in the current conflict - a spokesperson for Hamas said Tel Aviv should prepare for an "answer that will shake the earth."

The Israeli army said it had targetted the house of Khalil al-Hayya, deputy head of the Hamas political bureau, and other ranking officials.

According to the Health Ministry in Gaza, about 145 Palestinians have been killed and 1,100 injured since fighting escalated on Monday.

According to the Magen David Adom rescue service, 10 people were killed and 636 injured in Israel as a result of the rocket fire over the past few days.

Palestinian militants have been continuously firing rockets at Israel since Monday. More than 2,300 have been fired, according to Israel's army, although about 20 per cent go down over Gaza without reaching Israeli territory.

Israel has responded with airstrikes and artillery shelling, striking more than 650 targets, according to an officer.

Netanyahu said he had spoken with US President Joe Biden about the Gaza conflict, the second official contact since it began.

"The president reaffirmed his strong support for Israel's right to defend itself against rocket attacks from Hamas and other terrorist groups in Gaza," the White House said in a statement after the call.

A separate White House statement on a phone call with Mahmoud Abbas said Biden briefed the Palestinian Authority president on US diplomatic engagement in the ongoing conflict.

The US president stressed his commitment to a negotiated two-state solution as the best way to achieve a just and lasting solution to the Israeli-Palestinian conflict.

Civil unrest has also been mounting between in Israel's Jewish and Arab populations, with protests and riots reported.

According to the Palestinian Health Ministry, at least nine people died in clashes in the West Bank and 21 were severely injured. The Israeli army initially did not comment.

Rising tension first came to a head during the Muslim fasting month of Ramadan, with clashes at a Jerusalem holy site as well as over the forced evictions of Palestinians in the East Jerusalem neighbourhood of Sheikh Jarrah.