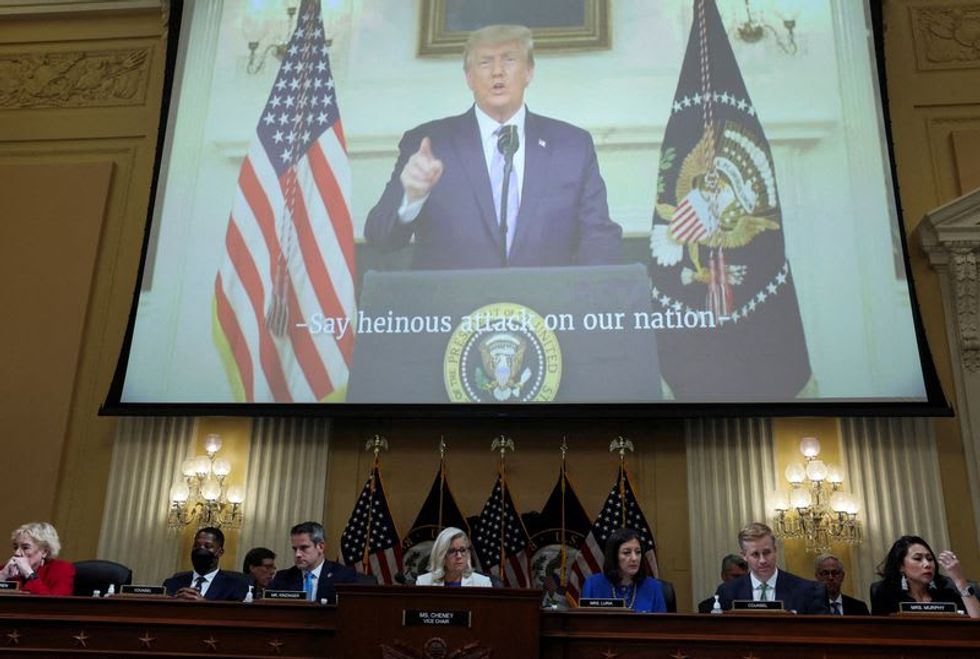 WASHINGTON (Reuters) - After losing the 2020 election, Donald Trump ignored close allies who told him that his claims of widespread election fraud were untrue, and when the followers who believed his false accusations stormed the U.S. Capitol, he sat back and watched.

That was the narrative the U.S. House of Representatives' select committee investigating the Jan. 6, 2021, attack laid out in eight hearings over six weeks, which wrapped up with a study of the former president's actions during the 187-minute assault on Congress by thousands of his supporters.

"President Trump sat at his dining table and watched the attack on television while his senior-most staff, closest advisors and family members begged him to do what is expected of any American president," U.S. Representative Elaine Luria said. "President Trump refused to act because of his selfish desire to stay in power."

Some 18 months after the deadly assault, the hearings replayed video of rioters smashing their way into the Capitol, screaming "Hang Mike Pence" as they hunted the vice president who Trump had called on to overturn his election defeat.

They featured hours of testimony, some live and some recorded, from close Trump allies including former Attorney General Bill Barr, who dismissed Trump's fraud claims as "bullshit," and former White House staff including one who recalled an enraged president hurling plates, leaving ketchup running down a wall.

The hearings were intended to lay out a case that the Republican Trump violated the law as he tried, for the first time in U.S. history, to stop the peaceful transfer of power from one president to the next.

It is not yet clear if the Justice Department will bring charges against Trump, but the hearings appear to have somewhat hurt his standing with Republican voters. A Reuters/Ipsos poll completed on Thursday found that 32% of Republicans say Trump should not run for president in 2024 -- a possibility he continues to flirt with publicly -- up from 26% who said that at the start of the hearings.

Attorney General Merrick Garland this week declined to say whether the Justice Department would charge Trump. But he did not rule it out.

"No person is above the law in this country. I can't say it any more clearly than that," Garland told reporters on Wednesday.

Trump and his allies -- including some Republicans in Congress -- deny he did anything wrong and dismiss the committee of seven Democrats and two Republicans as politically motivated.

Congressional Republicans last year blocked a proposal by Democrats for a bipartisan commission on Jan. 6, similar to the one convened after the 9/11 attacks, leaving the power to pick members in the hands of House Speaker Nancy Pelosi. Republican Representatives Liz Cheney and Adam Kinzinger joined the panel, which presented a scripted case without the verbal combat common in congressional hearings.

More than 850 people have been charged with joining in the riot, on a wide range of charges ranging from illegally entering restricted federal property to seditious conspiracy. More than 325 have pleaded guilty so far and the Justice Department has also scored multiple guilty verdicts in the cases of defendants who chose trial by jury.

In another high-profile case, prosecutors have charged Trump adviser Steve Bannon with contempt of Congress for refusing to answer a subpoena from the committee. Closing arguments in that case are expected on Friday.

The leaders and more than a dozen members of the right-wing Proud Boys and Oath Keepers have been charged with seditious conspiracy for their alleged role in organizing the attack, charges that carry sentences of up to 20 years in prison.

Still, critics have accused the Justice Department of not doing enough to investigate Trump or his inner circle for their efforts to overturn his election defeat.

But there are signs that the investigation appears to be broadening beyond the riot itself.

Under the leadership of the Matthew Graves, the U.S. Attorney in D.C. who was sworn in last fall, the department has started issuing grand jury subpoenas to electors in key battleground states, including some electors who signed bogus certificates certifying the election for Trump.

According to one May 5 subpoena seen by Reuters, prosecutors are seeking communications between electors and federal employees, "any member, employee or agent of Donald J. Trump."

Kristy Parker, a former federal prosecutor now with the non-profit group Protect Democracy, said she believes there is enough evidence to warrant a criminal probe into Trump's conduct.

"If DOJ ultimately decides that it isn't going to pursue charges against Trump, someone is going to have to explain to the public," Parker said in an interview. "Too much has come out now."

Kinzinger said the committee would urge changes to laws and policies intended to head off future attempts to overturn election results. A bipartisan Senate group this week introduced new legislation that would make clear that the vice president does not have the authority to throw out election results.

Such reforms were vital to guard against a repeat of the chaos and bloodshed of Jan. 6, Kinzinger said.

"The forces Donald Trump ignited that day have not gone away. The militant, intolerant ideologies. The militias. The alienation and the disaffection. The weird fantasies and disinformation," Kinzinger added. "They're all still out there, ready to go. That's the elephant in the room."