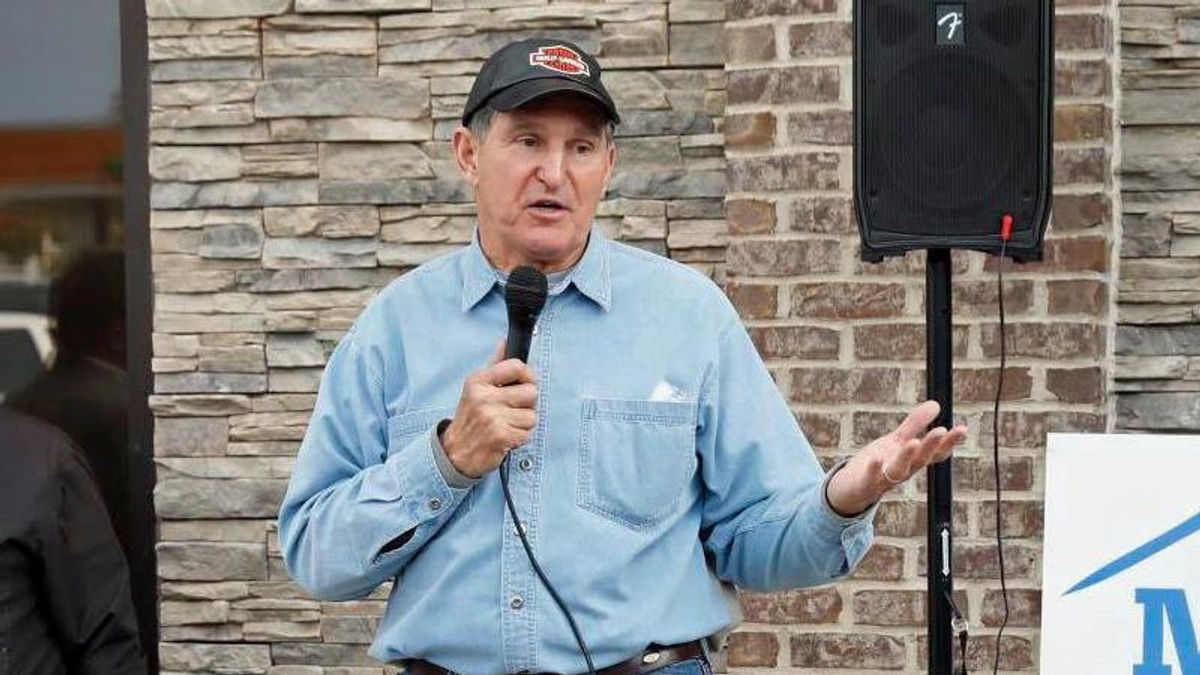 Sen. Joe Manchin won praise from the Daily Caller and Fox News contributors while infuriating voting rights advocates on Tuesday with his suggestion that scrapping the filibuster and passing sweeping, popular pro-democracy reforms would spark a second insurrection just months after a right-wing mob stormed the U.S. Capitol.

The West Virginia Democrat's comments came in a wide-ranging interview with Vox. With an evenly split upper chamber in which Vice President Kamala Harris breaks tie votes, the party's most conservative senator plays a key role in advancing or thwarting the legislative efforts of President Joe Biden and Democratic congressional leaders. In contrast to his discussions with Republicans about Biden's infrastructure proposal, Manchin publicly insists he is "not a roadblock" to the president's agenda.

The For the People Act, which passed the Democrat-controlled House in March and is backed by Biden, aims to modernize voting registration, restore the Voting Rights Act, end gerrymandering, increase election security and campaign transparency, empower small donors, and implement various ethics reforms. A wave of voter suppression bills introduced this year by GOP state lawmakers has bolstered demands for enacting it.

Some filibuster reformers hope that, as the year goes on, the reality of Republican obstruction will become clear to Manchin and he'll be driven to change his mind—that Senate rules will in the end be just as negotiable to him as the details of Biden's stimulus bill. For instance, reformers hoped a GOP filibuster of Democrats' big voting rights bill, the For the People Act, could spur holdout senators to change the rules to pass it, because it's so important.
Manchin recoils at the very idea. "How in the world could you, with the tension we have right now, allow a voting bill to restructure the voting of America on a partisan line?" he asked. He says that 20 to 25% of the public already doesn't trust the system and that a party-line overhaul would "guarantee" that number would increase, leading to more "anarchy" like that at the Capitol on January 6. He added: "I just believe with all my heart and soul that's what would happen, and I'm not going to be part of it."

Manchin, who has repeatedly made clear that he is opposed to abolishing the 60-vote legislative filibuster, insisted to Prokop that he will not be "that one vote that would basically destroy it." The senator also reportedly believes his strategy to force bipartisanship is working, saying that because fellow Democrats know he is "adamant" about it, "there have been more talks of compromise now."

While the right-wing media embraced Manchin's remarks on the For the People Act—which polling has shown is popular among Democratic, Independent, and Republican voters—and the filibuster, progressive critics didn't hold back in their responses to his warning about possibly triggering a repeat of the January attack by supporters of former President Donald Trump and his "Big Lie" about the 2020 election.

"I believe this is called 'letting the terrorists win,'" tweeted Justice Democrats spokesperson Waleed Shahid, responding to a Twitter thread in which Prokop highlighted key takeaways from the Manchin interview.

Others quickly piled on. Among them was Evan Weber, co-founder and political director of the Sunrise Movement, who said that it appears Manchin "only cares about the 'distrust in the system' from predominantly white supporters of Donald Trump, not from the Black, Brown, and young Americans being locked out of representation by restrictive voting laws and gerrymandering."

Weber was not alone in acknowledging existing and potential future barriers to casting ballots. As Jordan Zakarin of More Perfect Union put it, referencing the new census numbers that determine congressional apportionment: "Florida, Texas, and Georgia are all gaining a congressional seat. Joe Manchin just invited Republicans to gerrymander each of them."

Responding sarcastically to Manchin's question—"How in the world could you, with the tension we have right now, allow a voting bill to restructure the voting of America on a partisan line?"—Michael McDonald, a University of Florida professor who specializes in U.S. elections, said, "Yeah, like that's not happening anywhere right now."

As Common Dreams previously reported, the Republican-controlled Florida state Senate marked Confederate Memorial Day on Monday by passing a voter suppression bill that is similar to a law enacted by the Georgia GOP in March. The vote provoked new demands for protecting voting rights with federal legislation.

"Republicans in dozens of states and on the Supreme Court are passing voting restrictions along party lines and will only grow emboldened if they see that Dems in Congress won't do anything about it because of GOP unity against voting rights," Daily Kos Elections staff writer Stephen Wolf warned Tuesday.

Pod Save America co-host Dan Pfeiffer, who served as a senior adviser to former President Barack Obama, tweeted that "Republicans are restructuring American elections on a partisan [basis] with laws designed to stop people from voting in state after state and Manchin's response is to do nothing."

In the words of writer Thor Benson: "Manchin is determined to reward the insurrectionists."