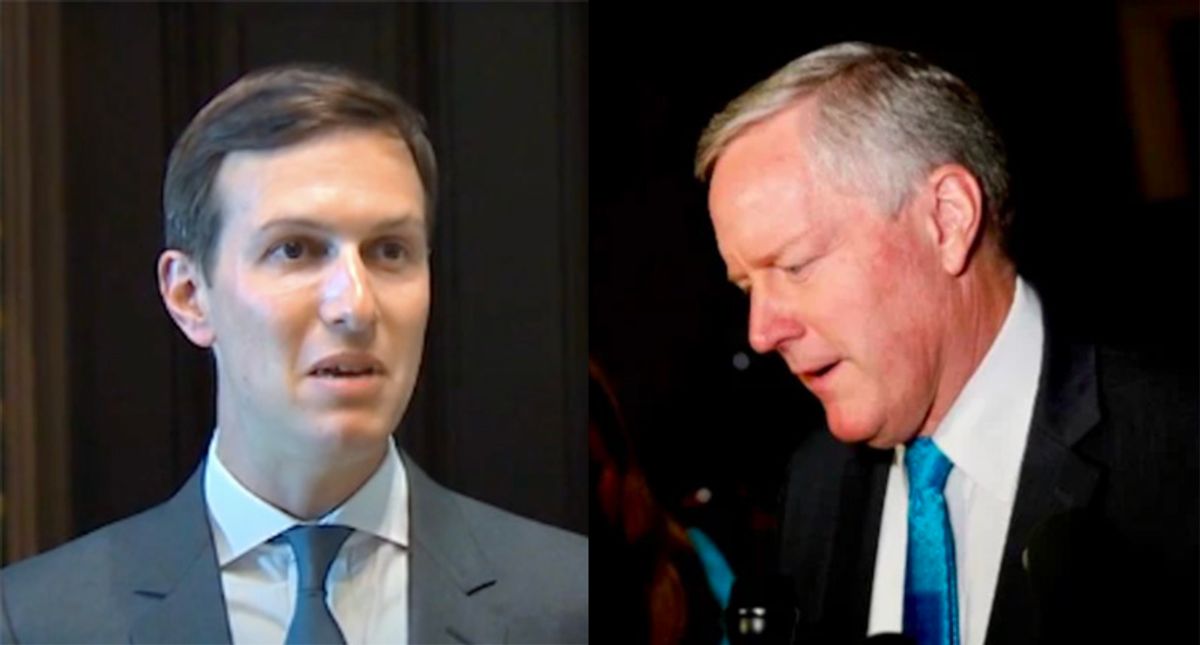 In the wake of last Wednesday's attack on the Capitol, President Trump is reported to have compiled a lengthy list of potential subjects of presidential pardons, including top aides, outside advisers, family members, rappers and other celebrities, and himself. Among those on the list is current White House Chief of Staff and former North Carolina congressman Mark Meadows, who has so far not been accused of a crime, but could be in jeopardy for his role in the now-infamous phone call during which Trump pressured Georgia's secretary of state to "find" votes for him, an apparent solicitation of fraud.

In addition to potential criminal exposure, Meadows identified himself in his White House capacity during an overtly political conversation and would appear to have violated the Hatch Act, a federal statute that the Trump administration has rendered virtually meaningless. Trump's pardon power would not affect any possible civil action on campaign finance violations that might result from a complaint that a watchdog group filed against Meadows with the Federal Election Commission this fall, based on Salon's reporting.

On the Jan. 2 call between Trump and Georgia Secretary of State Brad Raffensperger, a tape of which was leaked the next day to the Washington Post, Meadows played a dual role as emcee and translator for Trump's possibly criminal demands. At the top of the conversation, he identifies himself as "the chief of staff," then lists the participants, including the mysterious role of lawyer Cleta Mitchell, who Meadows said "is not the attorney of record but has been involved." Later, Trump asked Raffensperger to "find" enough votes for him to win the state.

The president also warned Raffensperger that both the secretary of state and his general counsel, Ryan Germany — who was also on the call — were taking a "big risk" by not complying with Trump's demands, suggesting they might be opening themselves up to criminal liability. "It is more illegal for you than it is for them," Trump said, apparently referring to unnamed others he believed had committed election fraud, "because you know what they did and you're not reporting it. That's a criminal, that's a criminal offense. And you can't let that happen. That's a big risk to you and to Ryan, your lawyer."

The tape's publication prompted two House Democrats to ask FBI Director Christopher Wray to open a criminal probe, saying that they "believe the president engaged in solicitation of, or conspiracy to commit, a number of election crimes." Former attorney general Eric Holder tweeted that it is a federal crime for a person "who in any election for federal office knowingly and willfully deprives, defrauds or attempts to deprive or defraud the residents of a state of a fair and impartially conducted election process."

Election lawyer Matthew Sanderson told NBC News, however, that it would be difficult to meet the bar of criminal intent "against an individual who seems pathologically unable to recognize his own loss." That may be true, other experts say, but in legal terms would not matter: Trump had been repeatedly informed of the reality of the situation for nearly two months, including during the phone call in question.

Meadows, who pushed Raffensperger for cooperation up until the final call's moments, does not have that same exit ramp available. However, he may be able to avail himself of another ignorance plea.

"It is possible that Meadows could be involved in a conspiracy to defraud Georgia electors of their rightful electoral votes," election law expert Rick Hasen told Salon. "The problem is that we don't know that Meadows had any idea that Trump was going to engage in potentially criminal activity on the call."

Mitchell, the veteran attorney on the call, resigned from her senior position at the prominent Washington== firm Foley Lardner when the tape became public. She had previously done legal work for Meadows' congressional campaign, and it seems likely that the chief of staff asked her to join the call and help steer the legal discussion. Such a move — adding an election law expert unaffiliated with Trump's campaign or fringe groups — could indicate that Meadows did anticipate illegal activity from the president, who one year earlier had been impeached for blatant extortion during a political phone call.

On Jan. 4, Citizens for Responsibility and Ethics in Washington (CREW), an accountability watchdog organization, filed a criminal complaint against the president that referred Meadows' role to the Justice Department: "While this complaint focuses on President Trump's conduct, we believe that your offices should also review the conduct of Mr. Meadows, Ms. Mitchell, and any other individuals who aided the President's likely illegal activity." The document also points out that Meadows sought during the call to access voter data that was protected by law.

As for the other possible liabilities facing Meadows, Hatch Act violations are administrative and do not carry criminal charges — but the alleged FEC violations could.

In October, Salon reported that the Meadows campaign reported spending thousands of dollars on what appear to be personal expenses, including for gourmet cupcakes, private clubs, a Washington jeweler and lodging at the president's hotel. CREW later filed a complaint urging the FEC to administer any and all appropriate fines and to take further action, "including, but not limited to, referring this case to the Department of Justice for criminal prosecution."

The complaint cites suspicious transactions among nearly $75,000 in campaign expenditures after Meadows announced his retirement from Congress in December 2019, payments that extended well past his resignation from the House when he joined the White House on March 30.

"One of the clearest rules in campaign finance is you can't spend your campaign's finances on yourself," Noah Bookbinder, director of CREW, said in a statement accompanying the complaint.

Meadows' campaign committee kept on racking up expenses throughout 2020, including more than $6,500 in spending at numerous clubs and high-end restaurants. Other charges included grocery stores and the Lavender Moon cupcake bakery in Washington. FEC records also show that the campaign dropped $2,650 on "printed materials" from Washington custom jeweler Ann Hand on the day Meadows resigned from Congress.

Brett Kappel, a campaign finance expert at the firm Harmon Curran, previously told Salon he could see "no legitimate explanation for that one." The purchase, he said, was strongly suggestive of a personal use violation, and could indicate that Meadows had made false statements to the FEC, another crime.

Hand, 87, told Salon in a phone interview that her custom work for private clients can run well above $10,000, and her website showcases a number of individualized pieces, some fashioned for members of Congress and the White House. Photos show that Meadows' wife, Debbie, wore a necklace to the Republican National Convention event on the White House lawn that matches one of Hand's designs.

"Mark and Debbie are wonderful clients," Hand said. She said she could not remember any specific purchases that the former congressman made at the time, adding that even if she could, she would not discuss them.