The Conversation
Researchers studied 13 fossil megalodon teeth as well as those of wild and aquarium sharks to determine their place in the food chain. Pictured is one of the world’s largest set of shark jaws, made up of about 180 fossil teeth from an ancient megalodon that is believed to have been the size of a school bus. Picture: AFP

Millions of years ago, giant sharks three times larger than today’s great whites stalked the world’s ocean. They’re long gone now, but occasionally, someone walking on a beach spots an odd triangular shape in the sand. On closer inspection, they realize it’s a fossilized tooth as large as a human hand, with sharp serrated edges. And they have to wonder: What was that beast eating?

These fossilized teeth hold clues to a mystery about a legend of the seas, a mammoth creature that was at the apex of the food chain – and then vanished. 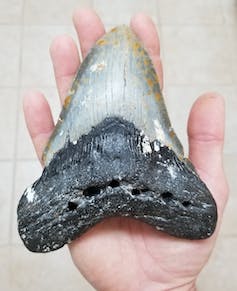 A megalodon tooth found on the North Carolina coast.Harry Maisch

It’s known as the megalodon, believed to be the largest shark species to ever exist. Evidence in the teeth and bite marks found on fossilized bones suggest these ancient sharks were swimming the ocean between 23 million and 3.5 million years ago. Scientists have estimated they reached lengths upwards of 50 feet (15 meters) – longer than a city bus.

The megalodon was the last species of a group of sharks called the megatooth sharks. We study the chemistry of fossils to better understand ancient animals, and while many mysteries remain about megalodon’s life and eventual extinction, its teeth are revealing some answers.

What did ancient sharks eat?

There are tantalizing clues about the diet of ancient sharks in the fossil record.

The shape and structure of their teeth can indicate general eating styles. Broad serrated megalodon teeth are thought to be particularly well adapted to gnawing on marine mammals, while the sharp and pointy teeth of other sharks lend themselves to piercing and tearing fish.

In some exceptional cases, fossil marine mammal bones have been found with the bite marks of a megalodon. Some sperm whale bones have evidence of megalodon attacks on their foreheads, a part of the whale that would have been rich in fats. Dolphin tailbones have also been found with deep megalodon tooth marks. Each of these incredible fossils offers a snapshot of one megalodon’s meal on one day millions of years ago. 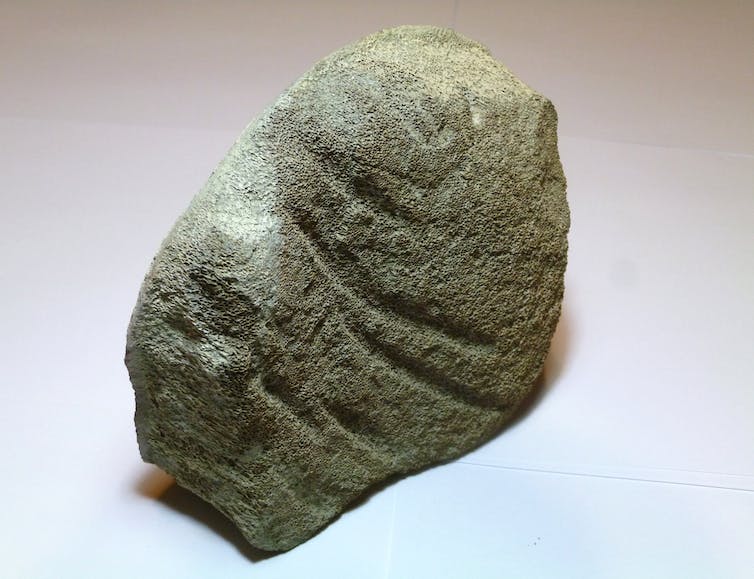 This whale vertebra was bitten in half by a megalodon.Jayson Kowinsky via Wikimedia, CC BY

Were marine mammals a part of megalodon’s regular diet, or just a special snack that day? And what else may have fallen prey to this massive shark?

Finding answers in the chemistry of fossil teeth

Using newly developed tools, we have been able to analyze the chemical composition of these fossil teeth, including samples from the United States, western Europe and Japan.

The results, published in two recent studies, tell us about the diet of each ancient shark and about the environment it lived in long before humans walked the Earth. 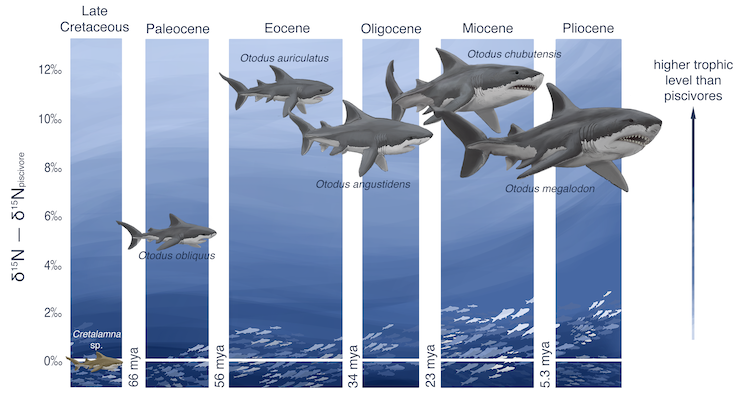 When megalodon and its megatooth ancestors lived, and their position in the food web as apex predators compared with sharks that primarily eat fish. Christina Spence Morgan

Very small amounts of nitrogen and zinc are preserved deep inside the mineral layers of fossil teeth. We can extract and purify these elements from the teeth, measure the isotope ratios, and then estimate the position in the food web, for each ancient shark.

While nitrogen isotopes are often measured in modern protein tissues, these decompose rapidly and cannot be measured in the fossil record. This new method of measuring nitrogen isotopes can analyze the trace amount of nitrogen preserved in the mineral layers of fossil teeth over millions of years. The zinc isotope method is also new; this study marks the first time it has been applied to sharks and fossils more than 86,000 years old.

Understanding the diet of the megalodon can help us unravel the mystery of its extinction, and the possible ripple effects of its disappearance on marine ecology.

Both measurements show that the megalodon – and its slightly smaller megatooth ancestors – were feeding at an extraordinarily high position in ancient food webs. In fact, at least according to the nitrogen isotopes, they may have been higher than any apex predator existing today.

To be in such a high position they may have been eating now-extinct marine mammals, such as predatory sperm whales. Megalodon might also have been cannibalistic, maybe with larger adults eating juveniles. It’s very likely that the megalodon was a true apex predator, not targeted as prey by any other marine animal. 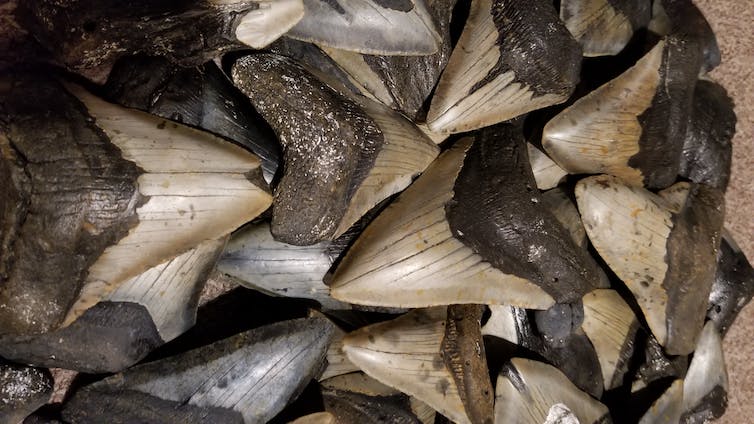 Megalodon was here. Several of the shark’s giant teeth have been found along the North Carolina coast.Harry Maisch

The emergence of the modern white shark around 5 million years ago has been hypothesized as one factor that could have contributed to megalodon’s extinction.

White sharks were believed to have fed on similar prey. There are similarities in tooth shape, and fossil bite marks on similar species also suggest that the white sharks may have outcompeted megalodon, or outcompeted juvenile megalodon.

The isotopes offer conflicting answers. The comparison of nitrogen isotopes between great whites and megalodon from around the same time period placed these predators at different positions in the food web, meaning that they were not competing for the same prey. The zinc isotopes, however, do not reject the competition hypothesis, placing these two sharks at similar positions in the food web instead.

The disappearance of the giant sharks could have been caused by other factors, too, such as temperature changes, the loss of shelf environments due to sea-level fall, or, likely, a combination of influences.

Future research combining both methods may help resolve this conundrum and finally solve the mystery of why the largest shark on Earth vanished.

Michael Griffiths of William Paterson University and Kenshu Shimada of DePaul University contributed to this article.