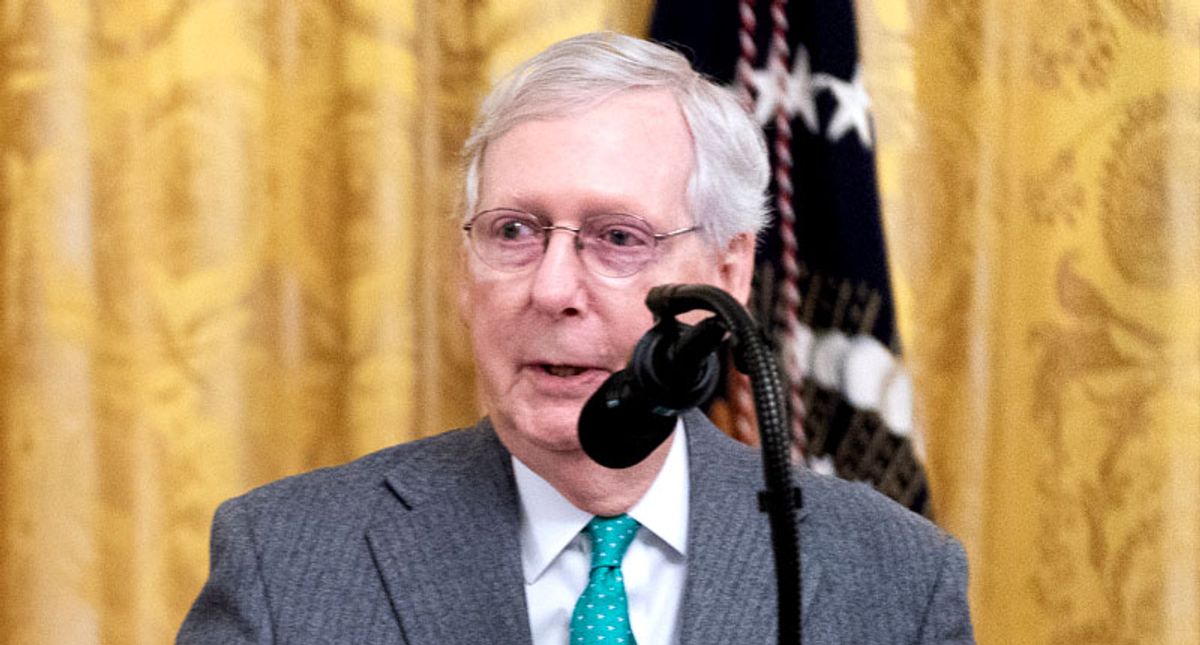 Meanwhile, the Republican State Central Committee of Kentucky met on Saturday to vote on a resolution demanding that Minority Leader Mitch McConnell support former President Donald Trump and condemn his second impeachment. The resolution failed on procedural grounds but the people who brought it up say they plan to bring another motion demanding McConnell's resignation. There is no chance that will pass either. Mitch McConnell is the most powerful Republican in the federal government and the Kentucky political establishment knows that. But both of these events reveal that Trump loyalty remains a potent force in the party.

It also illustrates the bind that Mitch McConnell finds himself in.

Polling shows that a large majority of Republicans are still in thrall to Trump to be sure, but somewhere between one-fifth and one-fourth of the party has fallen away. A Pew poll taken after the insurrection found that more than 30% of Republicans disapprove of Trump. That may not seem like much but it is enough to make it impossible for Republicans to win nationally if those people fall away from the GOP permanently. As the Atlantic's Ron Brownstein put it, "if Biden could lastingly attract even a significant fraction of the Republican voters dismayed over the riot, it would constitute a seismic change in the political balance of power."

Nobody knows that better than Mitch McConnell who just lost four Senate seats in Arizona and Georgia, states that were solid red not long ago. Those kind of wins are predictable in purple states like Colorado (which the Republicans also lost) but losing four seats in Arizona and Georga is a harbinger of big problems for the GOP in metro and suburban areas around the country. And after what happened on Jan. 6th, Trump and his agitated, radical following are very likely to make things even worse. In that Pew Poll, 43% of Republicans said they do not want Trump to remain a major political figure.

It has long been obvious that Mitch McConnell doesn't care for Donald Trump. He's a big pain in the neck if nothing else and McConnell understands that a leader who can never get above 50% approval is not someone they can count on to deliver for the party. In fact, Trump never did. He barely pulled out an electoral college win in 2016, lost in 2020 and lost both the House and the Senate during his only term. It's not a good record.

McConnell gave a strong speech condemning the move to object to the electoral votes before the riot started on Jan. 6th, even making the point that the election was "not unusually close." And after the attack, he floated several trial balloons in the mainstream press to test out the appetite for convicting Trump in a second impeachment trial. He's made it clear that his senators are free to vote their conscience and even gave a speech on the floor saying "the mob was fed lies. They were provoked by the President and other powerful people."

But before we get too excited about this born again, patriotic Mitch McConnell, let's not forget that he declined to step up and say that the election was decided until very late in the game and then held back from his criticism until the Georgia runoff elections were over, just in case he got to keep the majority. He, along with all the other GOP leaders, allowed Trump's Big Lie to spread and metastasize into a massive conspiracy theory that led hundreds of people to storm the Capitol. And for four years, knowing what Trump was didn't stop McConnell from using the power he had while he had it. Just because Trump was driving the party into the ditch was no reason not to confirm a whole bunch of right-wing judges and pass some huge tax cuts, am I right? He even went out of his way to make sure that Trump stayed in office when the Democrats conveniently offered him a way to get rid of him and replace him with good old, reliable right-wing Mike Pence. McConnell made that deal with the devil and he's scrambling to figure out what to do about old Beelzebub now that he's on the outside looking in.

Democrats must face the lasting damage of Trump's coup attempt.

McConnell isn't the only member of the GOP leadership who is dancing as fast as he can either.

House Minority Leader Kevin McCarthy, one of the most verbally incontinent politicians in Washington, doesn't know which way to turn either. At first, he said Trump won the election and he voted to overturn the electoral college, then turned around and said Trump bears some responsibility for the insurrection, then reversed himself and said Trump didn't provoke it and finally laid the blame at the feet of all Americans.

The 10 House Republicans who voted to impeach Trump are being threatened including Liz Cheney who is in danger of losing her leadership role in the caucus. The House Republicans are all at McCarthy's, and each other's, throats.

And nobody knows what they're going to do about the Senate impeachment trial. Some Republicans would like to draw it out and make it a Trumpian spectacle, while McConnell would prefer not to have Trump back in the spotlight. And now there may even be some jockeying for power within the Senate leadership:

McConnell has plenty of tricks up his sleeves and it's unlikely Cornyn is actually maneuvering. But it's been years since they had this much tension within their caucus and he may not be able to control his fractious bunch of Trumpish radicals like Josh Hawley, R-Mo, Ted Cruz, R-Tx, and Lindsey Graham, R-SC, who is strangely obsessed with defending Trump far beyond what is politically useful. I hope the Democrats are prepared to battle a party that's in disarray. It may not be as easy as it seems.