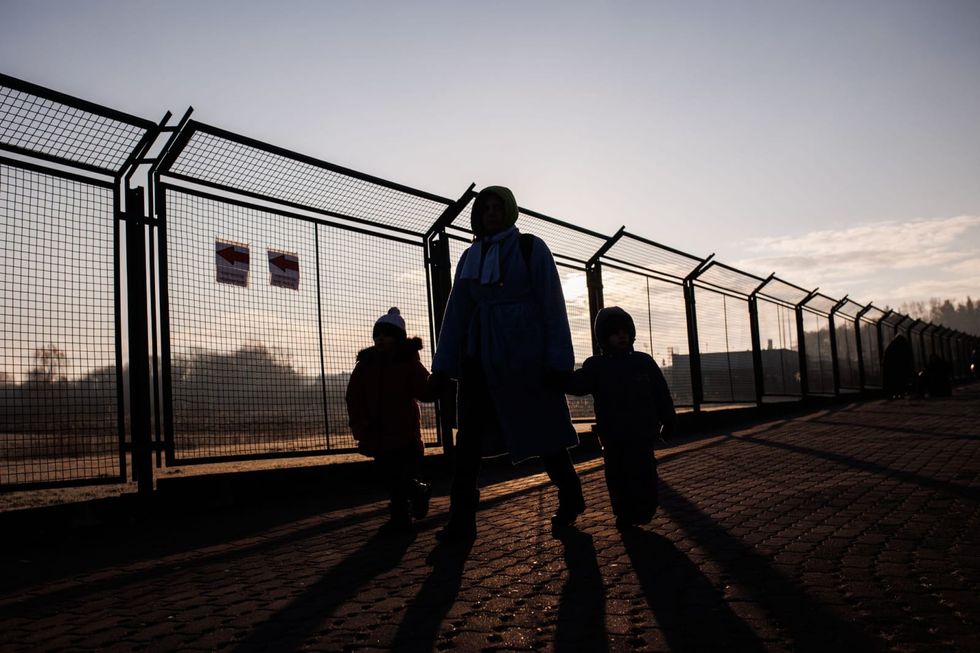 The number of people fleeing war in Ukraine has surged to over half a million, while a scandal was brewing at the border with Poland over the alleged racist treatment of African refugees.

More than 500,000 people have fled the war in Ukraine to neighbouring countries, according to the UN High Commissioner for Refugees, Filippo Grandi.

This was around 80,000 more than the figure reported on Sunday by the UN Refugee Agency (UNHCR).

The majority of Ukrainian refugees have so far fled to Poland, with over 281,000 arriving since the war broke out, according to the Polish border guard. On Sunday alone, almost 100,000 people are said to have crossed the shared border into Poland.

UNHCR spokesperson Chris Melzer added that hundreds of thousands of others have been displaced within Ukraine, but was unable to give a concrete figure.

As people continued to flee, some Africans said they had faced racism and discrimination at the border between Poland and Ukraine.

Some Africans said officials rudely stopped them from crossing the border for days, despite the cold and their lack of food or other supplies, even as they let white refugees enter the country.

Social media users were outraged by some of the videos shared, with one clearly showing a Ukrainian border guard vehicle.

Thousands of young African students are studying in Ukraine, mostly from Nigeria, Ghana, Kenya, South Africa, Ethiopia, Somalia and other countries, drawn by the high standard of education and low costs.

Nigerian Foreign Minister Geoffrey Onyeama called on his Ukrainian counterpart to clarify the situation. He said he had "expressed concern at the news of Ukrainian border guards hindering the exit of Nigerian citizens."

Ukrainian Foreign Minister Dmytro Kuleba "asserted that Ukrainian border guards have been instructed to allow all foreigners to leave. He promised to investigate and revert quickly," Onyeama tweeted.

South African students and other Africans were badly treated at the border between Ukraine and Poland, South African Foreign Minister Clayson Monyela also tweeted on Sunday.

However, Ghanaian Foreign Minister Shirley Ayorkor Botchwey said students from Ghana had not had any problems leaving the country, in a statement released on Monday.

She said 38 of the 220 Ghanaians who had left Ukraine so far had crossed the Polish border without any problems. However, more than 460 people are still on their way out of Ukraine to neighbouring countries.

On Monday, Polish officials denied the accusations and a spokesperson called the social media reports "nonsense" in response to dpa's query.

"The officers of the Polish Border Guard help all people fleeing the war zone in Ukraine. Nationality or citizenship do not matter," she said.

People of several dozen different nationalities were being processed at the border every day, including citizens of countries outside the Schengen zone, from Africa and Asia, she said.

Her comments came a day after the Polish Interior Ministry said those fleeing conflict need not register at a reception centre or other formalities.

Fewer people fleeing the conflict have so far reached Germany but 1,800 have so far arrived, according to the Interior Ministry. Most are from Ukraine, security sources said, but some are foreign students from other countries.

The authorities are currently preparing to dispatch aid, a ministry spokesperson said, with aid also to be provided to Ukraine's neighbouring countries.

"Ukraine itself has offered many people protection from war and persecution in recent years, for example from Syria, Chechnya and Somalia," the refugee organization said.

Furthermore, Afghans evacuated from Kabul and students from all over the world are also in Ukraine.

"The bombs make no differentiation as far as nationality or skin colour is concerned, and just as little differentiation should be made at the borders," said Karl Kopp, who heads Pro Asyl's Europe section.