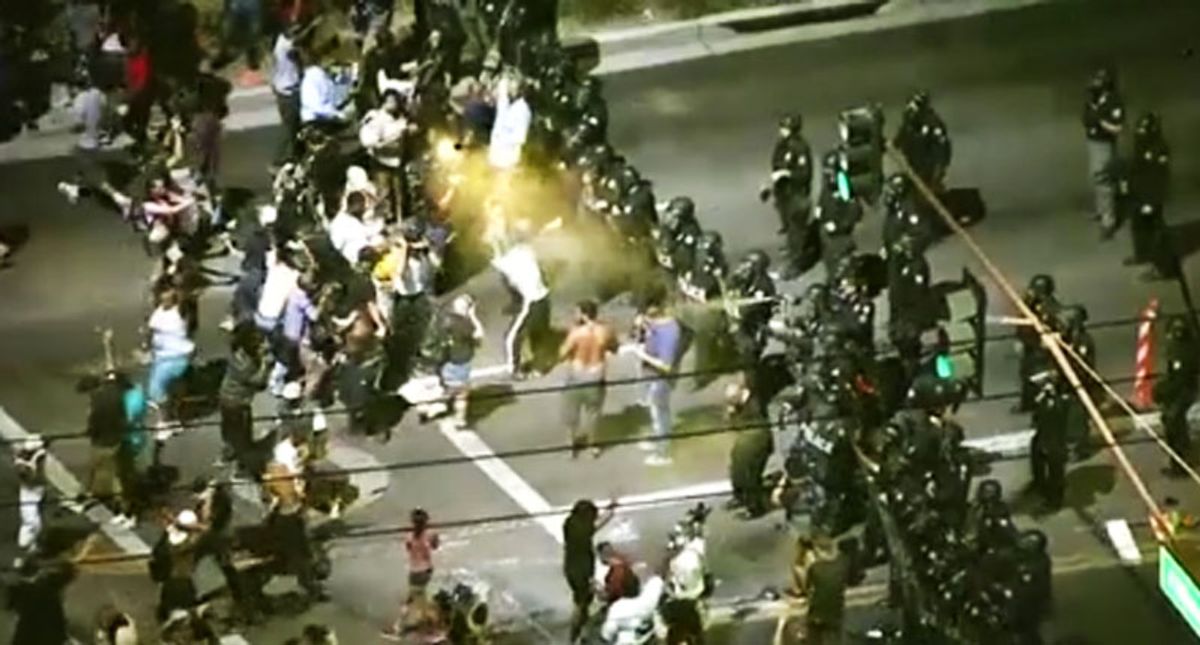 While most demonstrations in general were not attacked by police, officers used tear gas, rubber bullets, beatings with batons, and other violence against protesters at 511 left-wing events as opposed to just 33 right-wing ones since April 2020, according to ACLED data.


The Guardian analyzed ACLED statistics and determined that 4.7% of protests organized by leftist groups were subjected to police use of force, while only 1.4% of demonstrations by right-wing groups saw police violence.

Ironically—or intentionally, according to some critics—people protesting police violence were much more likely to be subjected to that very violence, and the use of force disparity only widened in relation to peaceful demonstrations. The analysis revealed that police were 3.5 times more likely to attack people at left-wing protests where no violence, vandalism, or looting occurred than at similarly peaceful right-wing actions.

Left-wing protests analyzed include mostly Black Lives Matter, but also actions by Abolish ICE, Democratic Socialists of America, and the NAACP. Right-wing demonstrations include Blue Lives Matter, the QAnon and "Stop the Steal" conspiracy theories, and protests against Covid-19-related public health restrictions over the past year.

Unsurprisingly, left-wing activists were not surprised by the report, with reactions on social media ranging from feigned shock to "water is wet"-type comments. Human rights attorney Qasim Rashid called the report "a surprise to no one paying attention."

Not only have police attacked peaceful Indigenous, racial justice, economic justice, and other protesters in recent years, in some cases state and local law enforcement officers have actively worked with neo-Nazi factions and other far-right groups to target antiracism demonstrators. The FBI has also repeatedly reported a significant white supremacist presence among U.S. law enforcement agencies. Journalists and innocent bystanders have also been brutally attacked by police at or near leftwing demonstrations.

Most recently, commentators have noted the stark difference between the largely hands-off police treatment of the right-wing insurrectionist mob that perpetrated the deadly January 6, 2021 invasion of the U.S. Capitol—which killed one police officer—and the brutal law enforcement attacks on peaceful protesters in Washington, D.C. last summer that followed the killings of Black people including George Floyd, Breonna Taylor, Ahmaud Arbery, Tony McDade, and others.