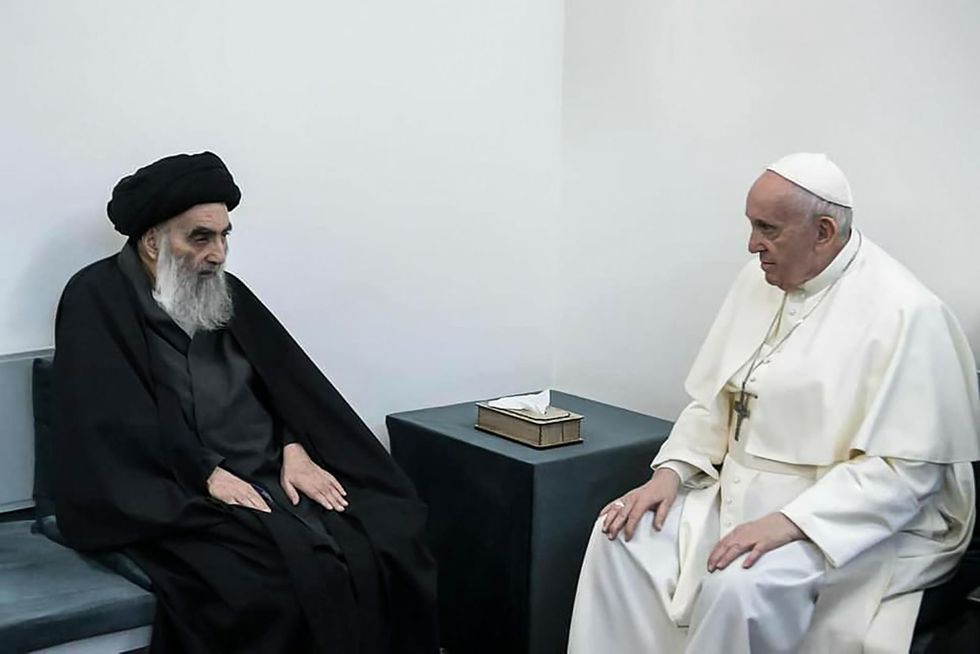 The meeting at al-Sistani's home in the holy city of Najaf delivers a message of peaceful coexistence, as Iraq's Christian minority has dwindled in the country in recent years, displaced by war.

During the 45-minute talk, the pope stressed the importance of cooperation and friendship between religious communities for the good of Iraq, the region and the whole human family, according to a statement by the Vatican press office.

The pope thanked al-Sistani for speaking up – together with the Shiite community – in defence of those who are most vulnerable and persecuted amid the violence and hardships of recent years, and for affirming the sacredness of human life and the importance of the unity of the Iraqi people.

A statement issued by al-Sistani's office said the meeting tackled the challenges facing humanity and the role of faith in overcoming them.

Al-Sistani spoke about "injustice, poverty, lack of social justice, religious and intellectual persecution, as well as wars, violence, economic blockades and forced displacement suffered by several peoples in our region, particularly the Palestinian people in the occupied lands,” according to the statement.

The cleric pointed to the role religious leaders can play to end these tragedies, it added.

He stressed that he hopes for Christian citizens in Iraq to live in safety and security and enjoy all their constitutional rights.

He pointed to the religious authority's role in protecting them from injustice, particularly during the time in which Islamic State terrorists were in control of large swathes of Iraq.

There were once more than 1 million Christians in Iraq, but now their population is estimated to be between 250,000 and 400,000 after years of war, religious persecution and a steep economic decline.

The pope's visit had been awaited with great excitement, and children waving Iraqi and Vatican flags lined Rasool Street leading to the venue of the meeting.

However, all of the shops along the street were closed and curfew measures were being enforced. Large numbers of security forces were deployed in the streets of Najaf.

The meeting was to be followed by an interfaith prayer in Ur, which is mentioned in the Bible as the home of the prophet Abraham, the father of the three monolithic faiths of Judaism, Christianity and Islam.

On Friday, Francis called for an end to violence and extremism at the start of his visit to the Middle Eastern country.

The 84-year-old pontiff defied the global pandemic and security concerns after a series of recent attacks in Iraq to make his first foreign trip in more than a year.

On Sunday, Francis is to travel to the northern autonomous Kurdistan region before heading to Mosul and Qaraqosh, where he will pray for the victims of the conflict with Islamic State, which seized large areas of northern Iraq in 2014, killing and displacing thousands.

Fulton County district attorney Fani Willis argued the arrangement was “rife with serious ethical problems” and “actual conflicts of interest" in a new court filing seeking to disqualify two lawyers who are being paid by the state GOP, which she said undercuts their ability to do what's in the best interest of each of their clients, reported Yahoo News.