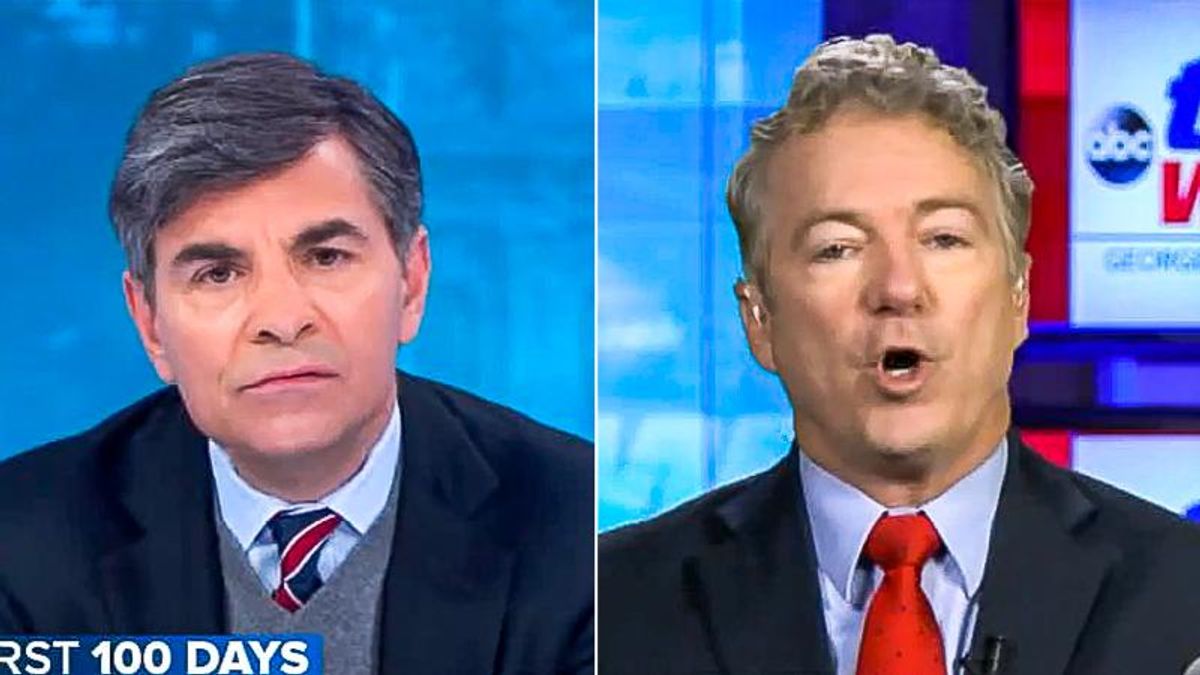 "This election was not stolen," ABC host George Stephanopoulos began his interview with Paul by noting. "Do you accept that fact?"

Paul, however, refused to respond with a straight answer.

"The debate over whether or not there's fraud should occur," Paul opined. "But, yes, were there people who voted twice? Were there dead people, illegal aliens who voted? Yes. And we should get to the bottom of it."

"I have to stop you there," Stephanopoulos said. "No election is perfect. But there were 86 challenges, they were filed by President Trump and his allies in court. All dismissed."

Paul tried to interrupt but the ABC host continued.

"There were counts and recounts," Stephanopoulos continued. "The Department of Justice, led by William Barr, said there's no widespread evidence of fraud. Can't you just say the words: This election was not stolen?"

"Well, 75% of Republicans agree with you because they were fed a big lie by President Trump and his supporters who say the election was stolen," Stephanopoulos pressed. "Why can't you say it was a fair election?"

"I think you make a mistake," Paul interrupted. "Hey, George, George, where you make a mistake is that people coming from the liberal side like you, you immediate say everything's a lie instead of saying there are two sides to everything. Historically what would happen is if I said I thought there was fraud, you would introduce someone else who said there wasn't. But now you insert yourself in the middle and say that the absolute fact is that everything I'm saying is a lie."

"I said what the president said was he said was a lie!" Stephanopoulos pushed back. "Hold on a second! He said the election was stolen. This election was not stolen. The results were certified in every single state after counts and recounts!"

"You're saying there was not fraud and it's all been investigated," Paul complained. "And that's just not true."

"That's not what I said, sir," the ABC host asserted. "I said the Department of Justice found no evidence."

"You said it's all a lie!" Paul shouted.

"You say we are all liars!" Paul insisted. "You're just simply saying we're all liars."

"I said it was a lie that the election was stolen," Stephanopoulos affirmed.

Watch the entire interview below from ABC.