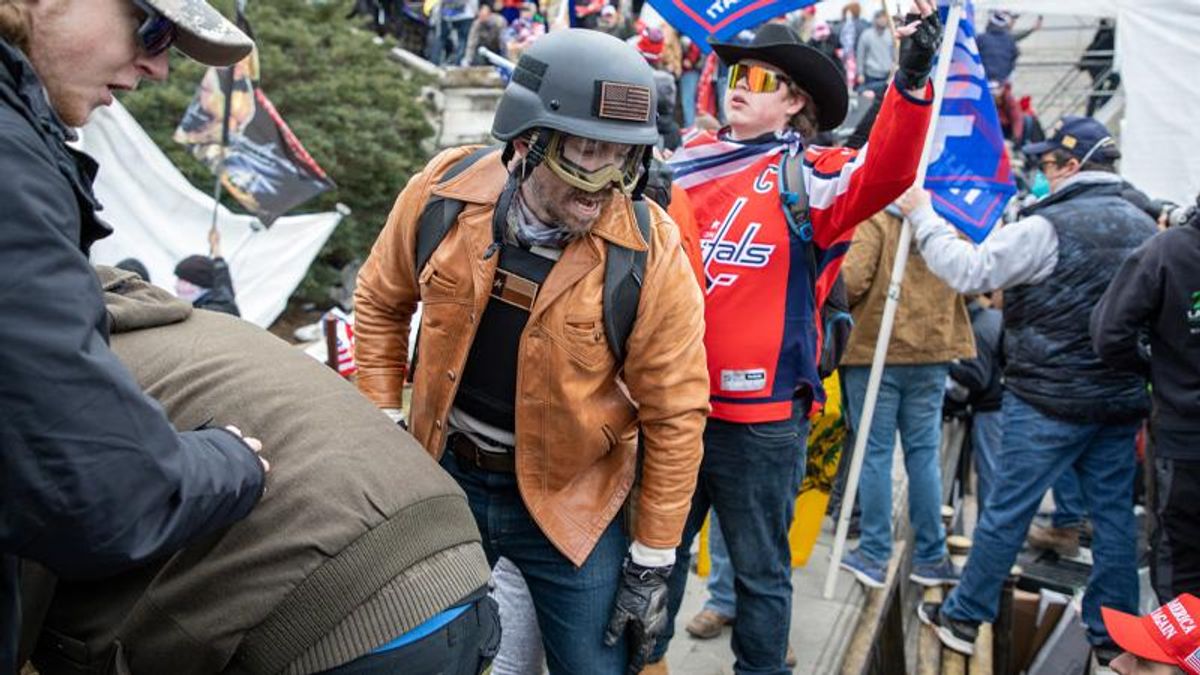 Bade was just doing her job, but she drew a ton of fire. Her "analysis" was precisely the kind that drives everyone crazy—everyone, that is, who is not a total nihilist about the power and promise of American politics. Among the many replies to Bade's tweet, my favorite came from writer and media maven Parker Molloy. "Oh, come on. I know that it's your job to treat politics like sports, but just … for once, can you not? I honestly wouldn't be able to sleep at night if this was what I was putting out into the world."

Bade's critics are correct about the Washington press corps' double standard. While the GOP is expected to act in bloodless self-interest, the Democrats are expected to act selflessly. If they act like partisans, the conventional wisdom tells us, the Republicans have the advantage. So now, when the Republicans accuse the panel in concert of being "Pelosi's partisan pageantry," the accusation will allegedly carry some weight. This presumption, which holds the parties to diametric standards, which actually does give the Republicans the advantage, without the press corps being aware of it, or if it is, it denies having any such effect—this presumption drives people like me up a wall.

For the sake of argument, however, let's accept Bade's silly analysis as true. Let's say that the House select committee is indeed partisan on account of the congressional Republicans saying it is. From this perspective, it would be interesting to think about what partisanship means after Tuesday's testimony by four police officers who were on the front-lines of what each of them described as a battle against more than 9,000 angry and armed insurgents prepared to "stop the steal." It was a battle fought between what Maryland Congressman Jamie Raskin called "heroes of the republic" and "fascist traitors." "Partisanship" therefore must take on a new meaning bigger than it normally does, as a word for the parties and their interests. The cops did not begin as partisans. But in the context of Donald Trump's attempted coup d'etat they became partisans. They were unwilling partisans, to be sure. But partisans all the same. The attempted overthrow of the republic made them partisans for the republic.

The conventional wisdom about both parties is right about one thing. The Democrats, especially moderate Democrats, value the public appearance of being "above the fray." There are many reasons for this, most of them mostly good, but this preference takes on greater significance amid an investigation into the sacking and looting of the United States Capitol. The Democrats must get to the bottom of what happened. Justice, democracy and the love of our country demand it. But they have an interest in appearing principled, not partisan in the way that word normally implies. They don't want to appear as if they are merely relitigating the 2020 presidential election. They do want to appear as if they're standing up for freedom, democracy and the country itself.

This balancing act is normally healthy. We do not live in normal times, though. If what it takes to hold power is for the Republicans to attack the character of the police officers who risked life and limb to protect everyone, including GOP lawmakers, so be it. If what it takes to hold power is to disgracefully appear indifferent to their suffering, so be it. They may be "heroes" from the point of view of Americans with a stake in being "above the fray." But they were "traitors" from the point of view of Donald Trump. They were in fact damned if they did, damned if they didn't. The same can be said for all Americans. The cops swore an oath to put country over party. They honored themselves and the rest of us by living up to it. Make no mistake, though. The moment they honored that sworn oath was the same moment they became partisans.

If a majority of Americans continues to see partisanship as the mere difference between the Republicans and the Democrats, I'd say the Republicans have as good a chance as any in getting a majority of Americans to see the January 6 investigation as merely "Pelosi's partisan pageantry." But I don't think a majority of Americans is going to continue seeing partisanship as the mere difference between the parties. The Republicans won't let that happen. They'll push and push, and they'll keep pushing so hard that even people who'd normally be on their side, like law enforcement officers, have said out loud that they feel betrayed by the party, betrayed enough to say fine. If I'm a partisan, I'm going to be a partisan you'll live to regret—a partisan for America.

Tuesday's testimony, in fact, seemed to suggest the Republicans had finally politicized what it means to be an American such that being an American is now a controversy with two sides. As I said, "one side is for democracy. One side is against it. One is for the Constitution and the principles it enshrines. One is for the GOP and its fuhrer. One side honors duty and sacrifice. One side belittles them. One side sees selfishness, disloyalty and betrayal as fair game. One side has unvarnished contempt for treason."

If partisanship means party over country, then Speaker of the House Nancy Pelosi probably did give House Minority Leader Kevin McCarthy "a gift" when she spiked the appointments of Jim Jordan and Jim Banks to the House select committee investigating the day a sitting president sent paramilitaries to the US Congress.

But if partisanship means country over party, Pelosi did no such thing. It would mean that Kevin McCarthy himself made a grave error. He chose not to have anything to do with it. He chose to smear the committee from the sidelines as "a political sham." But the more you allege partisanship against people trying hard to honor principle, the more people trying hard to honor principle are going to think of themselves as principled partisans—partisans for the United States and everything it stands for. I don't think the Republicans quite understand they are digging their own grave.