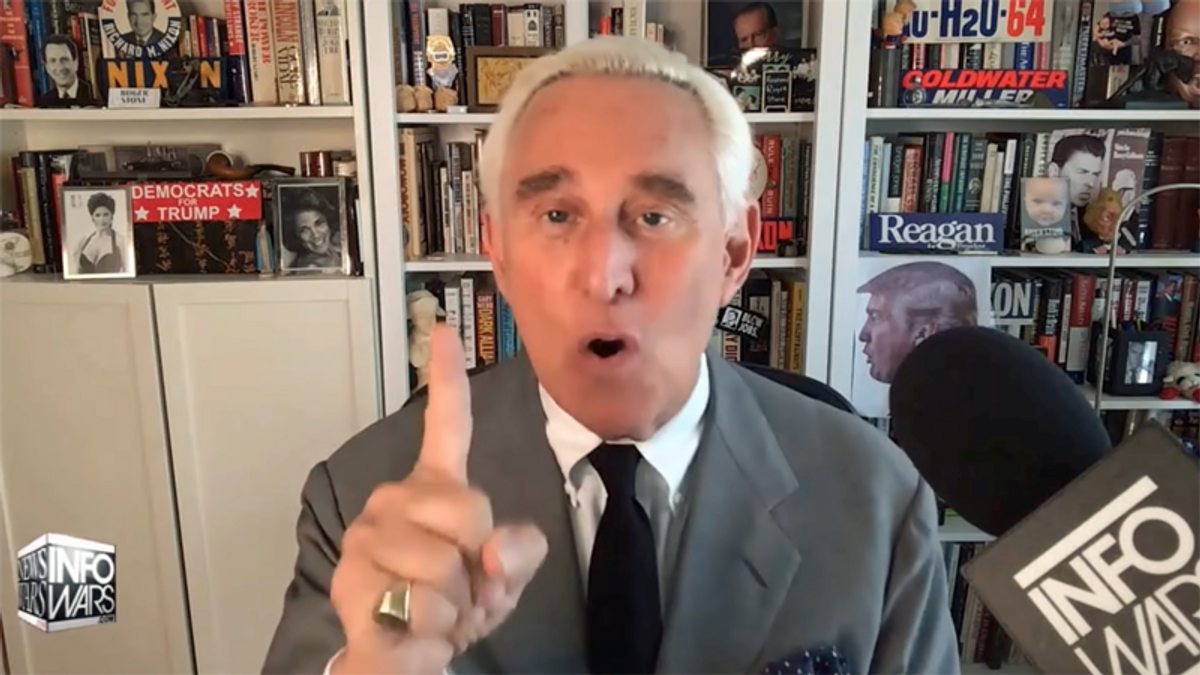 Longtime Republican operative and informal Trump advisor Roger Stone predicted Friday that a criminal indictment of Donald Trump is inevitable — though he maintains that the myriad investigations into Trump's alleged criminal activity are a "witch hunt."

Stone made the claims in an appearance on the far-right, conspiracy-driven outlet "InfoWars," during a wide-ranging conversation with host Alex Jones.

"I would be shocked if they did not come forward with a fabricated indictment for bank fraud or tax fraud against the former president [Donald Trump] by Manhattan District Attorney Cyrus Vance Jr.," Stone began, before claiming he will take the mantle of "establish[ing] this is a partisan witch hunt" on his new podcast.

Stone continued by arguing the "fabricated" Trump indictment would most likely be filled around the same time the baseless Arizona 2020 election audit concludes.

"Let's be very clear. In other words, as you said it earlier, you show the man, and I'll show you the crime. They're allowed to root through this man's business record of forty years, in which he built a real estate empire second to none, combing for a crime, they have no evidence of a crime, they no probable cause," Stone declared. "It is disgraceful, but I do think it is going to happen."

"And don't be surprised if the announcement comes at the exact time that we learn the truth about Maricopa County, Arizona. Don't be surprised because I see that coming," the self-proclaimed "dirty-trickster" added.

Jones speculated that the indictment will break "on or around July 4, to really rub it into our faces as a declaration of their takeover, the Chinese takeover of America." Stone then seemingly concurred with Jones' remark by further arguing that calls for continued 2020 election audits are "bubbling up."

This past week, the Manhattan district attorney's office convened a grand jury panel that will decide whether or not criminal charges will be brought against Trump, executives of the Trump Organization, and possibly the organization itself. Unlike Stone, former Trump attorney Michael Cohen said on MSNBC the charges could have real teeth, citing "significant exposure."

"But it wasn't just the Trump Organization. It was Donald's personal accounts. It was the kids' business accounts, presidential inaugural committee, campaign. Any penny that had anything to do with Donald Trump went through Allen Weisselberg's desk," Cohen said. "I do believe that he has significant exposure, and I think his exposure is not one that you can just hide because the beautiful thing about numbers is numbers don't lie."

Watch below, via InfoWars: