The Conversation
Police officers set up to push protesters to disperse during a protest by using tear gas on West Florissant Road in Ferguson (AFP)
The Research Brief is a short take about interesting academic work.

Sheriffs in counties that get more military surplus equipment from a federal program have a better chance of getting reelected than sheriffs whose counties get less equipment, or less lethal equipment, from the same program, our new research shows.

Through a federal program aimed at fighting drug trafficking and terrorism and improving border security, thousands of law enforcement agencies around the country have gotten billions of dollars' worth of military equipment, including bulletproof vests, helicopters, robots, firearms and ammunition, and armored vehicles.

We found that military transfers increase the sheriff's reelection likelihood. For instance, transferring equipment of total value of US$188,579 to a county that actually received no equipment made it, statistically, 8% more likely that the sheriff would be reelected.

The effect is strongest for sheriffs in counties that received lethal equipment such as weapons and armed vehicles. Sheriffs whose counties' departments got nonlethal equipment, such as high-end cameras or office supplies, got less of a boost to their reelection efforts. Sheriffs in less populated counties got bigger boosts from military surplus than sheriffs in more populated counties, where perhaps their political or organizational significance is less visible.

Sheriffs are often reelected with large margins. But our analysis found that in close elections, the amount of military equipment received by a county may have made the difference in who won.

This could add insight into why sheriffs in 2017 eagerly supported loosening restrictions on the transfers of tracked armored vehicles; weaponized aircraft, vessel and vehicles; heavy caliber firearms and ammunition; bayonets and grenade launchers; and camouflage uniforms out of military hands and into police arsenals.

It could also help the public understand how and why American police have become more militarized in recent years and how that has affected the way police behave.

And more generally, our work provides quantitative evidence on a little-studied corner of local politics, which is itself not studied a great deal. 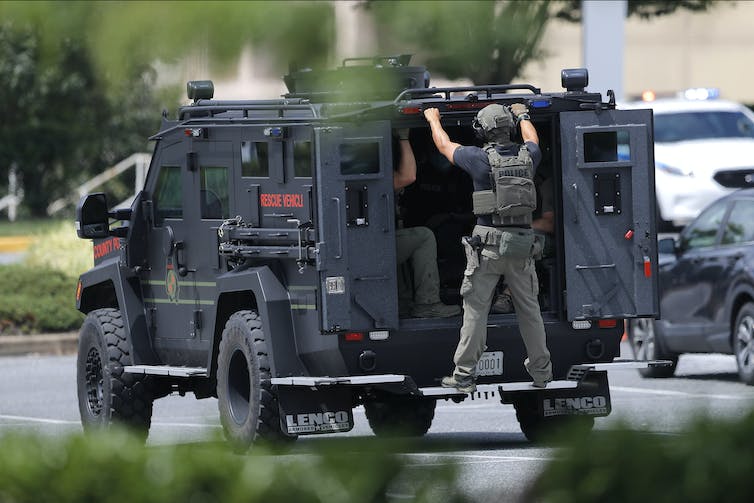 Baltimore County, Maryland, is one of many counties in the U.S. where local law enforcement agencies have received military surplus equipment.

Our data does not allow us to confidently pinpoint exactly what is behind this connection between military surplus equipment and sheriff reelection.

It might be possible, for instance, that voters appreciate living in “militarized" counties. This would contradict recent studies showing that militarization decreases citizens' perception of the police. Research could help identify why voters in militarized counties appear to reward sheriffs at the electoral booth.

Better understanding of voting behavior in local elections could help us more clearly interpret this result. Not all voters make a choice in every race on their ballots. Perhaps some people – the ones who disapprove of militarization and violent tactics – have chosen not to vote on sheriff's races.

That could leave the sheriff's race to be determined by those who do choose to vote for a candidate, potentially delivering a result that differs from the overall views of voters in the county.

Research could help reveal what causes people to cast ballots in specific races – and who chooses to abstain.