Somber mood as Taliban are back at Friday prayers 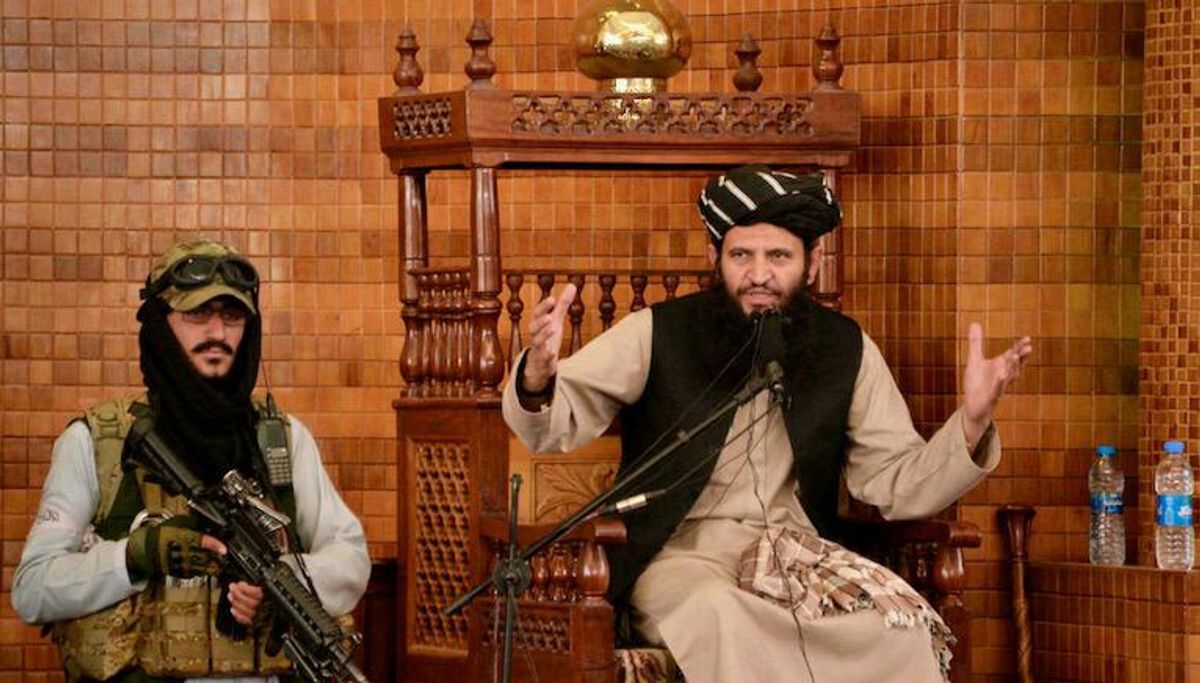 Flanked by gunmen, the scholar rallied the faithful at the Abdul Rahman Mosque with stories of Afghan victories Hoshang Hashimi AFP

Gunmen flanked an Islamic scholar as he delivered a fiery speech Friday to a packed Kabul mosque at the most important prayers of the week -- the first since the Taliban seized power in Afghanistan five days ago.

The preacher rallied the faithful at the Abdul Rahman Mosque with a history lesson on how Afghans had beaten the British empire, the Soviet Union and now the United States on the battlefield.

"Afghans have once again shown collective pride," he said, adding "Afghans by nature are a brave nation".

Sermons at Friday prayers are usually coordinated by the government to deliver thinly veiled or overt political messages on national unity and other topics.

Following the Taliban's return to power last weekend, Friday's prayers were closely scrutinised for any message the hardline Islamist movement was trying to impart.

The Taliban have been trying to project a softer image compared to the reputation they earned during their first incarnation that ended in 2001.

Then, shops, schools, government offices and even traffic came to a halt for Friday prayers -- and anyone tardy as the muezzin called the faithful risked a lashing across the back of the legs.

The gunmen flanking the scholar at Abdul Rahman mosque Friday cut imposing figures as the congregation knelt on the floor -- some men fidgeting with rosary beads.

Several other attendees filmed the proceedings with their mobile phones.

At mosques across the capital the overarching theme appeared to be an appeal for Afghans to give the new regime a chance: instead of fleeing the country, help rebuild it, was the message.

Hundreds attended the Hazarat Mostafa mosque in the western suburbs of Kabul where the local Imam made no mention of the Taliban and focused mostly on traditional Koranic verses. He did, however, touch briefly on the tragic scenes at the airport -- where thousands are desperately trying to enter in the hope of getting an evacuation flight out.

"Those with weak faith are running after or hanging from American planes. They should stay and build their country," the Imam said.

The United States has flown in thousands of troops to Kabul's airport in a desperate effort to evacuate Afghans who worked for US interests during the 20-year occupation that was due to end by August 31.

One attendee at Hazarat Mostafa mosque noted many present were starting to grow beards -- which the Taliban insisted all men did two decades ago.

"There were some Taliban among the crowd, but they were quiet and peaceful," he said.

The Taliban insist they will continue to rule according to Islamic principles, but just how strictly they are interpreted remains to be seen.

"Let us see what happens," said shopkeeper Wahid at a smaller mosque elsewhere in the city.