As with weeds in a garden, it is a challenge to fully get rid of cancer cells in the body once they arise. They have a relentless need to continuously expand, even when they are significantly cut back by therapy or surgery. Even a few cancer cells can give rise to new colonies that will eventually outgrow their borders and deplete their local resources. They also tend to wander into places where they are not welcome, creating metastatic colonies at distant sites that can be even more difficult to detect and eliminate.

One explanation for why cancer cells can withstand such inhospitable environments and growing conditions is an old adage: What doesn’t kill them makes them stronger.

At the very earliest stage of tumor formation, even before cancer can be diagnosed, individual cancer cells typically find themselves in an environment lacking nutrients, oxygen or adhesive proteins that help them attach to an area of the body to grow. While most cancer cells will quickly die when faced with such inhospitable conditions, a small percentage can adapt and gain the ability to initiate a tumor colony that will eventually become malignant disease.

We are researchers studying how these microenvironmental stresses affect tumor initiation and progression. In our new study, we found that the harsh microenvironments of the body can push certain cancer cells to overcome the stress of being isolated and make them more adept at initiating and forming new tumor colonies. Moreover, these cancer cells may adapt even better in the inhospitable and stressful conditions they encounter while trying to establish metastases in other areas of the body or after they are challenged by treatment with chemotherapy or surgery.

The microenvironment of a cell can significantly influence its function.

We focused on pancreatic cancer, one of the most lethal cancers and one that is notoriously resistant to chemotherapy and often not curable with surgery. Almost 90% of pancreatic patients will succumb to cancer recurrence or metastasis within five years after diagnosis.

We wanted to study how tumor formation is affected by what we call “isolation stress, when cells are deprived of nutrients or oxygen supply because of poor blood vessel formation or because they cannot benefit from making contact with nearby cancer cells. To study how cancer cells respond to these situations, we recreated different forms of isolation stress in cell cultures, in mice and in patient samples by depriving them of oxygen and nutrients or by exposing them to chemotherapeutic drugs. We then measured which genes were turned on or off in pancreatic cancer cells.

We found that pancreatic cancer cells challenged with conditions that mimic isolation stress gain a new receptor on their surface that unstressed cancer cells don’t typically have: lysophosphatidic acid receptor 4, or LPAR4, a protein involved in tumor progression. 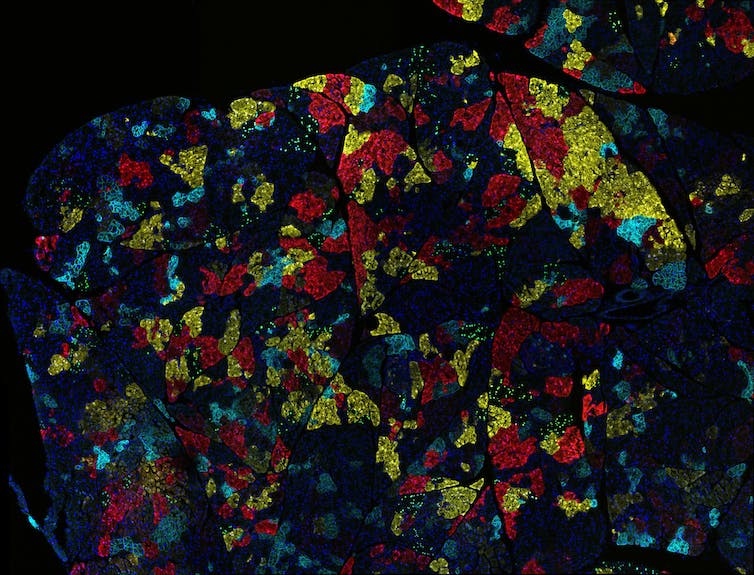 How does LPAR4 help build tumors?

We also found that LPAR4 helps cancer cells achieve tumor initiation by giving them the ability to produce a web of macromolecules, or an extracellular matrix network, that provides them an adhesive foothold within an otherwise inhospitable environment. By producing a halo of their own matrix, cancer cells with LPAR4 can start building their own tumor-supporting niche that provides a refuge from isolation stresses.

We determined that a key component of this extracellular matrix is fibronectin. When this protein binds to receptors called integrins on the surface of cells, it triggers a cascade of events that results in the expression of new genes promoting tumor initiation, stress tolerance and cancer progression. Eventually, other cancer cells are recruited into the fibronectin-rich matrix network, and a new satellite tumor colony starts to form.

Considering that tumor cells with LPAR4 can create their own tumor-supporting matrix on the fly, this suggests that LPAR4 may allow individual tumor cells to overcome isolation stress conditions and survive in the bloodstream, the lymphatic system involved in immune responses or distant organs as metastases.

Importantly, we found that isolation stress is not the only way to trigger LPAR4. Exposing pancreatic cancer cells to chemotherapy drugs, which are designed to impose stress upon cancer cells, also triggers an increase of LPAR4 on cancer cells. This finding might explain how such tumor cells could develop drug resistance.

Understanding how to cut off the cascade of events that allows cancer cells to become stress-tolerant is important, because it provides a new area to explore for future treatments.

Our team is currently considering potential strategies to prevent cancer cells from utilizing the fibronectin matrix to gain stress tolerance, including drugs that can target the receptors that bind to fibronectin on the surface of tumor cells. One of these drugs, being developed by a company one of us co-founded, is poised to enter clinical trials soon. Other strategies include preventing cancer cells from gaining LPAR4 when they sense stress, or interfering with the signals that promote the generation of the fibronectin matrix.

For patients diagnosed with pancreatic cancer, there is a pressing need to discover how to improve the effectiveness of surgery or chemotherapy. Like combating weeds in your garden, this may require attacking the problem from multiple directions at once.