The Conversation
Photo by Diane Picchiottino on Unsplash

A recently proposed aquaculture octopus farm in the Canary Islands would raise 3,000 tonnes of octopus a year, which means almost 275,000 individual octopuses will be killed annually.

My research examines animal minds and ethics, and to me, the phrase “octopus culture” brings to mind Octopolis and Octlantis, two communities of wild octopuses in Jarvis Bay, Australia.

In Octopolis, numerous octopuses share — and fight over — a few square metres of seabed. In these watery towns, octopuses form dominance hierarchies, and they’ve started developing new behaviours: male octopuses fight over territory and, perhaps, females by throwing debris at one another and boxing.

The discovery of octopus communities came as a surprise to biologists who have long described octopuses as solitary animals that interact with others in three specific contexts: hunting, avoiding being hunted and mating.

What Octopolis suggests can happen in the wild is what has also been observed in captive octopuses: when living in an overly dense captive environment, octopuses will form dominance hierarchies.

In their fights for power, male octopuses perform an array of antagonistic behaviours, including throwing scallop shells to defend their den, and the “mantle up” display which makes an octopus look like a menacing vampire. Submissive octopuses signal their compliance with light colours and flattened body postures. For their efforts, the dominants appear to gain better access to high-quality dens and to females.

A look into the social life of octopus by Australian philosopher Peter Godfrey-Smith.

What is going on in Octopolis and Octlantis is properly called octopus culture. The idea of animal culture emerged after scientists noticed that in some groups, animals perform actions that aren’t seen in other groups of the same species.

One of the earliest proponents of animal cultures was the Japanese primatologist Kinji Imanishi who in the 1950s observed that a group of Japanese macaques on Koshima Island would wash sweet potatoes in the water before eating them.

This was a new behaviour, not seen in other macaque groups, and observers were lucky enough to observe its origins. A monkey named Imo was the first to wash a potato in the salty water and others soon copied her, leading to a community-wide behaviour pattern.

The idea of animal culture drove much subsequent Japanese primatology, but in Europe and North America culture didn’t get much attention until 1999, when an article about culture in chimpanzees was published. Since then, evidence of culture — group-typical behaviours that are socially learned — has been found all across the animal kingdom, including among fish, birds and insects. 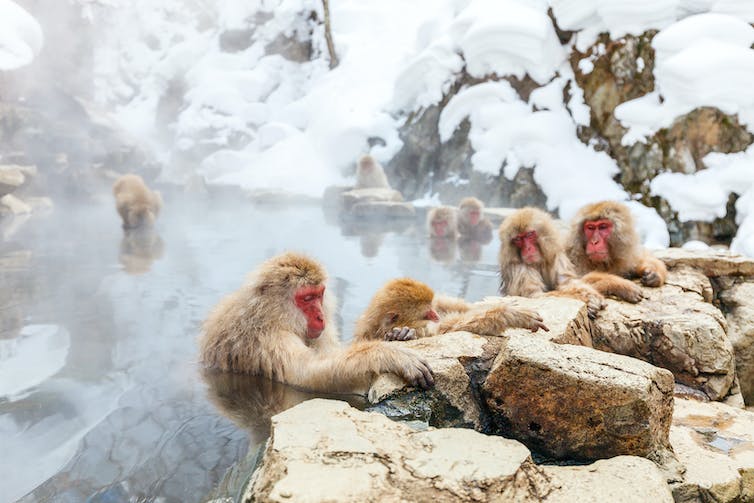 Japanese macaques exhibited social behaviour and influenced a cultural approach to primatology that later extended to other macaques.

A new kind of octopus

Our familiar farmed animals — like Angus cows and Chocktaw hogs — have been domesticated and are entirely different from the animals they evolved from.

Many of our domesticated animals cannot survive without human care. Examples include domestic rabbits, that have evolved without the instincts and colouring wild rabbits have to protect them from predators, sheep whose wool grows too thick without regular trimming and chickens bred for meat that can’t walk as adults because their breasts are too heavy.

Starting an octopus farm is a commitment to creating a new kind of animal that relies on humans for their existence. It isn’t an idea to be taken up lightly, or a project that can responsibly be attempted and then discarded when it turns out to be too difficult or not profitable.

There are many reasons to worry that an octopus farm will not be easy to manage. Unlike other farmed animals, octopuses need their space. Octopolis is already a battleground of boxing octopuses; one can only wonder what that will look like on a scale of thousands.

Octopuses are sentient — they are emotional animals that feel pain. A recent report commissioned by the department for Environment, Food & Rural Affairs in the United Kingdom reviewed the scientific evidence for pain experience in cephalopod molluscs (octopuses, squid and cuttlefish).

Sentient animals used for food are protected under welfare laws and killed in ways that should minimize their pain. Current methods of slaughtering octopuses include clubbing, slicing open the brain or suffocating them. The report’s authors conclude that none of these methods of slaughter are humane and recommends against octopus farming.

Octopuses are escape artists. The kind of housing needed to shelter them will be difficult to achieve, especially while also providing enrichment, since an enriched environment will be one full of possible getaway routes. 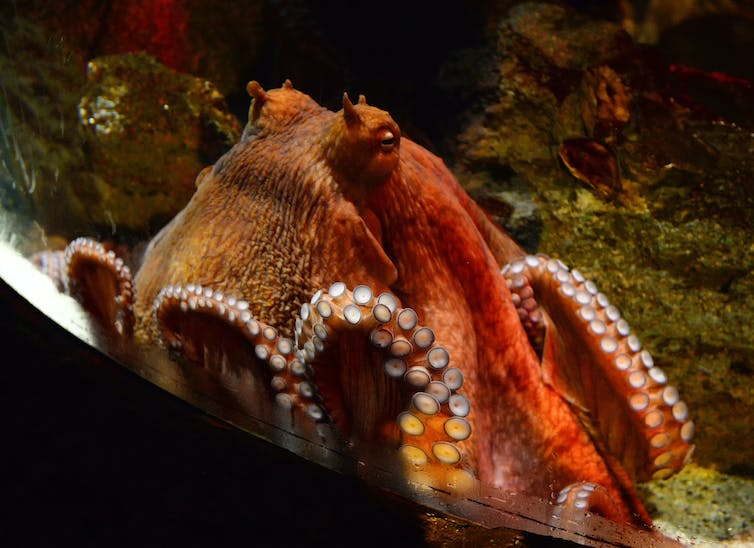 Octopus are known for their ability to escape tanks.

If an octopus farm is started, and then abandoned, the thousands of domesticated cultural octopuses cannot be released into the sea and be expected to flourish. We learned from the many expensive attempts to release Keiko, the killer whale that starred in the Free Willy franchise, that successful reintroduction of captive cultural animals into the wild is not easy. Even after spending US$20 million dollars, Keiko died in captivity.

The proposal to bring thousands of animals together into an octopus megacity would scale octopus culture far beyond anything found in nature or in captivity. It would create hundreds of thousands of Keikos, aquatic cultural animals captured from the wild and brought into captivity. And it would force them to live together and create a new culture in what is sure to be a violent octopus slum.

Just now, we are learning that octopuses feel emotions and have culture, and we are starting to rethink current practices of intensive animal farming.

It is exactly the wrong moment to propose such a scheme. We now know better.