The Conversation
images.theconversation.com
During the anti-lockdown protests at parliament last year, I was told about a 15-year-old who stopped to ask someone why they were crying. The person replied they were Jewish and had been upset by Nazi imagery used by some protesters, including swastikas chalked on the ground.

Water bottle in hand, they set about washing these off, until a well-dressed, middle-aged woman threatened to kill them and parliamentary security ushered them away.

The local Jewish community sounded a warning about the “grotesque and deeply hurtful” appropriation of the Holocaust by protesters that, as the situation in Wellington suggests, went unheeded.

The current occupation of parliament grounds has also seen disturbing references to Nazism and the Holocaust. These have been variously deployed to call for the execution of journalists and politicians, invoke the Nuremberg Code and compare vaccine mandates to the Nazi persecution of the Jews.

Not only do such comparisons rest on false equivalences, absurd leaps of logic and historical anachronism, they are also tactics that tap into long histories of exploitation of the Holocaust for political ends.

A history of appropriation

Twenty years ago, American historian Peter Novick surveyed the causes (left and right) that since the 1970s had sought legitimacy and impact by comparing themselves to the Holocaust. These included:

Since then, the trend has grown and the list become even more diverse. Social media and the active dissemination of conspiracy theories have made it global. Holocaust references were used to condemn both Donald Trump’s immigration laws and Barack Obama’s Affordable Care Act.

Comparisons to Nazi genocidal policies have also cropped up wherever assisted dying legislation has been debated, with opponents claiming such policies would be akin to Nazi “euthanasia”.

As well as being inaccurate, that argument also perpetuates the criminal Nazi deception that hid racist mass murder under the euphemism of “euthanasia”. 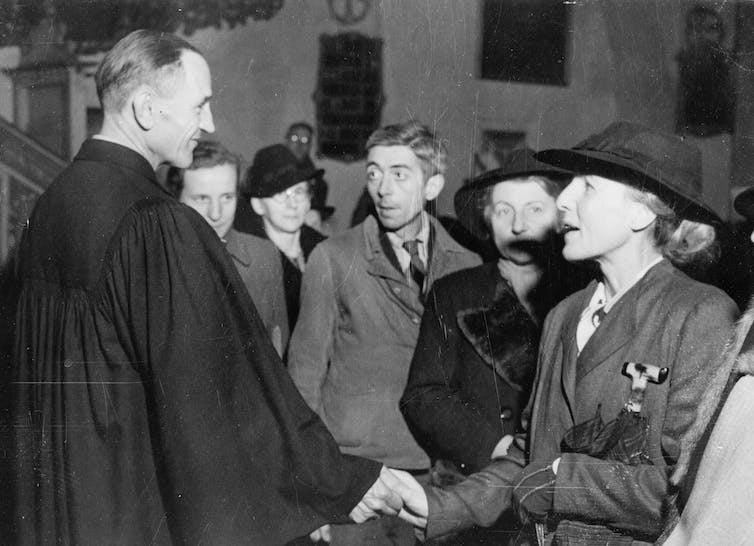 Anti-Nazi pastor Martin Niemöller at his first service after being released from imprisonment following the allied occupation of Germany in 1945.

First they came for …

In this charged context, anti-Nazi pastor Martin Niemöller’s oft-cited quote about apathy in the face of threat – “First they came for the socialists, and I did not speak out…” – has emerged as a favourite meme.

Niemöller had initially welcomed Hitler’s rise to power but was later incarcerated in Dachau in 1937. Visiting the camp after the war, he was struck by a sign reading: “Here in the years 1933-1945, 238,756 people were cremated.”

While his wife was shocked by the number of victims, Niemöller was horrified by the dates: where had he been between 1933 and 1937? From that experience came the famous lines lamenting German conformism and indifference that had allowed Hitler’s rise.

Niemöller never wrote them down as a poem, but would open his speeches with them, amending the groups of victims depending on his audience (as indeed do the many memorials where his words are now engraved).

Now, inevitably, the US alt-right’s “First they came for the unvaccinated…” reverberates around anti-vax conference venues and the online forums of “freedom convoys”, alongside imagery featuring yellow stars and striped pyjamas.

These threaten to become the rallying cries of those with no experience of genuine dictatorships, lack of freedom or persecution, yet who share forums with neo-Nazis and anti-Semites – including in New Zealand. 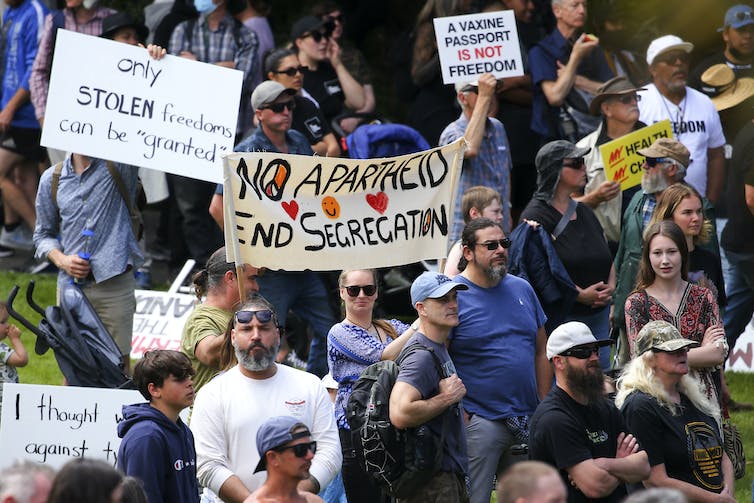 A ‘Freedom and Rights Coalition’ protest at parliament on November 9 2021.

Reading ourselves and our times into history is a reasonably common phenomenon and easily done. After all, what was the Nazi party in its early days other than a tiny minority of disgruntled and disaffected “ordinary” people, coalesced around economic grievances and a general sense of moral and cultural malaise?

And while some historical analogies might be wrong, they’re not always harmful. But to compare vaccine mandates to Nazism is both inaccurate and harmful. As is comparing the New Zealand government’s health response to South Africa’s apartheid regime.

Not only do such comparisons equate fundamentally different policies, they wilfully ignore the fact those historical persecutions discriminated against people for who they were, not for what they believed or how they chose to behave.

Media and other commentators sometimes play down exploitation of the Holocaust or Nazism, either to starve it of publicity or because it can seem less serious or threatening than other more overt forms of intimidation.

But we should also guard against complacency. Since the 2019 Christchurch terror attack, New Zealand has known firsthand that racist and intolerant discourse can lead to deadly violence.

Despite evidence of violent rhetoric and behaviour in Wellington, some have sought to reassure that most protesters were “ordinary Kiwis”.

Just what constitutes an “ordinary” Kiwi is open to speculation. But I’d prefer to think they’re like the compassionate teenager who took out a water bottle to help remove swastikas, not the protesters who tolerate or ignore them.