The Taliban militants of Afghanistan have grown richer and more powerful since their fundamentalist Islamic regime was toppled by U.S. forces in 2001.

In the fiscal year that ended in March 2020, the Taliban reportedly brought in US$1.6 billion, according to Mullah Yaqoob, son of the late Taliban spiritual leader Mullah Mohammad Omar, who revealed the Taliban's income sources in a confidential report commissioned by NATO and later obtained by Radio Free Europe/Radio Liberty.

In comparison, the Afghan government brought in $5.55 billion during the same period.

Who funds the Taliban?

I study the Taliban's finances as an economic policy analyst at the Center for Afghanistan Studies. Here's where their money comes from.

Afghanistan accounted for approximately 84% of global opium production over the five years ending in 2020, according to the United Nation's World Drug Report 2020.

Much of those illicit drug profits go to the Taliban, which manage opium in areas under their control. The group imposes a 10% tax on every link in the drug production chain, according to a 2008 report from the Afghanistan Research and Evaluation Unit, an independent research organization in Kabul. That includes the Afghan farmers who cultivate poppy, the main ingredient in opium, the labs that convert it into a drug and the traders who move the final product out of country. 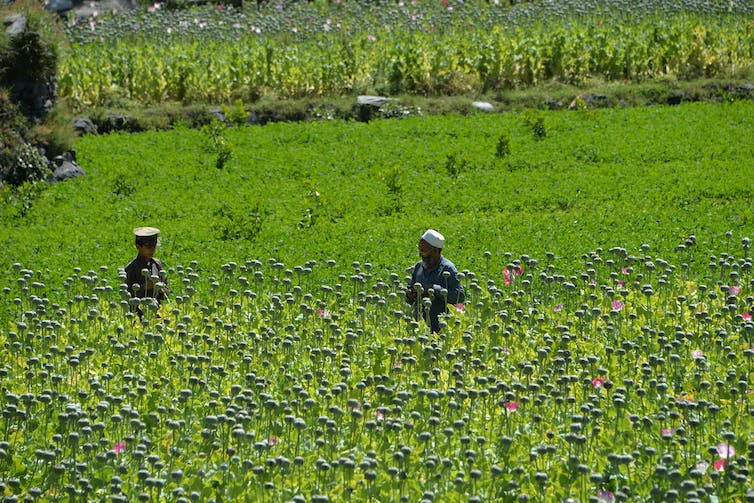 Afghan farmers harvest opium sap from a poppy field in the Darra-i-Nur District of Nangarhar province May 10.

Mining iron ore, marble, copper, gold, zinc and other metals and rare-earth minerals in mountainous Afghanistan is an increasingly lucrative business for the Taliban. Both small-scale mineral-extraction operations and big Afghan mining companies pay Taliban militants to allow them to keep their businesses running. Those who don't pay have faced death threats.

According to the Taliban's Stones and Mines Commission, or Da Dabaro Comisyoon, the group earns $400 million a year from mining. NATO estimates that figure higher, at $464 million – up from just $35 million in 2016.

Like a government, the Taliban tax people and industries in the growing swath of Afghanistan under their control. They even issue official receipts of tax payment.

“Taxed" industries include mining operations, media, telecommunications and development projects funded by international aid. Drivers are also charged for using highways in Taliban-controlled regions, and shopkeepers pay the Taliban for the right to do business.

The group also imposes a traditional Islamic form of taxation called “ushr" – which is a 10% tax on a farmer's harvest – and “zakat," a 2.5% wealth tax.

According to Mullah Yaqoob, tax revenues – which may also be considered extortion – bring in around $160 million annually.

Since some of those taxed are poppy growers, there could be some financial overlap between tax revenue and drug revenue.

The Taliban receive covert financial contributions from private donors and international institutions across the globe.

Many Taliban donations are from charities and private trusts located in Persian Gulf countries, a region historically sympathetic to the group's religious insurgency. Those donations add up to about $150 million to $200 million each year, according to the Afghanistan Center for Research and Policy Studies. These charities are on the U.S. Treasury Department's list of groups that finance terrorism. 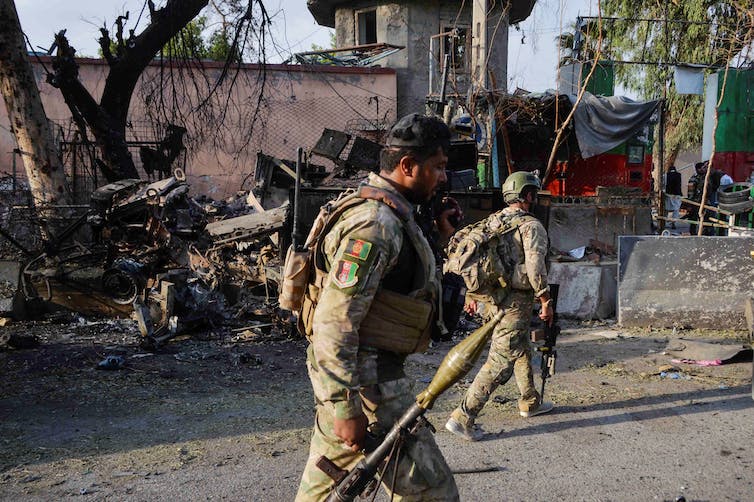 The Taliban's insurgency has destabilized Afghanistan for nearly 20 years.

The Taliban's net income from exports is thought to be around $240 million a year. This figure includes the export of poppy and looted minerals, so there may be financial overlap with drug revenue and mining revenue.

The Taliban own real estate in Afghanistan, Pakistan and potentially other countries, according to Mullah Yaqoob and the Pakistani TV Channel SAMAA. Yaqoob told NATO annual real estate revenue is around $80 million.

According to BBC reporting, a classified CIA report estimated in 2008 that the Taliban had received $106 million from foreign sources, in particular from the Gulf states.

Today, the governments of Russia, Iran, Pakistan and Saudi Arabia are all believed to bankroll the Taliban, according to numerous U.S. and international sources. Experts say these funds could amount to as much as $500 million a year, but it is difficult to put an exact figure on this income stream.

Who funds the Afghan government?

For nearly 20 years, the Taliban's great wealth has financed mayhem, destruction and death in Afghanistan. To battle its insurgency, the Afghan government also spends heavily on war, often at the expense of basic public services and economic development.

A peace agreement in Afghanistan would allow the government to redirect its scarce resources. The government might also see substantial new revenue flow in from legal sectors now dominated by the Taliban, such as mining.

Stability is additionally expected to attract foreign investment in the country, helping the government end its dependence on donors like the United States and the European Union.

There are many reasons to root for peace in war-scarred Afghanistan. Its financial health is one of them.

This article was published on Dec. 8, 2020. Hanif Sufizada recently wrote for The Conversation about his experience fleeing Afghanistan after the Taliban takeover.