'Back to the Cheney playbook': Fears of war grow as Trump administration plans to accuse Iran of ties to Al Qaeda 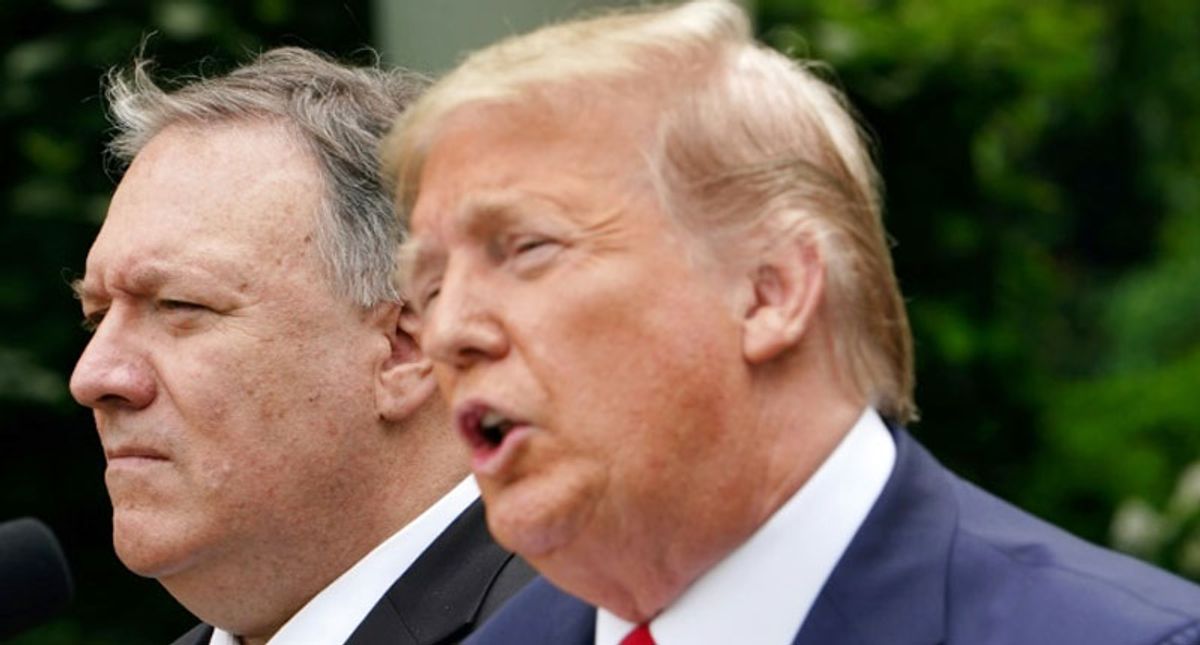 U.S. Secretary of State Mike Pompeo is reportedly planning to accuse Iran of links to Al Qaeda in a speech Tuesday, an allegation critics described as a rehashing of a Bush administration lie that served as part of the rationale for the catastrophic invasion of Iraq in 2003.

Reuters reported late Monday that Pompeo—a warhawk and an architect of the Trump administration's so-called "maximum pressure" strategy—"plans to use newly declassified U.S. intelligence on Tuesday to publicly accuse Iran of ties to Al Qaeda, two people familiar with the matter said, as part of his last-minute offensive against Tehran before handing over to the incoming Biden administration."

"With just eight days left in office for President Donald Trump, Pompeo is expected to offer details on allegations that Iran has given safe haven to Al Qaeda leaders and support for the group, the sources said, despite some skepticism within the intelligence community and Congress," according to Reuters. "It was not immediately clear how much Pompeo intends to reveal in his speech to the National Press Club in Washington."

Iranian officials have flatly rejected accusations that their country has harbored or provided support to Al Qaeda leaders. "From time to time, Iran's foes—the United States and Israel—try to shirk responsibility for the criminal acts of Al Qaeda and other terrorist groups in the region and link Iran to such outfits by lying and leaking false information to the media," Iranian Foreign Ministry spokesman Saeed Khatibzadeh said in November.

The Trump administration has repeatedly pushed the U.S. and Iran to the brink of war over the past four years by violating the nuclear accord, imposing punishing sanctions, assassinating Iran's top general, and baselessly accusing Iran of plotting attacks on American forces in the region.

Warnings that outgoing President Donald Trump—who last week incited a right-wing assault on the U.S. Capitol—could launch an attack on Iran on his way out the door have intensified in recent days as the president has grown increasingly unhinged in the wake of his election loss to President-elect Joe Biden, who has vowed to return the U.S. to compliance with the nuclear deal.

News of Pompeo's planned allegations heightened the fears of anti-war campaigners, with some comparing the secretary of state's narrative to Bush-era falsehoods about Saddam Hussein's supposed ties to Al Qaeda.

"Pompeo reportedly going back to the Cheney playbook tomorrow to try to sabotage diplomacy and lay the groundwork for war with Iran," tweeted Ryan Costello, policy director at the National Iranian American Council (NIAC). "Pompeo said he was preparing for a second Trump term ahead of his boss inspiring domestic terrorists to attack the peaceful transfer of power, so I'm pretty sure there are only a handful of people less convincing on the topic."

Fueling concerns about the intentions behind Pompeo's coming speech was news that the U.S. secretary of state met with Yossi Cohen, the head of Israel's spy agency, at a cafe in Washington, D.C. late Monday.

"I wouldn't put it past these lunatics to be plotting something evil at the 11th hour," said policy analyst Omar Baddar.

Pompeo's speech will come just two weeks after Mohammad Javad Zarif, Iran's top diplomat, warned that the Trump administration is attempting to "fabricate a pretext for war" during its final days in power.

"Can you imagine if Iran flew bomber jets over the Gulf of Mexico and called it a 'defensive move'?" Assal Rad, senior research fellow at NIAC, tweeted at the time.