Among the things included in the video were questions to Jared Kushner and Ivanka Trump about the draft of a speech that former President Donald Trump would give on Jan. 7 to help stave off his Cabinet secretaries from invoking the 25th Amendment to remove him from office.

The Jan. 6 committee asked several questions about the speech and what was crossed out by Trump, but Andrew Weissmann, a former prosecutor for ex-special counsel Robert Mueller, noticed something that was included.

"I immediately deployed the National Guard and federal law enforcement to secure the building and expel the intruders," the speech said. "America is, and must always be, a nation of law and order."

The statement is a lie. Trump never deployed the National Guard or law enforcement. 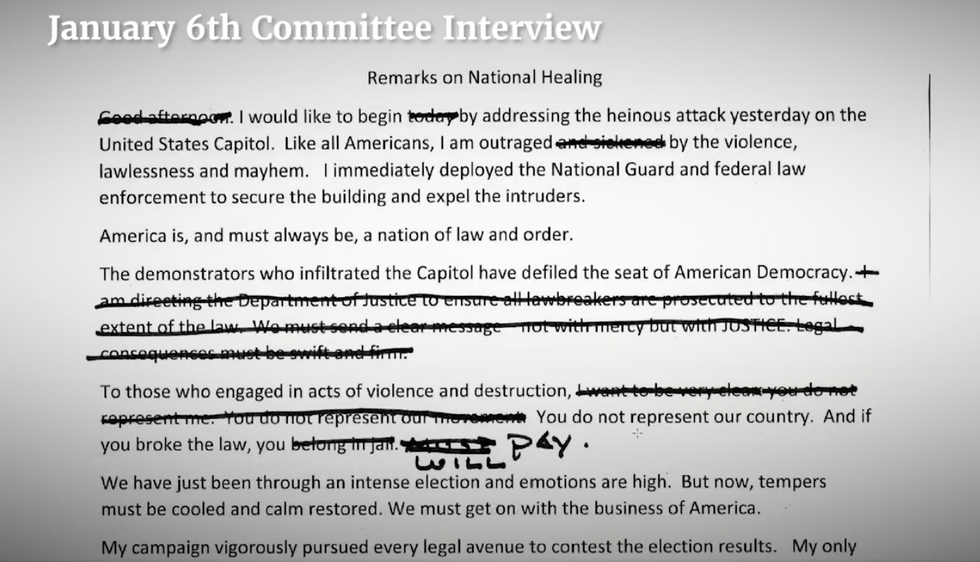 "One of the things I was struck by was not what was crossed out but something that was in there and that was the statement that 'I immediately deployed the National Guard and federal law enforcement to secure the building and expel the intruders,'" quoted Weissmann. "So, if I was the Justice Department right now I would view that as a cover-up that Jared Kushner, and Stephen Miller and the former president of the United States engaged in to make it seem like the president had not engaged in a coup and he actually was against what happened on Jan. 6th. And that was actually part of the planned speech. And that's the kind of thing that we want to see the department doing is interviewing those people and issuing grand jury subpoenas and if necessary putting those people in the grand jury and forcing them to testify and account for their actions."

He noted that if that was happening it would be well known by now because while lawyers and jurors must keep the proceeding secret, witnesses can speak out that they appeared before a grand jury.

"So I'm waiting to see that kind of aggressive action by the department," he continued.

He also quoted Punchbowl's Mike Schmidt, who described the DOJ as like a tank that is patient and slow and not a lot happens until they're aimed at the target. That's only when everything explodes.

"I hope that is right. I am somewhat pessimistic, although I do think the Jan. 6th committee has sort of lit a fire under the Department of Justice and that's why you're seeing the heartfelt statements by the attorney general," said Weissmann.

Last week, Attorney General Merrick Garland was short with some of the reporters asking if he was going to do anything about the obvious crimes that were being revealed from the Trump White House by the committee. All Garland would say is that no one is above the law.

"There is a lot of speculation on what the department is doing, what it's not doing, what our theories are and what they aren't, and there will continue to be speculation," said Garland. "That's because of the central tenet of the way in which the Justice Department investigates, a central tenet of the rule of law is that we do not do our investigations in public. This is the most wide-ranging investigation — and the most important investigation — that the Justice Department has ever entered into. And we have done so because this effort to upend a legitimate election, transferring power from one administration to another, cuts at the fundamentals of American democracy. We have to get this right. And for people who are concerned, as every American should be, about protecting democracy, we have to do two things: we have to hold accountable every person who is criminally responsible for trying to overturn a legitimate election, and we must do it in a way filled with integrity and professionalism, the way the Justice Department does elections. Both of these are necessary in order to achieve justice and to protect our democracy."

When pressed on it, specifically with the mention of Trump, Garland snapped at the reporter saying that he doesn't know how else to say it other than no person in the United States is ever above the law.

See the full discussion below and the video from the Jan. 6 committee. You can also watch at this link.

\u201cIt took more than 24 hours for President Trump to address the nation again after his Rose Garden video on January 6th in which he affectionately told his followers to go home in peace. \n\nThere were more things he was unwilling to say.\u201d
— Rep. Elaine Luria (@Rep. Elaine Luria) 1658757613