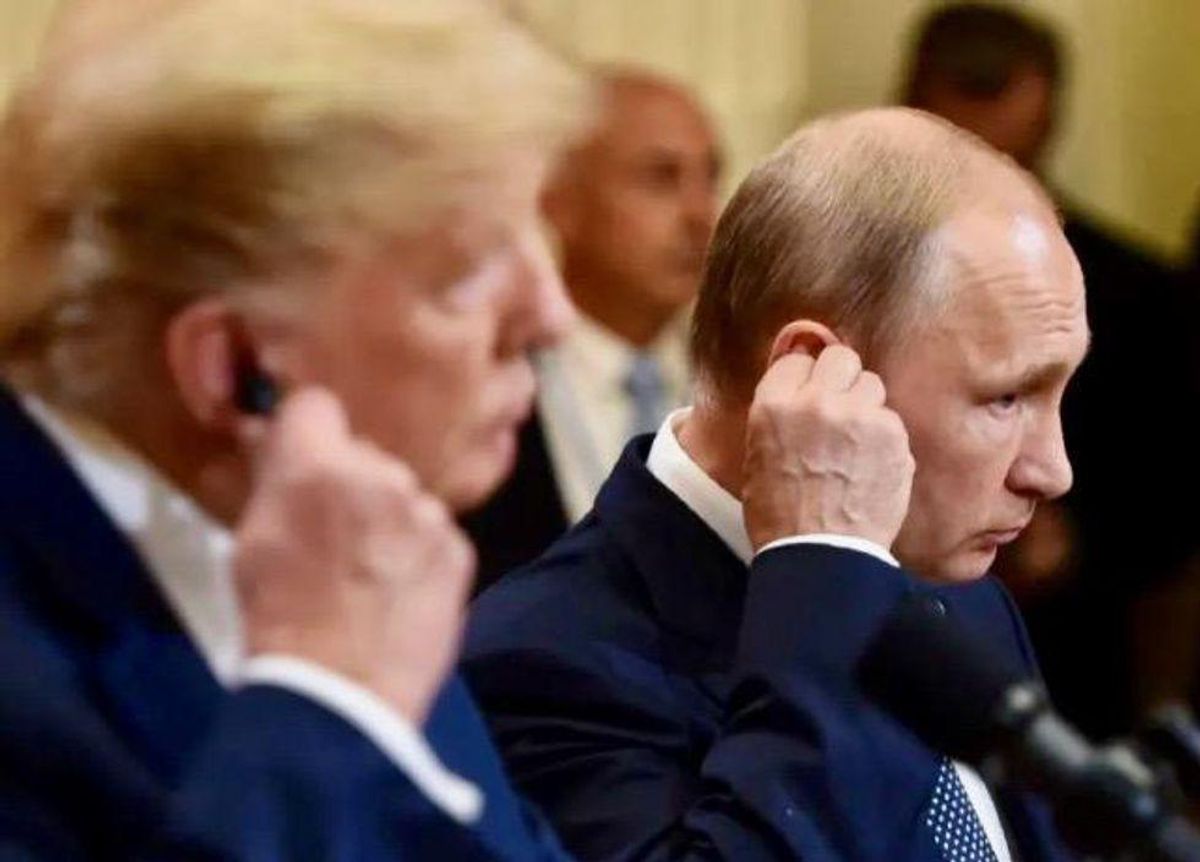 Joe Biden may be president, but in too many ways the Age of Trump marches on. American political and civic life continues to resemble a spy thriller, a horror movie or a science fiction dystopia that keeps spawning sequels. Most Americans want to escape the theater, but the doors are locked. Those who remain in their seats love these movies and can't get enough of their charismatic star.

The ending of this saga has been obvious since the beginning: Donald Trump is a malevolent force, with no loyalty to the United States and its people; yet his followers worship him as a god and nothing can tear them away from the cult.

Almost every day there are new plot twists. As reported last week, the highest-ranking officers and civilian leaders of the U.S. military were concerned that Trump might try to stage a military coup after his defeat in the 2020 presidential election. Gen. Mark Milley, chairman of the Joint Chiefs of Staff, considered a plan to resist such a move through mass resignations, a last-ditch effort to save democracy.

As detailed in Carol Leonnig and Philip Rucker's new book "I Alone Can Fix It," Trump became so enraged after losing to Joe Biden that some feared he would stage a "Reichstag fire" incident, in the mode of Adolf Hitler, that might allow him to seize absolute power. House Speaker Nancy Pelosi even asked Milley to ensure that Trump would not launch a nuclear attack and use the ensuing crisis as an excuse to suspend the Constitution and remain in power.

More "revelations" have followed: Last Thursday the Guardian reported that it had obtained classified documents from a 2016 meeting where the Russian government launched its secret campaign in support of Trump:

Vladimir Putin personally authorised a secret spy agency operation to support a "mentally unstable" Donald Trump in the 2016 US presidential election during a closed session of Russia's national security council, according to what are assessed to be leaked Kremlin documents.
The key meeting took place on 22 January 2016, the papers suggest, with the Russian president, his spy chiefs and senior ministers all present.
They agreed a Trump White House would help secure Moscow's strategic objectives, among them "social turmoil" in the US and a weakening of the American president's negotiating position.
Russia's three spy agencies were ordered to find practical ways to support Trump, in a decree appearing to bear Putin's signature.
Western intelligence agencies are understood to have been aware of the documents for some months and to have carefully examined them. The papers, seen by the Guardian, seem to represent a serious and highly unusual leak from within the Kremlin.
The Guardian has shown the documents to independent experts who say they appear to be genuine. Incidental details come across as accurate. The overall tone and thrust is said to be consistent with Kremlin security thinking.

At this purported Kremlin meeting, Putin and the Russian intelligence services concluded that Trump could be easily manipulated to serve Russia's strategic goals because he is an "impulsive, mentally unstable and unbalanced individual who suffers from an inferiority complex." This document concludes, "It is acutely necessary to use all possible force to facilitate [Trump's] election to the post of US president."

The Guardian further concludes that the Kremlin's internal report was likely the work of Vladimir Symonenko, a senior Kremlin official who "provides Putin with analytical material and reports, some of them based on foreign intelligence." He discussed various "American weaknesses" Russian agents could exploit, including "a 'deepening political gulf between left and right," the U.S. 'media-information' space, and an anti-establishment mood under President Barack Obama."

The Guardian report has been met with considerable skepticism, some of it from the usual suspects who continue to claim — despite an abundance of known and proven facts — that the scandal sometimes dubbed "Russiagate" was all a hoax, or at least grossly exaggerated. But it's also fair to say that some respected national security experts are suspicious about the timing of the Guardian story, and the authenticity and provenance of the documents in question.

In a recent conversation with journalist Ian Masters, Baer said that Donald Trump may indeed have served as a "useful idiot" on behalf of Russian interests, sent into the heart of American democracy as a "Trojan horse to cause problems." He suggests that Russian intelligence used the technique of "framing a guilty man" to muddy the waters around Trump and make him a more effective chaos agent.

Writing at Esquire, Charles Pierce explains how he reconciles concerns about the veracity of the Kremlin papers:

Are experts within the Western intelligence agencies divided about the authenticity of the documents, and did someone who believes them to be the smoking gun leak them in order to force the action? I'd certainly want to know more about their provenance than I do now.
Frankly, my impulse is to believe what The Guardian reported. The revelations certainly seem believable given some of the otherwise inexplicable actions of the previous president* and his administration*, and they also conform to the methods of ratfcking Russia has used in other democracies in Europe. (What up, Estonia?) And they also track with what we've learned recently about the former president*'s rabid-badger attempts to stay in power after he'd clearly lost the election — and, for that matter, his continued attempts to undermine confidence in this country's electoral system.
But my innate caution against leaping to conclusions based on leaks from intelligence services of any kind makes me cautious about this being a conclusive Eureka moment. Too many shadowy people have too many shadowy agendas for me to accept anything emerging from those shadows too readily. But there is one conclusion I will stand by, based on the Guardian story and its conformity to what a lot of us suspected was true about the previous president*: We simply have got to get rid of the Electoral College. Now.

Whatever one concludes about the authenticity of these Kremlin papers, one conclusion is obvious: Their observations about Donald Trump, and about the vulnerability of American society to disinformation and subversion, are correct.

Both Robert Mueller's report and the Senate Intelligence Committee's report on the 2016 election (the latter completed under Republican leadership) have conclusively shown that Russia interfered to help Donald Trump win as a way of advancing its strategic goals. Moreover, it is a matter of public record that Trump's inner circle included at least one Russian agent.

At almost every key juncture in his presidency, Trump made decisions that advanced Russia's interests to the disadvantage of the United States. In both public and private, he was strikingly submissive and deferential to Putin. Whether that reflects blackmail and control, or simply hero worship and admiration, is an unsettled question.

Even members of Trump's administration and Republican elected officials questioned his loyalty to the country, especially after the astonishing Helsinki summit of 2018.

In the end, Russia's strategy would prove to be brilliant: Trump left the White House with the U.S. a weakened world power, gripped by a plague that has killed at least 600,000 people, along with a neofascist insurgency that shows no signs of dying out. Right-wing terrorism and other violence is escalating, and the nation has become irreparably polarized by the increasing radicalism of Republicans and the right.

In recent weeks I have reflected a great deal on my 2019 conversation with the late Dr. Jerrold Post, the founding director of the CIA's Center for the Analysis of Personality and Political Behavior. In Post's long and distinguished career, he served as the CIA's head psychological profiler under five presidents of both political parties. He described Donald Trump this way:

If one were to subtract from the ranks of political leaders all those with significant narcissistic personality features, the ranks would be perilously impoverished. I see Donald Trump as representing the quintessential narcissist. Using that phrase, though, is not to make a diagnosis, but to say he has a preponderance of these traits. Someone such as Donald Trump with that trait has no capacity to empathize with others, no constraints of conscience. Donald Trump also demonstrates a paranoid orientation. Whenever anything goes wrong, there is someone to blame.
There is also unconstrained aggression. This is very important. Never apologize, never admit you're wrong. That is part of Donald Trump's political style. But negotiating foreign policy is different from negotiating how to buy a skyscraper. Donald Trump also shows through his behavior a deep underlying insecurity. His grandiosity aside, Donald Trump is extremely fragile, and that trait is associated with extreme sensitivity.

In the last chapter of my new book I quote one of my favorite poems, which is, "Do not go gentle into that good night, but rage, rage at the dying of the light." I do not believe that Donald Trump will go gentle into that good night. In a close election, there is a very real hazard in terms of both potential outcomes. Should Trump win, as he did in 2016, he will make it a much bigger win and talking about the fraudulent election support on the Democratic side. But should Trump lose narrowly, I think we can be assured that he will not concede early. Trump may not even recognize the legitimacy of the election.

How will the American people deal with these continuous "revelations" about Trump and his regime? To this point, the response seems to be impotent rage. Because Trump and his inner circle are almost entirely rich white men, they will face no serious punishment for their crimes and other wrongdoing. Many Americans feel justifiable rage about a system which has one set of rules and laws for the rich and powerful (who are white) and another set for everyone else.

America is not just experiencing a democracy crisis caused by the Trump movement and the Jim Crow Republicans. The problem goes much deeper: America's political and social institutions are experiencing a legitimacy crisis, in which Trumpism is one symptom of a much larger disease.

The American people must decide whether their rage can be turned to productive or regenerative possibilities, or whether they continue to live in a state of learned helplessness, shrugging their shoulders as even more of the Trump regime's crimes are revealed. On that decision rests the future of democracy.