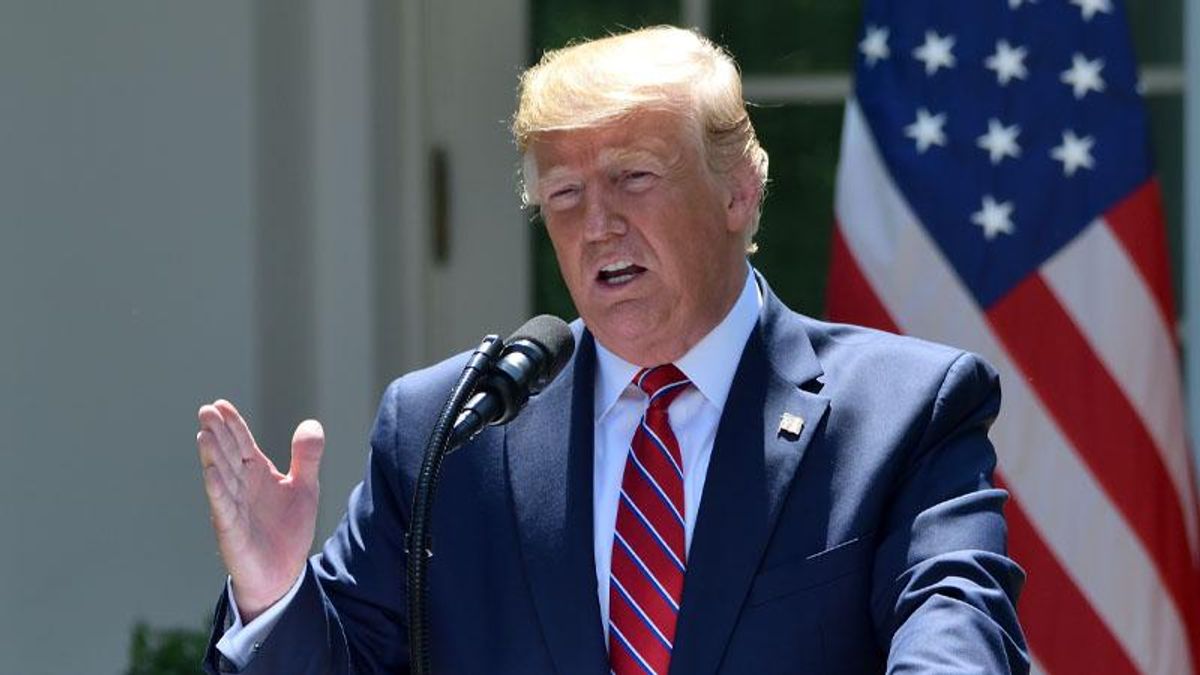 He called Michigan Republican Party Chair Ron Weiser about a so-called audit of Michigan's 2020 election, according to remarks made by Michigan GOP Co-Chair Meshawn Maddock. It's not clear when the call took place.

This article was originally published at Michigan Advance

The call was first reported by the Detroit News, which obtained a recording of the 14th Congressional District Republican Committee's picnic where Maddock discussed the conversation.

When asked about the probability of an audit taking place, Maddock put a spotlight on the audit run by Trump backers that took place in Maricopa County, Ariz., under the order of the GOP-controlled Arizona Senate that doesn't meet standards set by election officials. The process was chaotic, as the Arizona Mirror has reported, and results of the audit still have not been released.

“President Trump called and spoke to Chairman Weiser, and they had a conversation," Maddock told the crowd. “And Chairman Weiser said that he's going to pay close attention to what happens coming out of Arizona."

The Michigan Legislature would have to initiate another audit process. Maddock is married to state Rep. Matt Maddock (R-Milford). Both were in Washington, D.C., for pro-Trump protests before the Jan. 6 insurrection at the U.S. Capitol to overturn the 2020 election results.

More than 250 election audits have been conducted in Michigan by Secretary of State Jocelyn Benson and local election clerks. Each found no evidence of fraud or concern about the security of the state's election.

Current President Joe Biden beat Trump in the state by over 154,000 votes.

Meshawn Maddock noted that Arizona would only need about 10,000 votes to supposedly show a Trump victory, while “Michigan would need 150,000." She said “it was a fair thing for the chair to say to the president, 'Let's see what happens in Arizona and we'll look at it again.'"

In a statement to the Advance, Michigan GOP spokesperson Sarah Anderson did not mention the phone call between Trump and Weiser or the potential election audit, but did express that Weiser and the Michigan GOP have an interest in making elections in Michigan more “secure."

“With a large number of voters (Republicans, Democrats, and Independents) not trusting the integrity of our elections, the Michigan Republican Party and Chairman Weiser are absolutely interested in securing elections and restoring faith in the process," Anderson said.

This week, Michigan Republicans launched the Secure MI Vote ballot initiative to restrict voting. Dozens of bills have been introduced, and several passed, in the GOP-led Legislature, following the trend in 47 other states after Trump's 2020 loss.

In Michigan, the Legislature has the power to approve a citizen-led petition and Democratic Gov. Gretchen Whitmer would have no power to veto. This is the technique that was successfully used by the conservative Unlock Michigan group to overturn a 1945 law Whitmer had used early in the COVID-19 pandemic to issue health orders.

Maddock discussed both the voting restriction petition and a new one from Unlock Michigan that would further restrict local and state health orders. Unlock Michigan has raised $2.8 million in direct contributions for their efforts, with their third-highest donor being Weiser, who donated $100,000.

Maddock revealed later in the meeting on Sunday that Weiser has given the Michigan GOP $2 million since he was elected chair earlier this year. Under Michigan campaign finance law, it is often hard to track money given to political parties.

“He put $2 million into a separate account that is for county parties and district parties to raise money if their people will get out and knock doors," Maddock said. “These are real dollars out of his personal funds."

Republican activists were clamoring for a so-called “forensic audit" earlier this year. In June, activists delivered 7,000 signed affidavits to Republican leaders calling for one. Secretary of State Jocelyn Benson tweeted that “a forensic audit is not a thing,"

Rep. Steve Carra (R-St. Joseph) also introduced HB 5091 later in June that would establish a bipartisan audit board to conduct a “forensic audit" of the 2020 general election. The bill was referred to the House Committee on Government Operations, where bills have previously gone to die.

Trump has been keeping an eye on Michigan. He sent out an email in June targeting Senate Majority Leader Mike Shirkey (R-Clarklake) and Oversight Chair Ed McBroom (R-Vulcan) after the Michigan Senate Oversight Committee released a 35-page report concluding that there is was no evidence of voter fraud in the 2020 election.

In a statement on Aug. 12, Trump again critiqued Republicans for “standing in the way" of a “forensic audit" in Michigan.

“The voters are demanding it because they have no confidence in their elections after the rigged 2020 presidential election scam." Trump said.