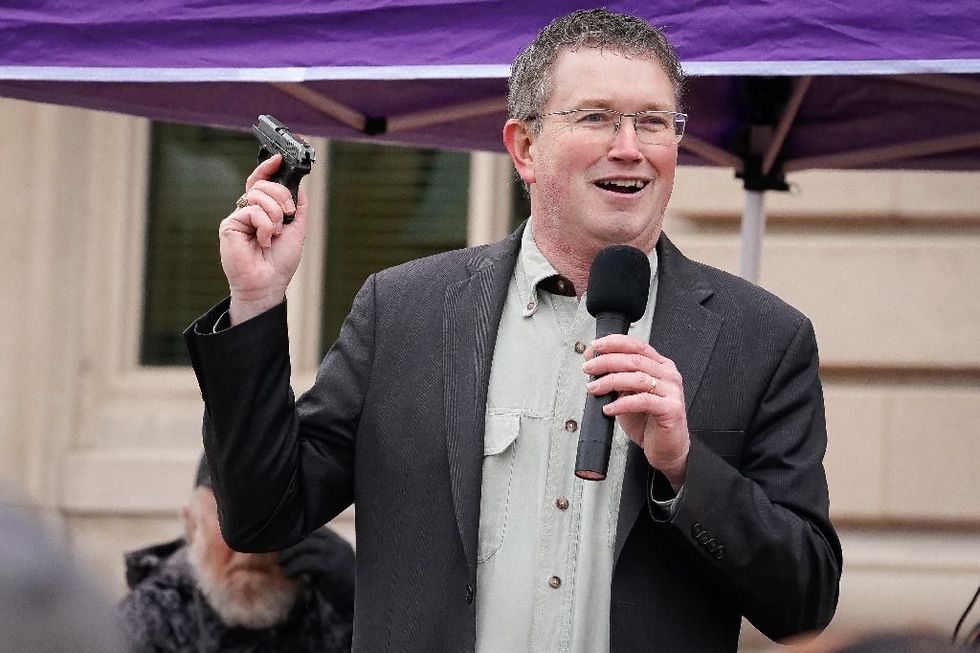 US Representative Thomas Massie drew a Ruger LCP handgun from his pocket during a rally in support of gun rights on January 31, 2020 in Frankfort, Kentucky

Washington (AFP) - A US congressman is under fire for posting a picture of his family smiling and holding guns in front of a Christmas tree days after a deadly school shooting rocked the country.

Thomas Massie, a representative for the staunchly Republican state of Kentucky, posted the photo of himself and six members of his family, each grinning and gripping a gun, on Saturday with the words "Merry Christmas! ps. Santa, please bring ammo."

"Disgraceful," wrote John Yarmuth, a Democratic congressman from Kentucky, saying such messages from pro-gun Republicans "openly rub the murder of children in our faces like they scored a touchdown."

Adam Kinzinger, a Republican congressman for Illinois, tweeted that he supported US gun rights, but "this isn't supporting right to keep and bear arms, this is a gun fetish."

Fred Guttenberg, whose daughter was killed in the United States' deadliest-ever school shooting in Parkland, Florida in 2018, hit back at Massie's post with one of his own.

"@RepThomasMassie, since we are sharing family photos, here are mine," he wrote. "One is the last photo that I ever took of Jaime, the other is where she is buried."

Manuel Oliver, whose son Joaquin was also killed in Parkland, was being interviewed on CNN about gun control as Massie's post was trending.

"That's a huge part of the problem," he said after being shown the post. "This is also something that should teach us who we should elect and not."

Massie garnered support from other corners, with right-wing commentator Candace Owens tweeting to her nearly three million followers: "Can somebody explain to me how they worked out that the Michigan school shooting is (Massie's) fault because he shared a picture of him and his family holding legal fire arms?"

Fifteen-year-old Ethan Crumbley is charged with murder and terror charges over the Michigan shooting, while his parents, James and Jennifer Crumbley, are charged with involuntary manslaughter for providing him with a gun and failing to heed multiple warning signs before the tragedy.

The Michigan attack, which renewed scrutiny over gun control and school safety, was the deadliest school shooting out of more than 130 so far this year, according to Everytown For Gun Safety, a group which keeps statistics of mass shootings and lobbies for gun control.