Who has not contemplated how a memory is formed, a sentence generated, a sunset appreciated, a creative act performed or a heinous crime committed?

The human brain is a three-pound organ that remains largely an enigma. But most people have heard of the brain’s gray matter, which is needed for cognitive functions such as learning, remembering and reasoning.

More specifically, gray matter refers to regions throughout the brain where nerve cells – known as neurons – are concentrated. The region considered most important for cognition is the cerebral cortex, a thin layer of gray matter on the brain’s surface.

But the other half of the brain – the white matter – is often overlooked. White matter lies below the cortex and also deeper in the brain. Wherever it is found, white matter connects neurons within the gray matter to each other.

I am a professor of neurology and psychiatry and the director of the behavioral neurology section at the University of Colorado Medical School. My work involves the evaluation, treatment and investigation of older adults with dementia and younger people with traumatic brain injury. 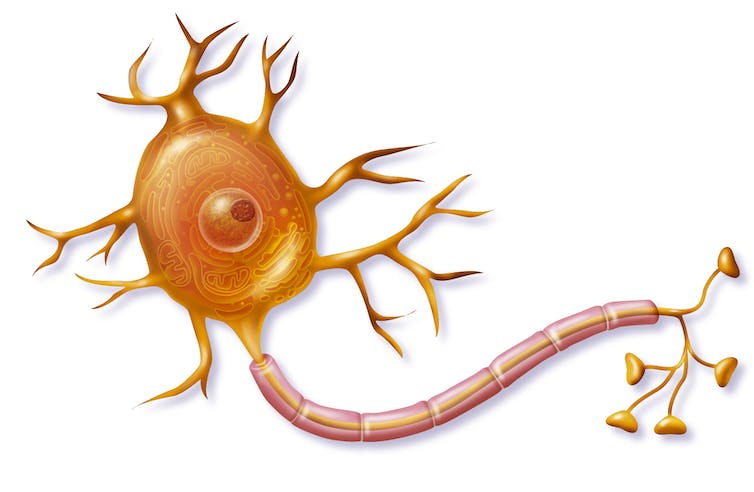 The approximately 100 billion neurons in the human brain are connected to each other by axons, many of which are surrounded by the myelin sheath. These axons, together with their myelin, make up the white matter, which helps facilitate communication between neurons throughout the brain.

Figuring out the white matter

This lack of recognition largely stems from the difficulty in studying white matter. Because it’s located below the surface of the brain, even the most high-tech imaging can’t easily resolve its details. But recent findings, made possible by advancements in brain imaging and autopsy examinations, are beginning to show researchers how critical white matter is.

White matter is comprised of many billions of axons, which are like long cables that carry electrical signals. Think of them as elongated tails that act as extensions of the neurons. The axons connect neurons to each other at junctions called synapses. That is where communication between neurons takes place.

Axons come together in bundles, or tracts, that course throughout the brain. Placed end to end, their combined length in a single human brain is approximately 85,000 miles. Many axons are insulated with myelin, a layer of mostly fat that speeds up electrical signaling, or communication, between neurons by up to 100 times.

This increased speed is crucial for all brain functions and is partly why Homo sapiens have unique mental capacities. While there’s no doubt our large brains are due to evolution’s addition of neurons over eons, there has been an even greater increase in white matter over evolutionary time.

This little-known fact has profound implications. The increased volume of white matter – mainly from the myelin sheaths that surround axons – enhances the efficiency of neurons in the gray matter to optimize brain function.

Imagine a nation of cities that are all functioning independently, but not linked to other cities by roads, wires, the internet or any other connections. This scenario would be analogous to the brain without white matter. Higher functions like language and memory are organized into networks in which gray matter regions are connected by white matter tracts. The more extensive and efficient those connections, the better the brain works.

Given its essential role in the connections between brain cells, damaged white matter can disturb any aspect of cognitive or emotional function. White matter pathology is present in many brain disorders and can be severe enough to cause dementia. Damage to myelin is common in these disorders, and when the disease or injury is more severe, axons can also be damaged.

More than 30 years ago, my colleagues and I described this syndrome as white matter dementia. In this condition, the dysfunctional white matter is no longer adequately performing as a connector, meaning that the gray matter cannot act together in a seamless and synchronous manner. The brain, in essence, has been disconnected from itself.

Equally important is the possibility that white matter dysfunction plays a role in many diseases currently thought to originate in gray matter. Some of these diseases stubbornly defy understanding. For example, I suspect white matter damage may be critical in the early phases of Alzheimer’s disease and traumatic brain injury.

Alzheimer’s is the most common type of dementia in older individuals. It can impair cognitive function and rob people of their very identity. No cure or effective treatment exists. Ever since Alois Alzheimer’s 1907 observations of gray matter proteins – called amyloid and tau – neuroscientists have believed the buildup of these proteins is the central problem behind Alzheimer’s. Yet many drugs that remove these proteins do not stop the patients’ cognitive decline.

Recent findings increasingly suggest that white matter damage – preceding the accumulation of those proteins – may be the true culprit. As brains age, they often experience gradual loss of blood flow from the narrowing of vessels that convey blood from the heart. Lower blood flow heavily impacts white matter.

Patients with traumatic brain injury, particularly those with moderate or severe injuries, can have lifelong disability. One of the most ominous outcomes of TBI is chronic traumatic encephalopathy, a brain disease believed to cause progressive and irreversible dementia. In TBI patients, the accumulation of tau protein in gray matter is evident.

Researchers have long recognized that white matter damage is common in people who have sustained a TBI. Observations from the brains of those with repetitive traumatic brain injuries – football players and military veterans have been frequently studied – have shown that white matter damage is prominent, and may precede the appearance of tangled proteins in the gray matter.

Among scientists, there is a burgeoning excitement over the new interest in white matter. Researchers are now beginning to acknowledge that the traditional focus on the study of gray matter has not produced the results they hoped. Learning more about the half of the brain known as white matter may help us in the years ahead to find the answers needed to alleviate the suffering of millions.

[Get more science, health and technology news. Sign up for The Conversation’s weekly science newsletter.]