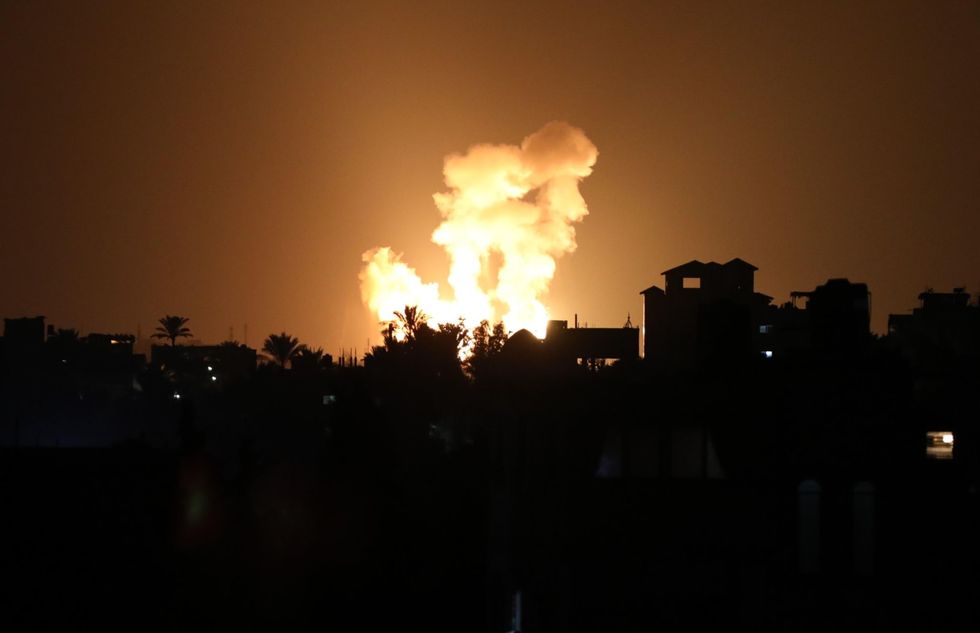 A ball of fire rises above a building after an Israeli airstrike in Khan Yunis. Ashraf Amra/APA Images via ZUMA Press Wire/dpa

A teenager has been killed in a raid by the Israeli military in the occupied West Bank, according to the Palestinian rescue services.

The 15-year-old was shot in the head, the Health Ministry in Ramallah announced on Tuesday.

According to the army, soldiers had arrested a suspect for terrorist activities in a refugee camp in Nablus. In the process, the soldiers came under fire from surrounding rooftops, it said. The troops fired back.

Among other things, Palestinians threw stone blocks from buildings at the troops. Soldiers saw a suspect try to throw a large object at a soldier below him, they said. "One of the soldier's responded with live fire and a hit was identified," the Israeli army said.

There were no injuries on the Israeli side, the army said.

The army described the strikes as a reaction to incendiary balloons sent to Israel from Gaza on Monday, as well as to machine-gun fire from Hamas.

Palestinian militants repeatedly fly balloons with explosive and incendiary devices from the Gaza Strip into Israel.

These often cause fires in southern Israel.

The Israeli air force had previously attacked several Hamas positions in the Gaza Strip after confrontations at the Gaza border fence on Saturday.

Following the latest clashes, two Palestinians, aged 13 and 14, and an Israeli border policeman are in critical condition, according to official reports.

Egypt subsequently closed the Rafah border crossing between Gaza and Sinai, according to Hamas.

Egyptian security sources said that this was due to maintenance work.

Israeli radio, on the other hand, reported that it was a response to the clashes.

In May, Israel and Palestinian militants engaged in an armed conflict for 11 days.

According to the Ministry of Health, 255 people died in the Gaza Strip. In Israel, there were 13 deaths, according to official figures.

The EU, Israel and the US classify Hamas as a terrorist organization.