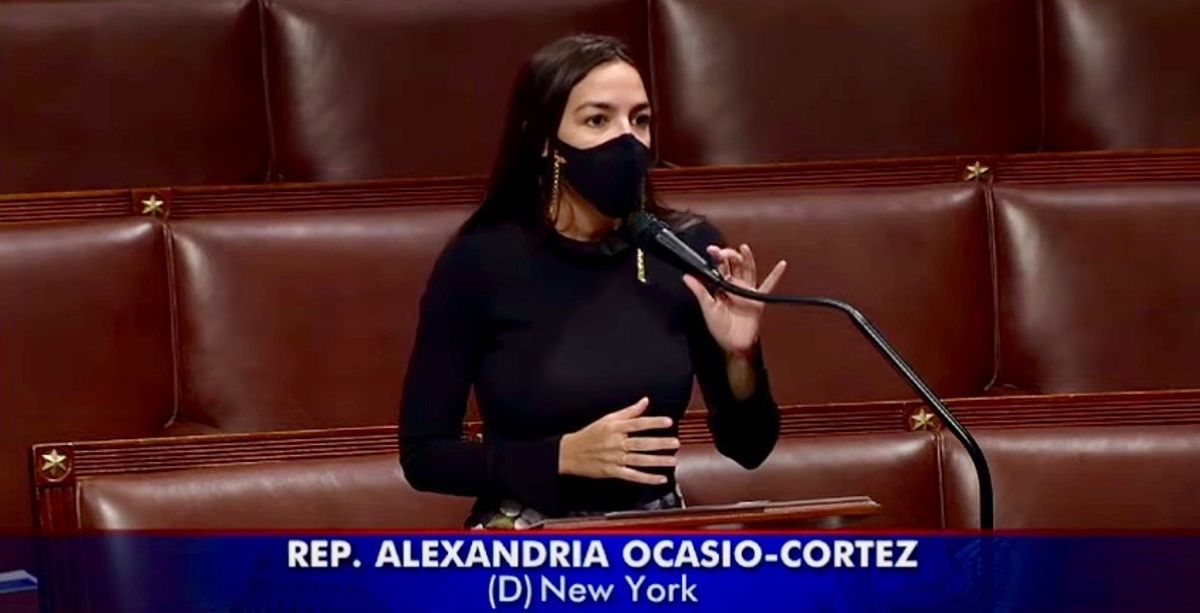 While there is much for progressives to applaud in President-elect Joe Biden's newly released $1.9 trillion coronavirus relief package—from a $15-an-hour federal minimum wage to billions in funding for vaccine distribution—Rep. Alexandria Ocasio-Cortez said Thursday that the $1,400 direct payments included in the plan fall short of the promise that helped Democrats win control of the U.S. Senate.

On the eve of the Senate runoffs in Georgia, Biden told the state's voters that "$2,000 checks" would "go out the door" if they elected Democrats Raphael Warnock and Jon Ossoff, who both embraced the push for $2,000 checks on the campaign trail and ultimately defeated their Republican opponents.

"There's no one in America with more power to make that happen than you, the citizens of Atlanta, the citizens of Georgia, and that's not an exaggeration," the president-elect said of the $2,000 payments. "That's literally true."

But the Biden camp and others contend the plan was always to provide $1,400 checks on top of the $600 approved under a relief measure that President Donald Trump signed into law last month, not an additional $2,000 check—even though, in their messaging, Biden and Vice President-elect Kamala Harris continued to call for "$2,000 stimulus checks" after the $600 payments were already distributed to many Americans.

In response to one journalist's claim that Ocasio-Cortez is engaging in "goalpost-moving" by demanding $2,000 checks instead of the proposed $1,400 payments, progressive organizer Claire Sandberg tweeted that "Biden is the one who moved the goalpost."

"In a last-ditch effort to win the Senate, he said that '$2,000 checks' would 'go out the door' if Warnock and Ossoff won," said Sandberg, former national organizing director for Sen. Bernie Sanders (I-Vt.). "Warnock posted this realistic image of a $2,000 Treasury check!"

On the whole, progressives largely welcomed Biden's nearly $2 trillion relief proposal as a solid first step while stressing that it is not sufficient to fully bring the U.S. economy out of deep recession and confront the ongoing coronavirus pandemic, which has killed more than 388,000 people in the United States. Some economists have argued (pdf) that Congress must approve between $3-4.5 trillion in spending in the short-term to set the stage for a strong recovery.

It is far from clear how much of Biden's initial offer will become law, given that Democrats will control the Senate by the narrowest possible margin and thus be unable to afford any Democratic defections. Potentially making matters more difficult is Biden's insistence on attaining enough bipartisan support to push the proposal through the Senate with 60 votes.

The New York Times reported that top House and Senate Democrats "are preparing to pivot quickly to a parliamentary process known as budget reconciliation" if Biden fails to win the support of enough Republican lawmakers. Only a simple majority in the Senate is needed to pass bills through the reconciliation process, which Republicans used to ram through their massive tax cuts for the rich in 2017.

Sanders, the incoming chairman of the Senate Budget Committee, vowed earlier this week to use the reconciliation process to "boldly address the needs of working families."

In a statement late Thursday, the Vermont senator said Biden "has put forth a very strong first installment of an emergency relief plan that will begin to provide desperately needed assistance to tens of millions of working families facing economic hardship during the pandemic." On top of $1,400 direct payments to many Americans—including adult dependents—the president-elect also proposed increasing the current $300-per-week federal unemployment supplement to $400 and extending emergency jobless programs through September.

"The president-elect's Covid relief plan includes many initiatives that the American people want and need, including increasing the $600 direct payments to $2,000, and raising the minimum wage to $15 an hour," Sanders continued. "As the incoming chairman of the Senate Budget Committee, I look forward to working with the president-elect and my colleagues in Congress to provide bold emergency relief to the American people as soon as possible."