Joe Manchin condemned for refusal to back $2,000 survival checks after Democrats win the Senate 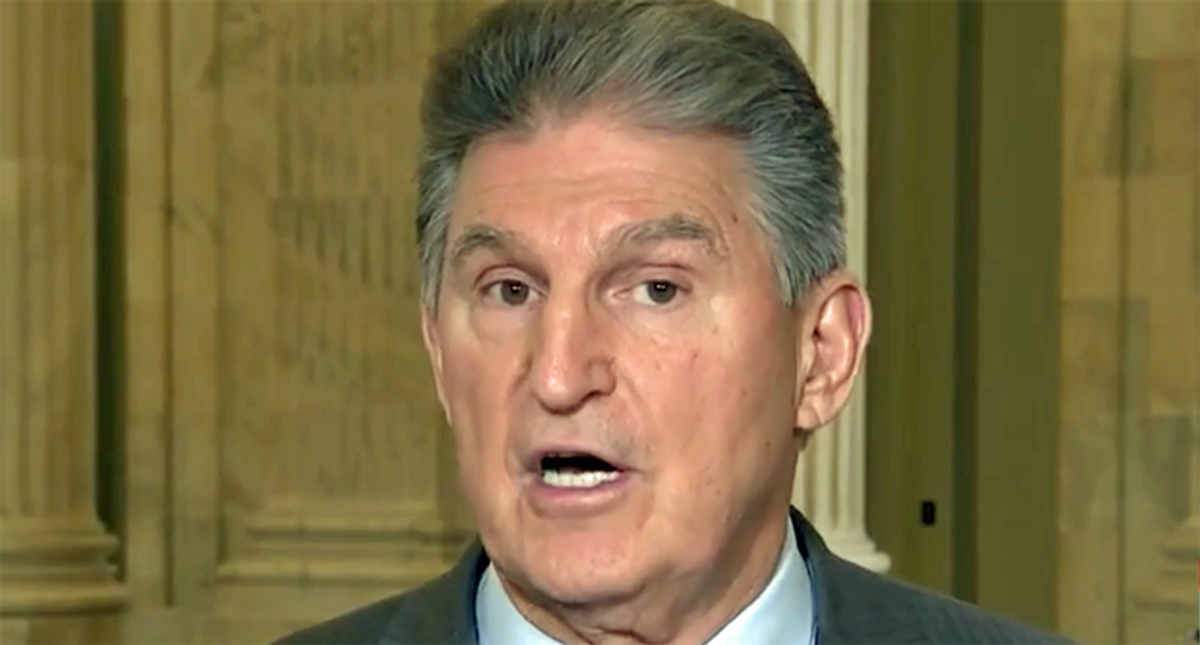 Days after the crucial victories of new Democratic Sens.-elect Jon Ossoff and Raphael Warnock were credited in large part to clear messaging about the need for a Democrat-controlled Senate in order to send $2,000 checks to American households, Sen. Joe Manchin on Friday provoked scorn Friday by saying he would "absolutely not" support providing such relief.

Manchin told the Washington Post he believes vaccine distribution should be "job number one" for Democrats, despite the fact that additional funding for coronavirus vaccines is expected to be included in the package the incoming administration of President-elect Joe Biden is developing.

"Joe Manchin is worth an estimated $7 million. At least 70% of West Virginia households would qualify for $2,000 checks."
—Andrew Perez, Daily Poster

The conservative West Virginia Democrat expressed concern that people who have not lost income at this point as a result of the pandemic would potentially receive $2,000 checks, in addition to those who currently are in dire need of relief.

"How is the money that we invest now going to help us best to get jobs back and get people employed? And I can't tell you that sending another check out is gonna do that to a person that's already got a check," Manchin told the Post.

As more than 125 economists from institutions including Harvard, Princeton, and Berkeley told lawmakers in November, direct payments to a wide swath of American households "are one of the quickest, most equitable, and most effective ways to get families and the economy back on track" amid 6.7% unemployment and an economic crisis which has caused more than half of American adults to lose income, left nearly 26 million people unable to afford basic essentials like groceries, and caused an estimated 12 million renters to fall thousands of dollars behind in their rent payments.

The legislation Biden's team is currently working on would include extended unemployment benefits as well as direct payments and funding for state and local governments. Under the control of Sen. Mitch McConnell (R-Ky.), who opposes $2,000 payments and funding for states and cities, the Senate has failed to pass legislation including more than $600 payments since last March, when the CARES Act was passed.

Gaining a Democratic majority in the upper chamber has been thought to be the key to ensuring people across the country receive meaningful aid after nearly 10 months of receiving no direct payments, and nearly half a year without the enhanced unemployment benefits included in the CARES Act, which were credited with reducing poverty but were allowed to lapse by the Republican Party last summer.

Ossoff and Warnock's victories in Georgia, following two months of tireless get-out-the-vote efforts by organizers with groups including Mijente and the New Georgia Project, give Democrats control of the senate, with a 50-50 split and Vice President-elect Kamala Harris acting as tiebreaker if the Democrats use Senate rules allowing them to pass the coronavirus relief package with a simple majority.

With the close margin, the loss of Manchin's vote could force Biden to drastically change his proposal, the Post reported—just after he called on Georgia voters to support Ossoff and Warnock to make sure "those $2,000 checks will go out the door, restoring hope and decency and honor for so many people who are struggling right now."

Saikat Chakrabarti, co-founder of Justice Democrats, denounced Manchin for coming out against the $2,000 payments—saying the senator's comment "already hurts the Democrats," even before the actual vote takes place.

"We won Georgia because we promised $2,000 checks," Chakrabarti tweeted. "Joe Manchin is threatening the Democratic majority in the Senate if he goes against it, and for no reason."

Daily Poster editor Andrew Perez noted that by threatening the party's ability to ensure Americans receive relief checks, Manchin will do measurable harm to his own constituents, 40% of whom are facing food insecurity.

"Joe Manchin should talk to the working class West Virginians he's supposed to represent and see what they think about him saying 'absolutely not' to the $2,000 relief checks that 80% of Americans support in the middle of the worst economic pain since the Great Depression," added Democracy Spring founder Kai Newkirk.

People for Bernie suggested that with 78% of Democratic voters, 60% of independents, and 54% percent of Republicans supporting $2,000 checks, according to Data for Progress, Manchin will ultimately harm his own political career should he vote against the legislation.

"No one will forget," the group tweeted.