Openly frustrated by what they see as an ongoing double standard in the press’s treatment of his campaign, Sen. John McCain and his aides have been aggressively denouncing unfavorable stories as “smear jobs” and “scurrilous attacks,” while the candidate himself has launched a series of stinging attacks on Sen. Barack Obama.

It’s a dangerous posture for a candidate whose political success is intimately tied with his image as an irrepressible happy warrior — equal parts President Ronald Reagan and Vice President Hubert Humphrey, with a dash of his old Arizona buddy Rep. Mo Udall’s sharp sense of humor — and whose appeal to independents owes nearly as much to character and personal narrative as to issues and ideology.

Shorter Politico: I thought we were friends, John! Friends! You even signed my yearbook!

The rest of the article is simply a bunch of theorized ways in which McCain could go crazy and do angry ninja shit, all of which is motivated by the same barely concealed sense of violation - John McCain spent years wining and dining (literally) a press corps from his perch of being Maverick McMaverick. Now that he's in a position where something's actually at risk and he's running as the standard bearer of a party rather than your cool friend with the kickass house and the party bus, he's got to actually start treating the media like he's *gasp* a Republican. 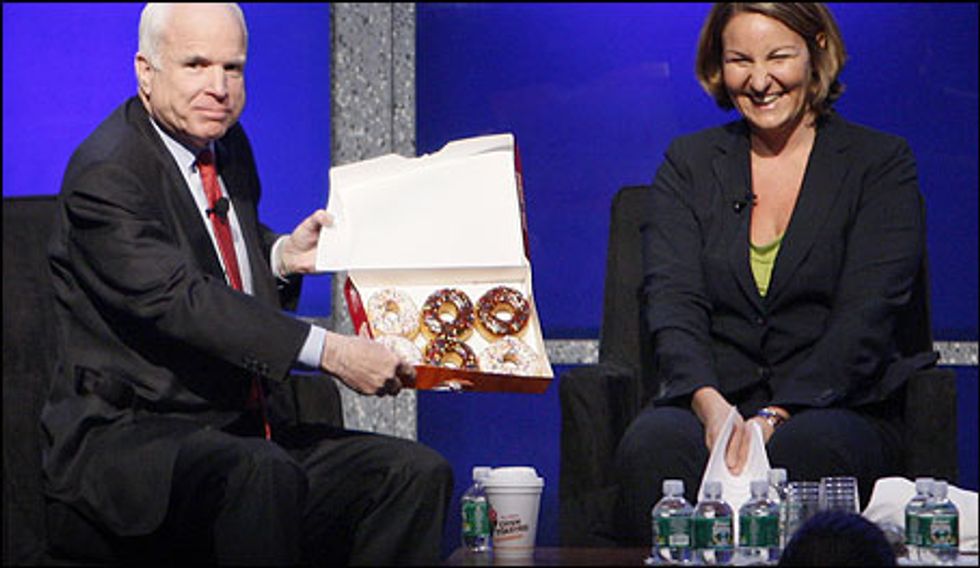 If you look at the arc of McCain's career, the one thing that stands out is that he's never actually been in danger of...anything, really. He hasn't been in a truly close race since the 1980s, and he hasn't had to seriously fight a Democrat in a winner-take-all format since the same time. It was always easy for him to be the media's best friend (and boy, are they friendly) precisely because he never had anything to lose - either he was so far behind (2000 and most of 2007) that being friendly to the media got him credibility and cachet to carry him through or so far ahead that bad coverage really didn't matter.

The primary season was effectively a joke. McCain managed to beat a cousin-marrier, a walking corpse, a shiny-haired cultist, a paranoid, elfin obstetrician and a nice guy who used to be really fat (but was still, like all the rest of these guys, broke).

I think John McCain might be an anime character.

This is the first time in more than 20 years that McCain's faced an actual challenge, and certainly the first time since he defeated the Four Winds of Mesa Hills Country Club and inherited the mantle of Maverick of Mavericks that something's truly, honestly been this credibly close and in danger of being taken from him. Reporters, I'd stop planning on sharing quiche recipes with him and start planning on hearing how you're worthless vultures giving a black guy an easy ride because of your liberal guilt.

Don't say I didn't warn you. Or offer up a better dry rub recipe, if you want it.