McCain must have money on Obama 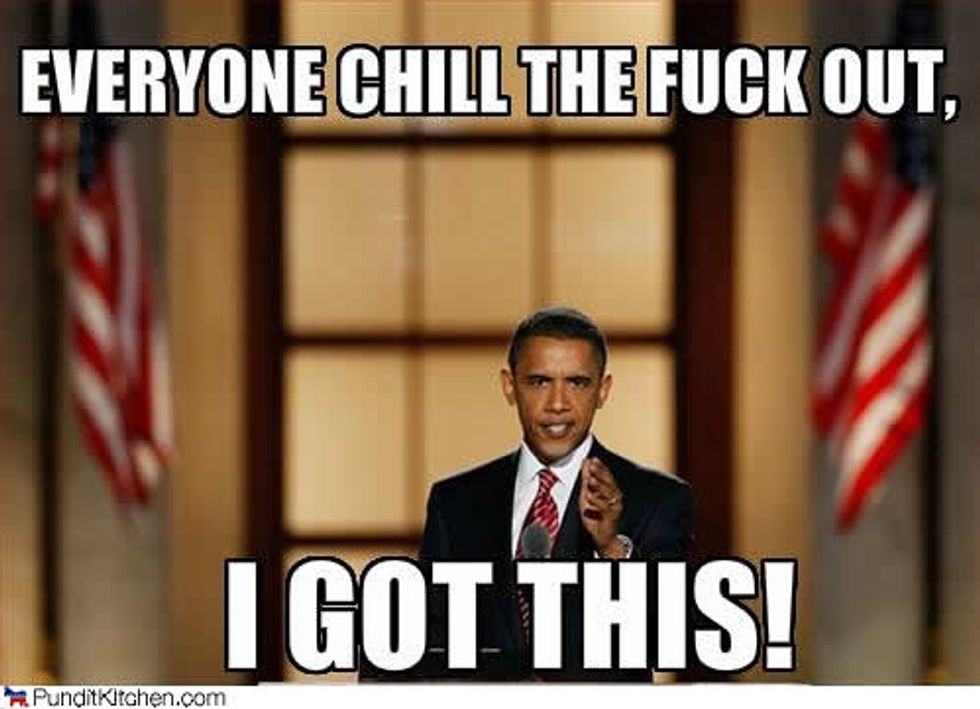 That's the only thing that makes sense. The hare-brained scheme to duck the debates by pretending to be above it all isn't fooling anyone---even the grumpy trolls defending it on the blogs see it as a political ploy, but just applaud McCain for appealing to their anti-social, "fuck the voters" mentality. Walter Shapiro at Salon has a piece analyzing this move, and you can tell his mental status resembles the conversation in my house this morning.

Me: I think McCain has money on Obama.

Marc: I don't know. The McCain campaign has done things that didn't make sense to us, but ended up being good for them.

When someone does something this crazy, you have to wonder if they know something you don't know. Shapiro seems to be coming from the same place, pretty sure that this is pure bonehead, but afraid of coming out and saying so, because what if McCain's insanity is actual secret genius? So we get passages like this:

But whatever McCain's underlying motivations, both campaigns are now locked in a bizarre game of chicken. If McCain actually boycotts the Oxford debate, Obama may score a public-relations coup while his Republican rival looks weak and evasive. Or the Democratic nominee may appear too political while McCain puts on his mantle as statesman. Republican strategist Rich Galen, who advised Fred Thompson in the primaries, said, "It's a brilliant stroke by McCain. You will have an empty chair debate in Oxford without McCain. And an empty chair at the White House economic negotiations without Obama."

The fact of the matter, though, is that the best person Shapiro could get to applaud this move helped run the campaign of someone with impeccable wingnut-appealing credentials (he looks manly on the teevee) into the ground during the primaries, so I don't trust him. Giuliani had a better campaign.

And even if it was something close a toss-up between "too important a man for this piddly shit" and "evasive asshole who doesn't think he has to talk to you people", that will easily be rectified by Obama and the mainstream media that McCain is throwing the finger to. If Obama is actually on stage with an empty chair beside him, it's not like he's going to sit there looking stupid, right? Surely that means he gets a chance to speak, at least for a little while, and I have no doubt how he's going to spin it. He's already doing so.

Speaking to reporters at an impromptu Florida press conference, Obama said that if all senators needed to be in Washington for the interim, "We've both got big planes. We've painted our slogans on the sides of them. They can get us from Washington, D.C., to Mississippi fairly quickly."

And even if wasn't already coming out strong on this, once you've committed to showing up, you have no other choice.

But more to the point, McCain is telling the mainstream media that he thinks they're a bunch of no-count losers and he doesn't need them to win. After all, the entire weekend talk show cycle has no doubt been scheduled and booked to discuss this debate. McCain was always their best buddy, and now he's saying the New York Times doesn't practice journalism and basically insulting their very existence. And this has been building up---even Fox News is angry about access issues. If McCain doesn't show up, the narrative that will shape up on the Sunday talk shows will be, "McCain is a coward."

It's no secret that McCain is an overly dramatic crybaby tantrum-thrower. Look, the man called his wife a cunt in front of journalists because she had the audacity to tease him. Everyone knows he's a screamer. This whole stunt is probably one more example of this personality flaw of his. But I think there's something else to it. I think McCain is really scarred by the ass-whupping that the Bush campaign delivered him in 2000, and ever since then, he has decided to out-Bush Bush. For example, Bush is a liar. So McCain is going to be an even more audacious liar. And one of Bush's favorite tricks was to limit access to the press so that they craved more from him and were willing to kiss his ass to get to him. But McCain clearly doesn't know how to play peek-a-boo properly. Bush knew his audience well enough to know that times of crisis are when you deign to go out and talk to the press, preferably in some kind of manly man costume. Then you give off the impression that you're like a superhero, hiding most of the time, but swooping out to save the day when necessary. The only time he fucked this up was when 9/11 caught him with his pants down.* And as soon as he recovered, he was at Ground Zero with a construction hat and a megaphone. That's how you play that game. From a P.R. perspective, it seems that the timing of this bailout request and the debates couldn't be better, because the audience will be craving displays of leadership and you've got a camera pointed right at you.

Seriously, I hope he boycotts it. So that the only person on camera offering leadership is Barack Obama.

*This is conclusive evidence that Bush's people didn't orchestrate it. Why would they forget the most important element, which is getting him in front of the cameras with some dazzling rhetoric that they'd spent weeks or months preparing?