One day some conservative will make a campaign claim in good faith.....maybe 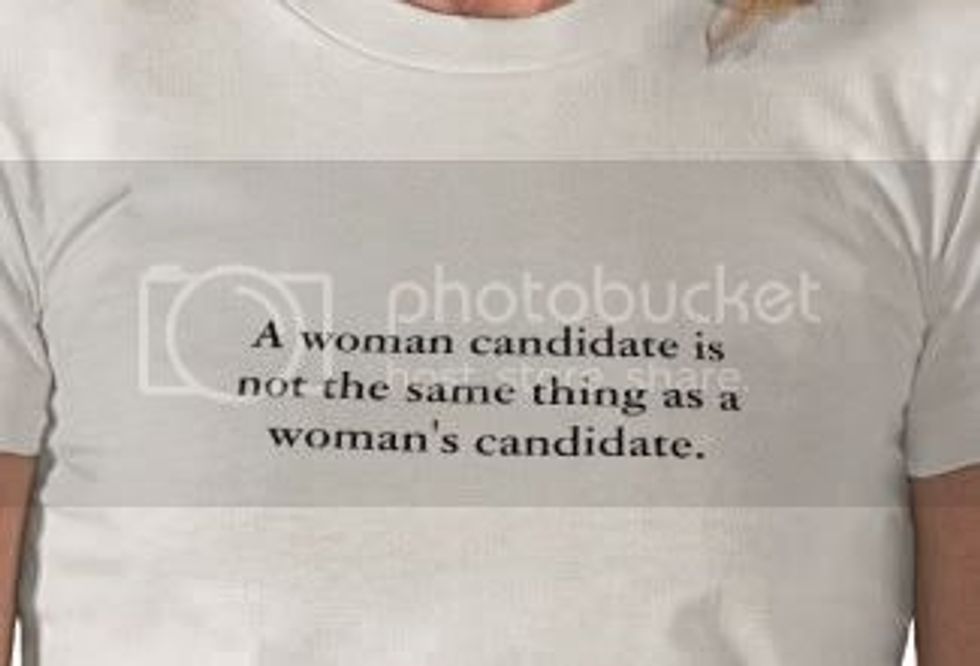 Cathy Young argues today that the reason Sarah Palin makes feminists so upset is that she's all successful and stuff, and we're just jealous bitches. Yeah, that's the ticket. It has nothing to do with seeing a woman who takes advantage of all the hard work of feminists before her and proceeds to take a piss all over it, refusing to extend the same generosity to other women that was extended to her. I got the link from Scott, and I have to agree with him and with Ann and Miriam that it's despicable how right wingers are trying to use Sarah Palin's nomination to drain the word "feminism" of all meaning. As I said earlier, if you fail to understand the desperate hostility to feminism that's critical to the culture wars, you fail to understand the culture wars. The word "feminism" itself is this fetishized evil for culture warriors. They either try to shame women out of using it, or they try to use it when it's not applicable (such as laughably describing someone who opposes any support for women's equality like Sarah Palin a "feminist"), but they are stuck on hating the word itself and wanting to stomp it out of existence.

You just know this is the silly season when people suddenly act like they don't have the minimum number of brain cells to fire off to understand the concept of female misogyny. (The proper number is 3.) But female misogynists are common critters. They buy into the patriarchal arguments about women's inferiority and, as such, focus their energies on making sure they're the best of the second sex instead of fighting for equality, which they don't think is possible. I wouldn't even necessarily say that all of them have internalized misogyny---women like Ann Coulter, for instance, clearly think they've sassed their way into being honorary men. Many of them eagerly take to new levels the controlling and punishing of female sexuality, again, to distance themselves from the bad girls and thereby gain what little esteem is possible for a woman to gain. It took Ann Althouse's peculiar mix of needing praise from right wing men and her loathing of other women to come up with the idea that Jessica Valenti shouldn't have left her house with her breasts on. They are true believers in the idea that one can be very sexy but also desexualized, which is why Palin is being treated like this giant sex object, because she's got a practiced ability at being fuckable without showing that she might be the sort who wants to fuck.

This, by the way, is why I've never been happy about the notion that men shouldn't call themselves feminists. Since only women are called feminists in the vernacular, the word is easily to redefine as "woman who does anything 'strong'-seeming" instead of "individual who supports feminism, the notion that women are equals". Palin doesn't actually differ from McCain either in her opposition to women's reproductive rights nor, it turns out, her belief that shaming women for being sexual to their face is a fine way to spend your time. Witness:

In 1996, evangelical churches mounted a vigorous campaign to take over the local hospital's community board and ban abortion from the valley. When they succeeded, Bess and Dr. Susan Lemagie, a Palmer OB-GYN, fought back, filing suit on behalf of a local woman who had been forced to travel to Seattle for an abortion. The case was finally decided by the Alaska Supreme Court, which ruled that the hospital must provide valley women with the abortion option.

At one point during the hospital battle, passions ran so hot that local antiabortion activists organized a boisterous picket line outside Dr. Lemagie's office, in an unassuming professional building across from Palmer's Little League field. According to Bess and another community activist, among the protesters trying to disrupt the physician's practice that day was Sarah Palin.

John McCain was mad. Fuming mad. It was then the early days of his political career, and he had paid an unscheduled visit to a Planned Parenthood clinic in Mesa, which was within his Arizona congressional district. That's when Gloria Feldt, then the CEO of the group's local chapter, got a phone call. "Congressman McCain is here," a staffer told her, "and he is screaming and it is upsetting the patients."

Let's not be sexist and judge who's a feminist by what's in their pants. How about what's in their heart? And McCain and Palin share an abiding loathing of all you ladies out there who don't buy into their view of you as theirs to control.