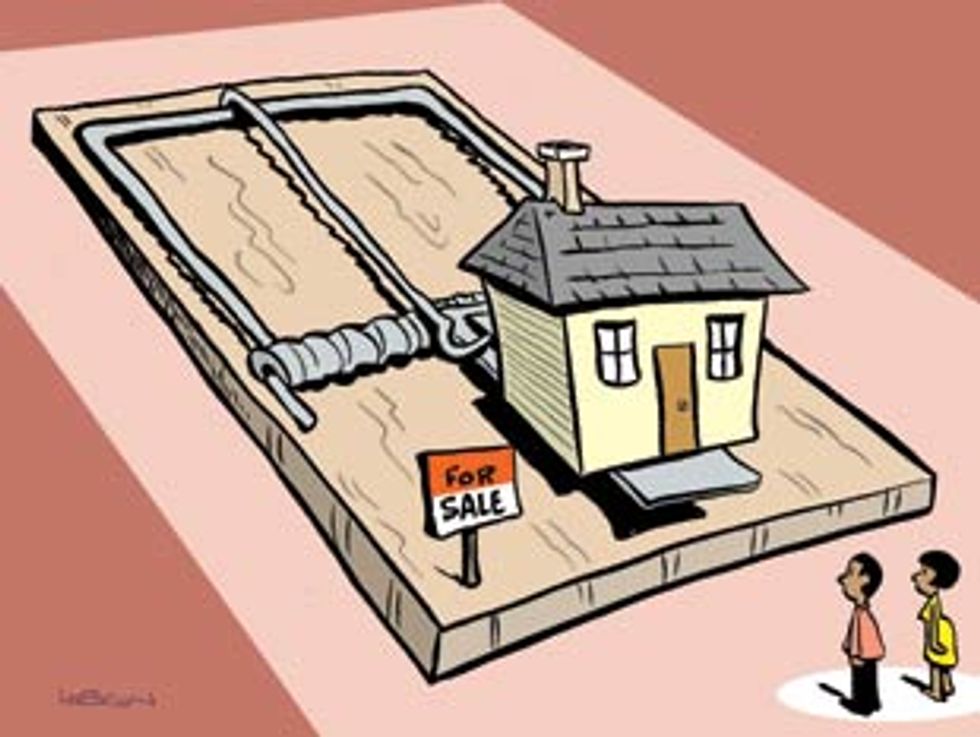 Yeah, a little less than a year ago it was obvious that when the crash came, the wingnuts would blame it on the minorities---here's my take from November 2007. And lo and behold, here we go---time to blame our crisis on the minorities!

Credit Is Not a Civil Right [Mark Krikorian]

I have no way of judging whether the Wall Street bailout is a necessary evil or an impending disaster. But we're in this mess, ultimately, because our political elites thought it was good social policy to encourage banks to give mortgages to uncreditworthy people, resulting in what Sailer months ago called the "Diversity Recession" (if this doesn't work, make that the Diversity Depression). In other words, if poor people in general, or blacks or Hispanics in particular, were less likely to be approved for a mortgage, the only possible reason was racism or classism or whatever. Thus "creditworthiness" was an illegitimate, dead-white-male concept, like middleclassness. Because, after all, isn't everyone entitled to credit? Therefore, I propose any bailout bill start with these words: "It is the sense of Congress that credit is not a civil right."

This idea is just getting started, I predict, because it suits a peculiar form of right wing populism to believe that the banking industry---which has the nerve to have their Bushie proxies demand $700 billion, no strings attached as a bailout---is at the mercy of a bunch of liberal do-gooders will get a lot of traction. The reality, of course, is that liberal do-gooders know that the banking industry will drink your milkshake known as "everything you own", and so tend to work not by guilt-tripping anyone about diversity so much as regulating. And a lack of regulation is more the issue here. But Krikorian and his white supremacist buddy Steve Sailer are working off the fact that risky, subprime loans were largely given to racial minorities, who they automatically assume are shiftless and looking for a handout, and that the only motivation working here was Librul Stoopid.

The only part of that logic train that is remotely true is the part where racial minorities were a disproportionate chunk of the high risk loans. But what they'd have you believe---that bankers were desperate to reach non-existent racial quotas, so they took on high risk loans they were otherwise reluctant to hand out---is 100% bullshit. Back in July 2007, In These Times had an article on the coming crisis that explains how wrong-headed this excuse was long before it was trotted out. The first thing to remember is that the subprime industry exploded for no other reason that base greed. It seemed like handing out these loans was like printing free money for a time. The other thing to remember is that, contrary to the stereotype, only a small percentage of these loans were for home purchase---only 9%, in fact, were first time buyers. Mostly you're looking at refinancing, much of it done to pay down other debts.*

But most importantly, don't forget the part that predatory lending played into this situation. Lenders wanted to write subprime loans because they made so much money off the high interest rates. And they wanted very often to use variable rate mortgages to do this, so that the customers got the bait and switch---thinking they're signing up for one low interest rate, only to see it rise and rise and rise some more in a few months. And guess what communities get targeted by these schemes, and not out of liberal do-gooder feelings, but because they see these communities as full of sitting ducks?

Predatory lending is a particularly widespread problem in low-income and minority communities, where a complex history of housing discrimination, racial segregation and a lack of access to affordable credit have left borrowers with few options. Though redlining, blockbusting and other discriminatory practices were banned in stages between 1968 and 1977, most banks are reluctant to open branches in black neighborhoods, a vacuum that is filled by currency exchanges, payday lenders and now subprime mortgage companies.

“Subprime lenders,” says Smith, “are taking advantage of the fact that they’re the only game in town.” Individual brokers and loan officers make money by taking “points”—that is, charging percentage points of the loan amount, which are added to the borrower’s closing costs—giving them an incentive to maximize the loan amount, regardless of the borrower’s ability to pay for it.

So, really, we're talking the opposite of liberal do-gooderism, but actually, what's the word for it? Oh yeah. Racism. And even if the lenders aren't operating under the racist belief that communities of color are somehow especially gullible,** they were still exploiting the structural racism that allows white communities to have access to banking institution but not so much black communities. But let's not fool ourselves. Open discrimination was actually going on---the higher you went up the income scale, the higher the percentage of risky loans were awarded to black and Hispanic families.

Let's try to put to bed the rumors that this entire crisis has ridden in on the backs of liberal do-gooderism. The last thing we liberal do-gooders want is for fucking housing bubbles that put the price of owning a decent home out of the hands of working class Americans. Seriously, duh. The people who have been sounding the alarm about the housing issues from the beginning were liberals, and from all angles---it was was irresponsible, it undermined the middle class and class mobility, it was a classic neocon scheme to magic money into the air through bullshit, it encouraged the mega-growth of the suburbs. Conservatives keep turning around and finding that they're responsible for yet another catastrophe, and in their desperation, are turning to racism to get out of it. Draw your own parallels with the election.

*Considering how many people go into bankruptcy trying to pay off medical bills, it's worth wondering how much our health insurance crisis fed this housing crisis.

**It's easy to believe black people are gullible when the only gullible people you talk to are black. That's called "confirmation bias".